Recently when Little Shanky 1 and I were reviewing research for his JFK report one thing was clear despite the rhetoric and times - neither JFK nor Khrushchev wanted to destroy the world. This one notion or common fear led to wiser decisions and revelations regarding how we can coexist. We can thank both those leaders for a job well done in laying the groundwork for a peaceful and great time to be on the globe. Things are a bit different now 50 years after the Cuban Missile Crisis. Of course we abused the trust.

Since the 60's we took capitalism and floored it. They were mired in Communism, thus, they got left in the economic rear view mirror. Since then, our banks have abused the Russians. Our capitalists have gone in and plundered what they could of their resources.We've all lived the good life while the former communist nation continues to struggle. Russia has watched as the US debt machine with its world reserve currency lap it several times on the road to excessive consumption.

More recently Russia has noticed our debt machine is beginning to wear out after so many years of heavy use and lack of much needed maintenance. Our fiat is wearing thin. They've noticed our foreign policy had changed from peace keeper to land grabber. They see that our growth and control must expand cause our system demands it. This parasite, the corporatocracy, has consumed the western part of its host and must find something new to quench its hunger.


They also see that our leadership is at its weakest point ever. Let's just say the whole globe knows this administration and congress are a complete joke. Approval ratings prove that, and those are even massaged to make things look better. Perhaps they recognize more than we do the corrupt system we've become. After all, corruption is all they know.

Now Putin has had enough and is finally standing up to our more aggressive posture or attempt to "spread democracy". Furious Russia, Downgraded To Just Above Junk By S&P, Proposes "Scorched Earth" Retaliation Against NATO Countries may have been the last straw that broke the camel's back in this situation. Putin has had enough of our shit, he knows exactly where we stand economically, just how dysfunctional and corrupt our government is and he's tired of our expansion and is putting his foot down.

Good for him. Thank goodness someone is willing to stop our government on its quest for global domination. Russia may not want war, but they will fight. They have ZERO, Niet, нулевой, zilch respect for us. We may run our drones all over MENA but they are not coming to Russia's front door. That ain't happening and they are willing to fuck some shit up if we think we're just gonna waltz into the Ukraine and blow it up the way we did Iraq, Libya, Egypt or Syria.

Now let's look in the mirror at the real problem. We have an arrogant, out of control, complete idiot, puppet president that if he even has a ball sack it may contain nuts the size of atoms (and that may be a compliment). #LOL, #FAIL or insert your favorite # here _____ . I'm sure you have some good ones. Let's just say he's the anti-JFK and peace is not on his agenda. He serves a greater power that's not primarily concerned with your well being.They are more interested in your enslavement than freedom.

The real problem lies in the fact, and we've discussed it here for years at STB, we all knew this was coming. Obummer must and will have a war. I really don't have the time now to go into all the executive orders and detail the destruction of the Constitution that gives him near dictatorial power, but a war, a world war, that would allow him to cancel elections (that are going to be lost) and entrench him as ruler and chief is a must for them now.

The war will be to cover the coming financial collapse. It will allow debt cancellation. It will be to entrench the fiat world reserve currency till the Bankor, the NWO one world government currency, can be established. This fucker wants to rule the GLOBE, and all good religious folk know this means he then can only be one person.

You need to be terribly afraid of the powers that run this nation. Going back to Eisenhower and JFK - they SPECIFICALLY warned us of the agenda of the secret societies. JFK tried to fight back and lost. Even our founding fathers new of this group and did their best to stop them. Now these powers that be have the presidential puppet that will do their ultimate bidding. The time is now for them to make their move.

The Ukraine crisis is not about Russian aggression, it's a (not so) carefully contrived CIA co-op that's put us in the middle of a much desired conflict. One that may lead to an us or them survival situation, and the friggin idiots in the white house may be walking into a gunfight with only their peckers in their hand. You are about to see the consequences of the combining of corruption with dysfunction.

I'm running late so more on the minis and targets below in commentary.

Minis 4hr - Blue channel down. Green rising channel failed at blue resistance. Could be a nasty spot. The Easter holiday ramp to happiness may be about to be proven the farce it really was. 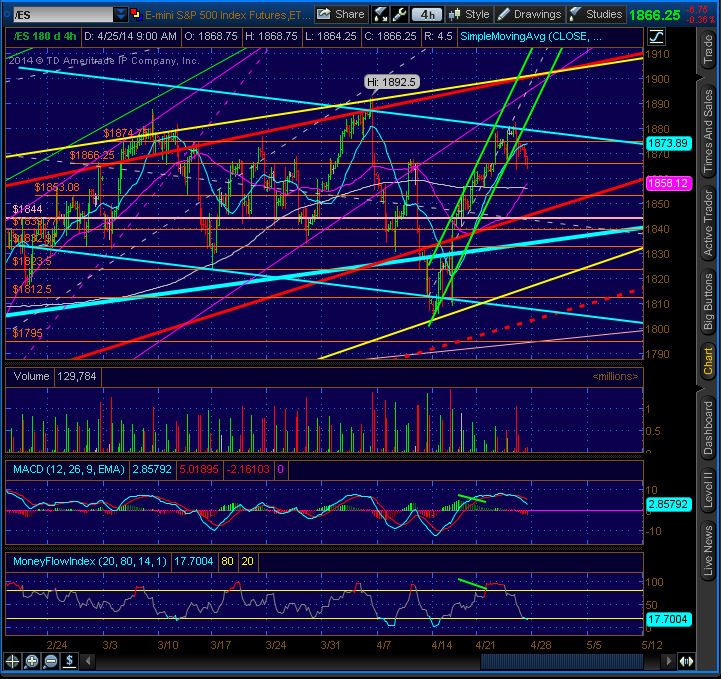