Well, someone round here unfavorably warned of the possibility of a war/taper OFF scenario that would cause a rally a few weeks back in the comments section. That someone has also been warning of a retracement over 61% and what that's led to almost every time over the past four years. These suckers got all the bases covered, and until they don't it will remain business as usual. Suck the shorts in and then commence the slaughter.

Now I'm not Sure if the Summers is out news is exactly taper OFF, but one that was perceived as a super hawk (more like Dr. of Death) has been removed from the equation. This brought great hope to the OFF bulltard crowd that fully understands that an ON situation would be a complete nightmare for the equity markets.

The reactions across the board to Summer's out are quite hilarious. Maybe the little guy actually won a battle here. The man that was one of the original architects (with Greenspan, Geitner and Rubin) of the deregulation policy from the Clinton era that got us to this point is not going to get a chance to put the cherry on top of the cake he baked. Maybe the man is smart enough to see what's coming and wants no part of what's to come? One sample reaction to his ouster,

""Larry Summers' past decisions to deregulate Wall Street and do the bidding of corporate America has made the lives of millions of Americans more acrimonious. He would have been an awful Fed Chair. President Obama should appoint someone to lead the Fed who has not accepted millions in payments from Wall Street, and who will prioritize an economy that works for the little guy above further enrichment for the big guy.""

Now, bears need to have no fear. Their day is coming. The day of reckoning for the trillions of liquidity infusion that have led to noting more than bloated bank balance sheets and a false recovery will come soon. The Fed can no longer support both the bond and stock markets. They have to choose one to combat and rates will win that battle hands down.

Bottom line is that taper OFF is all the markets have left. There is no other hope. The Dark Side's reign over the markets is coming to an end. Now, whether this is a planned event or not

Daily SPX - All the bears needed was one good pop to set yet another round of solid negative divergences and this morning's move will come close to achieving the mark. Pay attention the the S Sto below. In the past it has taken from about 10 to 20 days for the markets to turn after it tops out the first time. This does not mean it can't turn here, just saying that it is an early indicator that a storm of some sort is usually on the horizon. 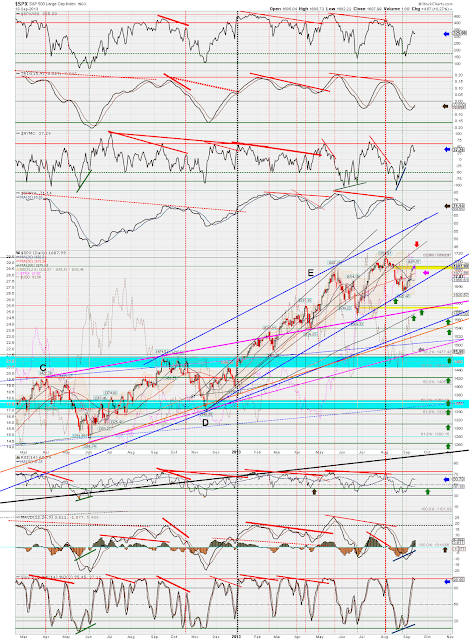 Minis 4hr - Just when things are looking so right for shorty they always find a way to pull the rug right out from under them. The 1687 resistance and May top with failing indicators looked like a great spot to entertain a short position, but one more time they find the necessary after burner boost to shoot price thru a tough resistance level. The potential STB point looms up at 1726 with the pink channel resistance and the beige diagonal backtest. This is the major resistance area that lies above. Of course 1705 prior high is in the way. 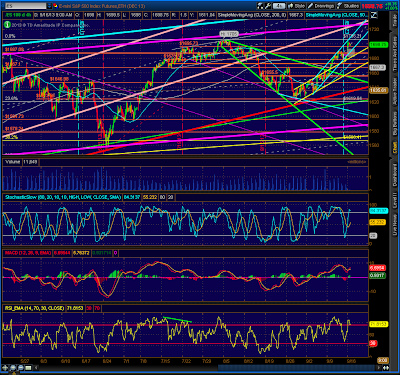 If I were long I would not be getting too excited. Owning a liquidity driven farce that is levitated by little more than hot air is not the safest place to have all your chips. That said, till they lose their control over the markets it is apparently going to remain the only game in town. I'm still on my top hunt, as this time I will not let the opportunity pass. They have to have a war and they can't keep this market afloat much longer.