Confused? Tired of all this crap? Well, don't feel like you are on an island. I promise you are not the only one struggling with the market/war/taper/debt/problems du jour. It's all part of the Fed's game, to keep you guessing. It's how they get free money/liquidity via hope taper will be off and everyone hangs around knowing the Fed will not leave their long equity positions hanging. We all know it, "can't happen here."

Mundane, redundant, insanity all work to describe our current global situation. You all know well my frustration with this whole mess. STB relinquished to the Fed over two years ago. I punted to the simple, "Follow the Fed" mantra as trying to rationalize anything became impossible. A realist that sees the world for what it really is can't battle unicorns shitting skittles, don't work.

The good news is we're nearing an end game scenario where even the Fed says they can't keep printing to keep the lies and every failed policy alive. Well, that's good news to some and really bad news to others. It all depends on your perspective. Some see it as an end and some a new beginning after the collapse of the global economic and political system.

Their path will be easy and relatively painless, but it will also lead to a slave type system where we all will work and live for the state. The other path will be thru the fire and be horrifically difficult, but it will lead to true freedom from suppression and government rule.

We're on the cusp if you can not tell. The elite are seriously moving forward with their plans to take completed control of the globe. Fortunately for us the Russians and Chinese are not (at least not yet) as set on global domination as the US government is. If potus can fire on Syria, the dynamics change dramatically and there will be no going back.

As for this week we obviously need to focus on 9/11 and congress being back in session with the votes on action in Syria being highly important. Oh and don't forget the budget battle, O care and immigration issues that are all about to be pushed front and center. The bargaining is just about to get hot and heavy. We're gonna find out who has ball and who wants what the most very soon in DC.

Minis 60m - We've been following the yellow channel up just above the red diagonal major support for close to two weeks now. Price is meeting near term green resistance. I'm not placing much weight on the green diagonal resistance, but it is there. 1666 may be a bit more meaningful technically as this formless (IMO) fall off the top searches for some sort of structure. If this is a falling megaphone, then something very soon is about to happen that will send this market screaming south. Anything sub 1627 or 32 and SHTF could become reality for the markets. Till then the hope of taper/war OFF will push markets up or at least keep them in a stable range. 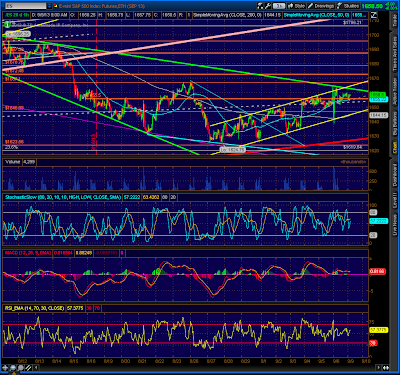 SPX Daily - 1665 is the 50dma and that is acting as resistance. The 20/50 dma bear cross last week was not a positive. Indicators are working north off positive divergences assisting the climb for now. 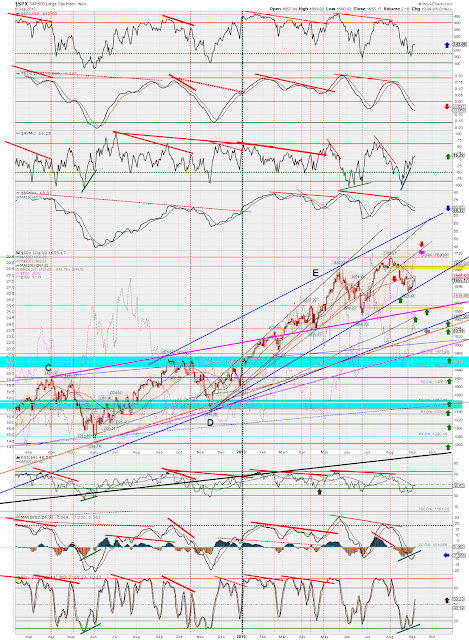 Greed rules and pigs will get slaughtered eventually. Remain patient and at the ready. Do not overstep of justify anything cause it must happen. An "event" is coming. You will see it plain as day. Remember the LEH incident and the consequent rally that followed. There is room for one last bull trap if they want it. On the flip side, this thing could have a 15 handle in seconds.