You know, it is what it is till it isn't. That's about as pronounced and provocative as I can get right now describing things in the market (and in the US as a whole for that matter). A heap of poo works quite well also. When the Fed chair throws out statements like he's "not literally" printing money, he's right. Money these days is created by manipulating 1's and 0's on a computer. This is a far cry from the "not monetizing debt" speak a few years back isn't it?

The saddest part of yesterday's speak to me was when the fed virtually admitted that if they tightened the economy "would tank". Well, that's comforting, but why don't you tell us something we don't know Mr. Chairman. And the market's reaction? Well it is a wonder the fear index is not negative now as the virtual promise the market will never tank has been delivered loud and clear. What a difference a few weeks make. From taper on/market crash to taper off/all is well, the Fed tested the waters and did not like the sharks nipping at their ankles.

All I can do at this point is refer to one of my earliest, and proving to be most poignant, calls from over four years ago, nothing happens till an exterior "event" takes control from "them". And to think so many unimaginable things have happened since then. I don't quite qualify as an old timer, but I've been around the block a few times. It is unfathomable to think about the level of control and manipulation being exerted over the markets right now. This market and time will be most interesting to read in the history books. Well, let me clarify that, depending on who gets to write the story.

Check the past two days of posts for a good technical description of where the markets are now. We're closing in on something.
That something resembles a major technical top. I assume a rather tidy battle is about to ensue between the Fed and reality as the dampened effects of a stumbling market far to drunk on QE meets a major technical ceiling. How long can the Fed continue down this path to the dismay of so many is the question of the day? As I've noted and as Ben now knows, they can either ease till it implodes or stop easing and let it implode. I think yesterday we got the answer to which path they have chosen.

SPX 60m - This chart provides a good look at two similar runs in time, shape and size for your comparison. The difference is one was in a larger channel that topped off a major run, and the other has moved to backtest the busted channel resistance. One ended from the threat to taper, and this one may end due to a technical condition (not it may never end if the Fed and CB's have their way). This chart is also a great example of the volatility I have been warning about for the past month or more that comes with and around impending market tops. 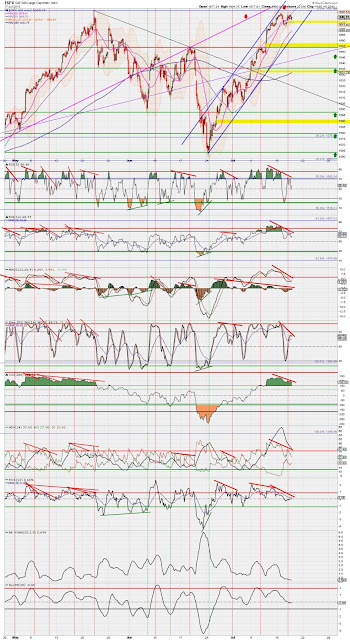 I really don't have much more to add. I've often discussed my disdain for calling much during earnings season, and the way this one has started it appears the lack of revenue and over hyped expectations (set the bar high so things sound great and you can lower it later for the easy beat) are making the equity markets salivate (although falsely) are standard yet again.

As usual, more to come below and maybe Friday I'll stretch the post out a bit to cover China, Japan, the EU and the rest of the crumbling global economic system. I'll get a fresh minis chart up and a tend call with targets up sometime around the open