OK - here is an all inclusive road map of how we got here off the top and where we stand technically right now. 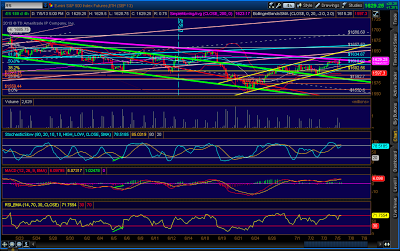 Up - Price backtested green chan resistance for several days (also at the 38% retracement) forming the yellow channel up before moving to upper pink market resistance line where it sits now, having missed the STB point at 1630 by a day (intersection of brown and pink).

Just above all of this is a brown rising diagonal. That is the long term bull channel support off the 11/12 low. My second major target sits at the 61% retracement and the backtest of the brown LT channel support at 1635. 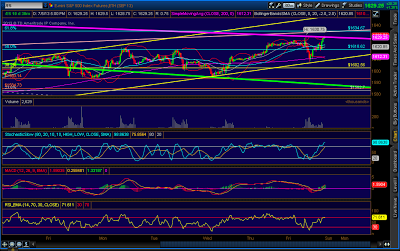 If they can get price above 1635 the bears may need to run for the hills one last time. If they crack 1631 then look for 1635. If that goes start looking to 1650. Anything above 1650 and a higher high should get set. I've been speaking of the impending volatility that is associated with major tops forming, and we're beginning to see a bunch of that. The bears are getting back in the game and the fools bulls are defending their turf. If the bears defend here (and earnings suck and there is more taper talk) then a 14 handle should be in the equation. 1467 area is possible and possibly the gap near 1430, but let's not go there quite yet.

A larger view - See that thick red diagonal near 1340 - that is the death line, and I'm starting to bring that into focus. You can see the gray rectangle that is the open gap around 1430. Another thing to notice is that sub 1530 there is no support to the 1467 area. Their fiat funded march to glory is filled with massive support less areas which will make the journey south like flying thru air pockets in a plane.

OK, my pipe dream set up - A massive HnS with neckline possibly at 1350 thus deriving an SPX 335 target. Uh hugh - get u sum of that! You can't hardly argue that it is not deserved, after all we're about to have a total implosion of the global banking system in conjunction with the global economy on the verge of collapse. That target may prove to be optimistic as I'm not sure the market will survive in its current form after the next collapse. 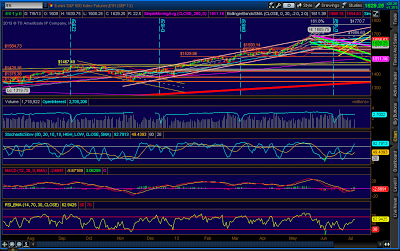 Current situation - The 1630 to 50 area will be critical for the bears to defend. We're thru the 4th and earnings season starts Monday. I think we have some really good formations to work with technically here. Once thru my 1595 floor I was hoping to get to 1541 to set a neckline for a possible right shoulder to form. Price only fell to 1553, but that was close enough.

The markets are really ready to puke up a lung here from several technical perspectives, and earnings season is set up to be yet another disaster. For over a year I had Q1 as the end game point, that failed, but in Q2 the top may have been set. There is one problem though, the Fed and the central planners remain in total control. Taper talk drives price along with the central planner's HFT algos and bots. We're dealing with a 100% rigged market here.

SPX Daily - Will resistance to QE4eva be futile? We're about to find out as the red resistance diagonal in conjunction with the explosion in TNX - something has o give here. the CP's backs are to the wall. They have managed to get most of the indicators here in up mode. We'll know soon enough if they are about to make thir last push to the ultimate top or if that top is set. All I have to say is that lower support of that falling megaphone (red) is a long way away and there is a potential STB point near 1500 where blue and red meet later this month just below the 200dma at 1514. 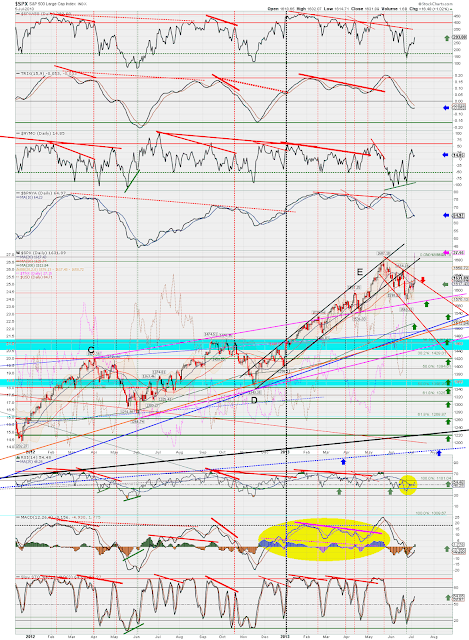 Back at the beginning of the blog in  2009 I stated that "this will not end till an external event our of "their" control" happens. We need that exogenous event, and when it happens, you better look out and be prepared. Till then, there is no telling where they can take this market.

Travel day for STB, so y'all hold down the fort.