Call it Bernanke day. One can only assume that unless there is a serious leak in information (like possibly yesterday), the markets should remain rather stable leading up to the testimony. Bottom line is - taper on/off. Nothing else matters.

As shown in the charts yesterday, other than the SPX (in a world of its own) all the major indexes are approaching multi-year long term resistance diagonals. These are not your garden variety resistance points. These are the real deal. Now, we all know that absolutely nothing is real anymore and historical norms can no longer be relied on any more.

Maybe, perhaps, this is TA's last stand against the manipulation and corruption that has dominated the market for the past four years. TA has a nasty way of showing up at just the right time, right when the shit is about to hit the fan and make the ultimate statement that price never lies. We're close to finding out if that is still true.

The bond markets always tell the truth long before equities wake up to reality, and they've been screaming for close to a year now (which is unprecedented). I don't think there is any doubt to the realism that the bond traders are far more intelligent and insightful than the greed driven stock jockeys. One group is in touch with reality and the other with champagne, the drug du jour and their ego. Who should you listen to?

This long term TNX chart compliments yesterday's selections quite well. What you see is a multi-year rising wedge that has a completed A-E formation, has broken down and now sits directly on its last support leg. There is no support (thanks Fed) from here to 119 and very few scattered below that. The bond boys were way ahead of the taper talk, and they knew something would eventually go down. 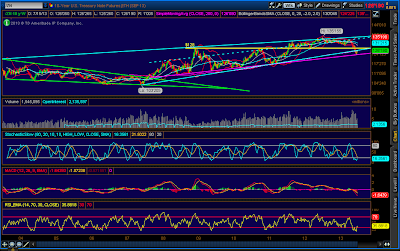 All systems are on go for an "event" of some sort.
Gold is ready to scream, oil may have blown out its last glory shot to upper resistance (unless Syria implodes of course) and is set for a possible reversal (or explosion - it is at a serious inflection point) and bonds and equities are ready for the bottom to drop out. Heck, event the NSA, DHS, DOJ and the police state are primed and ready at this point. So, can BB drop the bomb? Are the central banks positioned (cause you know they will be)?

Can BB let the markets go and capture one last stick save? As we've discussed for well over a year, I don't think so. This time will be different. Faith and belief in the system (every form of authority actually) is gone. This time mom and pop will not listen to their advisor's advice to ride it out. This time true capitulation will occur as literally everyone ill head for the gates at the same time.

As discussed volatility indication a pending top is occurring. The ball is bouncing as bulls and bears tug on each other. Sadly the bulls will not see their last trap. They never do. Greed rules till it doesn't. Get ready.

SPX Daily - You know I love the backtest and double tops and the SPXA50 at 400 and the NYMO topping and and the MACD histogram turning south (lower green box) before price and negative divergences galore. I focus on the minis cause I believe they tell a more accurate story. In cash's case, the SPX finally achieved the backtest of the busted LT channel support (upper green box). That point occurred at a near perfect double top with indicators not even thinking about supporting this move.

We've seen lots of near perfect topping formations trounced by the Fed, and we may yet see another go down. This time may be a bit different with the long term market resistance points shown yesterday coming into play. Again, TA has this wondrous ability. Has it perfectly times QE's end and their market rigging perfectly. We'll know soon enough. 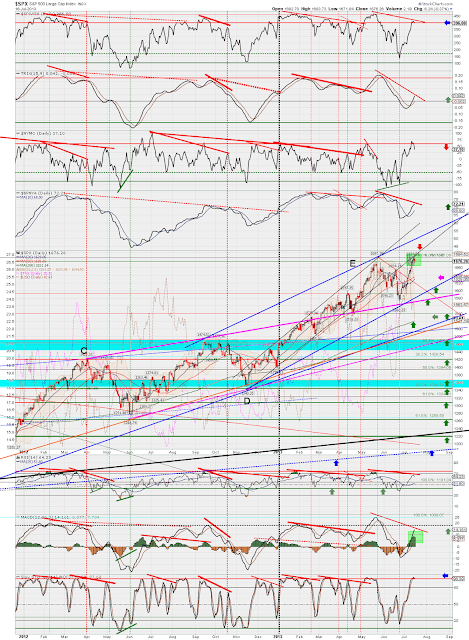 SPX Weekly - A look at the weekly chart shows the weakness in this farce as well. the indicators are showing strong negative divergences across the board. I'll share an STB top calling secret here. See that diagonal under MACD and the green box? The market will top in or near that point. At that point she will have given all she's got, so this is another indication the end is near. This diagonal can be placed under other indicators as well. As for the large pink triangle and the overthrow E point, see that lower pink dashed diagonal at the bottom of the chart? That is the triangle target. That is at least 750. I of course lean towards a 4 or a 3 handle and the end of the markets as we know them today.

As usual, more charts and analysis to come below. Sorry that got a bit long above. I think a top is coming very soon if it was not set yesterday. This could very easily have been the point. Of course that all depends on taper on/off. Nothing stops till QE does or some "event" forces their hand. Let's remain patient and hear what BB has to say.