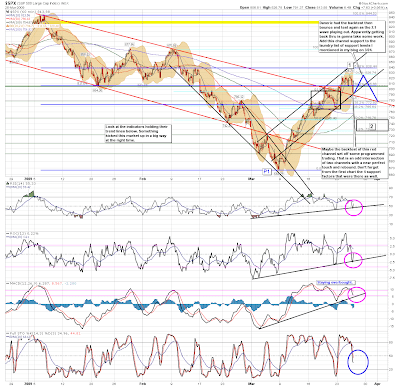 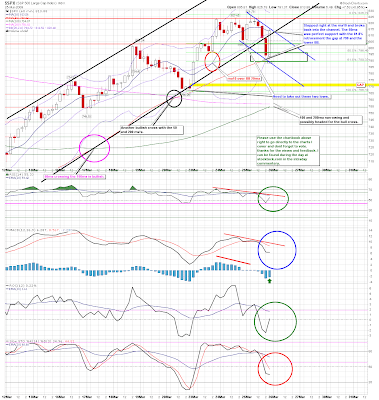 Ok, so I was feeling great. The wedge broke and we were falling as to plan, so at 3:45 I got up to take a "break". I came back from my "break" (which included a good read on Fibs in this issues of Stocks and Commod) around 4:05 and the market was up like 20 pts. WTF? I said. I said it again. Let's go to the chart to determine if this was a PPT induced event or was it just programmed trading set to kick off at a specific level.
First chart I note how Daneric had forcasted a potential back test of the red channel and then up for B and back doen for C for 2.1. He's spot on right now. The intersection of the falling channel and the red channel almost precisely stopped a roaring bear move in its tracks and flung it back up like a rag doll.
Second chart shows in detail how the market fell to a 61.8% retrace (actually a double fib retrace), at the bottom BB, at the 50ma and at the gap support near 790 (note it was also very near the target line I drew for the wedge in an earlier chart). Now look down at the indicators in the first chart and see how the turn appeared exactly at the trend lines drawn on the indicators. Clockwork baby, just like clockwork. I mentioned in a post last night that this run down had the potential to be very bumpy as it was filled with support factors. Welcome to Bumpy Road Down.
So, the reason for the turn was valid. Look at all the factors I've listed. Pretty impressive, but why the violent rejection? A bounce I get. That's easy. A bounce like that off of a major fall off an incredibly overbought market on a day with a horrible bond sale and China and the UK talking about a unified currency or some shit that is utterly ridiculous, now you are bringing the PPT into the equation.
No fund manager of hedge fund is going to be purchasing at the top like that without "knowledge" of something big or they are in protection mode (which would be suicide). Who buys at the top? Idiots. Are there enough idiots out there to move the market like that? Uh, NO. Someone was protecting something (some are barking about end of qtr statements that need to be juiced up so we get a run up). If you are not a believer or if you poo-poo the PPT you need to begin to take a second look. This market is manipulated. It is a rigged game.
Rant time -
I am a perma bear, but I know to play both ways. I have learned this lessong and do not live on a one way street, but this is BULL SHIT! The Rolling Stone article was great. Pauson and the Golman crew are playing a shell game with our money and Congress does not give a shit. Do you think they are gonna give back the "contributions" that came to them and the lobbyists via the TARP funds? Puhlease! Fucking Bull SHIT! Two faced fucking bastards that we put in office. And the SEC was on top of everything all along. Fucking A they were. Fucking Bull Shit.
Something bad is happening to our country now that may be irreversible. I'm not gonna bring my whole New World Order opinion into the blog just yet or the possibility of the anti-christ (666 bottom - dark skinned muslim) hanging around. Yes, I read and find that stuff interesting but stop just short of believing, but when the evidence keeps building it gets harder to ignore every day. (sorry for the minor rant, but they are fucking up our country and there is nothing we can do about it - I will have a large post on this one day).
Follow the charts and play the trends. If you can't beat 'em, join 'em.
Good fucking luck.
Posted by Shanky at 10:34 PM