SPX 60m What to look for 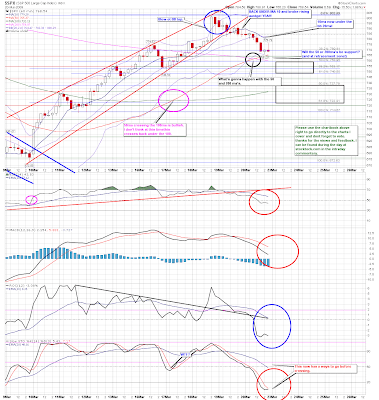 Well, it finally turned. I was beginning to think it never would. The double top at 803 and then the wedge breakdown condirming the divergences in the indicators made for a perfect short entry. Now will it continue? The other prevailing question is where are we in the count, 5.5 or 2 of P2 and where in that wave down?

What's working for the bears? MACD, RSI and ROC are all solidly heading south. MACD is still pretty high at 5.88. RSI is back under 50. The ma10 is under the BB 20ma and we're trading under the ma10. SPX still has not retraced 50% off of the 714 low. CPC is finally turning from the most bullish point in ages.

What's working for the bulls? Futures are up decent (at this time) Vix is approaching being overbought. SPX trading near bottom of BB's. The 50ma has crossed both the 100 and 200 ma's. All these ma's will provide additional support. My $$ G SPX 60m chart shows how SPX is usually held back by the interaction with the 200ma. This time it ran higher above the ma more than any other time in P1 except for WAVE 2. We might be in the 2.1 wave here of P2. Good support nearing the retracement area between 758 and 748.

What do I think? After digesting Dan and Kenny's fine work and a few others.looking at everything, and since we've had roughly a 5% pullback in the market and it may be time for a breather I'm looking at a consolidation period that confuses everyone (this is a less sophisticated way of saying what Kenny thinks). Possibly some form of triangle that coils to the next fall. Volume has been on and off and will likely reman that way. I'm going to speculate that the bulls put up a good fight, but the bears bring it back to at least the 741 range before the next serious move up. 712 is not out if the question yet. It appears that everyone has given up on sub 700. There will be a pop, but it won't be much of one though. 60m S Sto is bottoming out (and could embed) but the other indicators still have some room to fall, 30m looks ready to run but the daily is topped out and the weekly VIX MACD has a bull cross going. This cross might have the power to drive the market thru the serious support that the ma's and retracement areas will provide. Getting back under the 200ma will be a fight I'm betting. SPX may want to lift early in the week, but the fall will continue. Folks, everything sucks and the market knows it. Greed will take the market up higher than it deserves, just not till after earnings season has finished IMHO.