Shit or get. That's about all you can say about today. EU falling apart is a fantastic reason to come off the sidelines and pile into the equity markets. Hell, the minis fell to 1134 last night. What a great opportunity. Jobs are just fine as we still ONLY lose just shy of a HALF A MILLION a week and GDP under 2 should be praised. 21st Sequential Weekly Outflow Confirms Investors Refuse To Be Suckered Into Stock Market means all is well in the land of rainbows and unicorns.

Economic Calendar - GDP and Jobs better than expected! To bad the dollar is in the shitter. Initial Claims Come at 453K, While Prior Print Is Revised Higher, As 300K Claimants Fall Of Benefits

Earnings Schedule - Next week it gets cranked up. Repo 105 anyone?

Shanky's Dark Side - Where I call all the intraday action and provide even more charting.

SPX 60m - It is just way too obvious for them to let it fall. 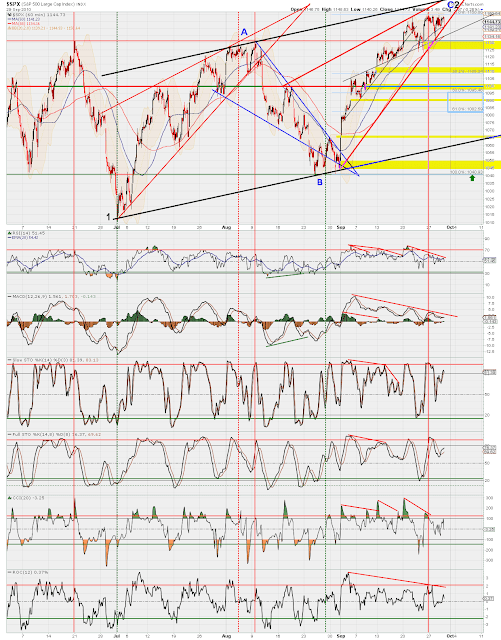 SPX - Dollar comparison. Wagging the tail. With the dollar headed where it is headed and gold going where it is going all you can do is shake your heads at the POMO supported EQ markets. 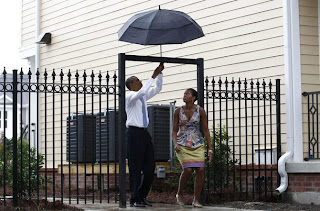 Got this in an email this morning - Your fearless leader(s?). I'm not sure if she would melt or not, but I'm positive Pelosi would.
Three options - 1) I'm still leaning to a zig-zag to the mid 70's after a slight corrective. 2) If not it may pop to the 58 to 64 range and then just collapse. 3) Puke up a lung here. EU falling apart but the dollar is weaker than the EUR. That makes a lot of sense doesn't it? Something smells fishy here. Bottom line is that says the whole world has no faith in the US or Ben has pushed the dollar deflation button and can't make it stop. Gold has hit my 1310 target. Financials are not participating in the rally. Quarter ends today. POMO today and only two left on the schedule next week on the 5th and 6th.

Form of the fall will be everything. What price does at the 200dma at 1117 and the 38 to 50% retracement area between 08 and 97 will be the key (if they let it get there). POMO runs next week and then they have none scheduled. They turn it over to earnings where I'm sure REPO 105 is in play for all the banks now, FASB rules have been trashed and the SEC will be doing whatever it is they do these days. When the top is in we will all know because there will be some serious impulse selling with everyone headed for the gates at once.

I'm still looking for my catalyst. Will the GMAC/JPM foreclosure issue lead to it? Ireland is crumbling (with the rest of the PIIGS soon to follow). They have been warning of immanent terrorist attacks (uh..hello..red flag event?). Something is going to hit that will cause them to lose control. What if it has hit? What if this devaluing of the dollar is telling the story? What if the world sees things just a clearly as we do here at Shanky's  Blog where we all know we're headed to hell in a hand basket and will be living in a socialist state in a short while? Either way, the writing is on the wall and it is only a matter of time before the USA has it's national day of austerity strikes like they had in the EU yesterday.

Market is to uncertain to make any calls today especially with Shalom speaking at 10:30. I'm assuming that since the GDP and jobs surprises did their jobs (with POMO in the wings) and he can now switch to speech B where all is well pump can further inflate the SPX/TNX ratio. We have the elections coming and they can't have any disruptions this month. the promise of QEII and NOW possibly TARP II. Bears, hang in there. the hangover form this levitation act is gonna be pure hell for the bulls.