Retail Sales beat estimates. Whatever. If you think job and credit conditions not to mention the closure of under performing retail stores across the nation matter at all, then the government's estimate is a crock. Did you know that sales for July were downwardly revised. No surprise there and it won't be when these are revised as well. Government mandates numbers to never disappoint. More detail on Retail Sales HERE.

Last night on Shanky's Dark Side I posted this minis chart. The blue line is the most recent market top line resistance coming off the top in April. This is a clear A-E wedge that has consolidated yet not shown any real retracement (again government mandated no retracements). This is a 4hr chart. MACD hist is about to bear cross, S Sto is there and RSI is falling. All the ingredients are there to bake the cake. 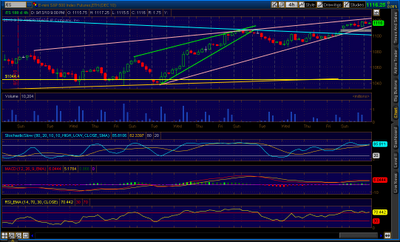 SPX 60m - Even the CNBS people mentioned how sick the internals looked this morning. That is definitely against government mandates (someone will get a spanking for that I'm sure). This 60m chart says it all right now.RSI14 crossing the 20ema and then that black support diagonal is the signal. 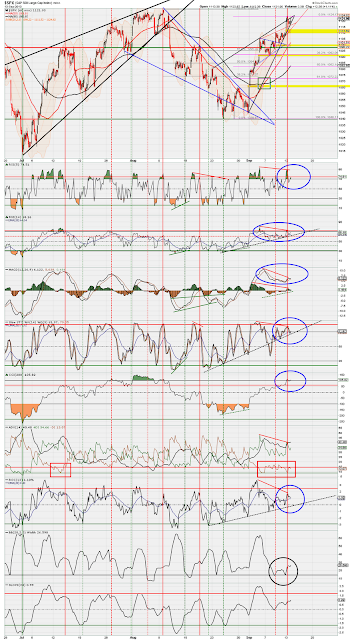 The 30m charts setting double and even triple divergences. The 5m chart with a long divergence and a blow off top. All the indicators on the daily in place but MACD. SPXA50 at 399 (400 is my magic number) and $NYMO are there. We're setting up a better top than I anticipated. Weeklys are not there yet for the big turn, but getting closer.

I'd been warning that there was a missing 5th wave. Now, finally form appears to be complete for this 5 wave move. Shortie should be safe for a few days I'd think. I'd be very surprised if that SPX top I called yesterday at 10:58 on Shanky's Dark Side gets busted. The ONLY snag is the daily MACD. I'll be a lot more confident when we finally get the daily MACD hist to put in a down bar and get the signal cross.As for the bigger picture, the weekly charts are still screaming although the weekly candles are pretty dismal. I'm still leaning to the ABC here with the form of this possible pullback being the key. Right now I'm looking at 92. If that gets busted or the retrace goes beyond 50% near 80 (the number I have liked for a long time now) in some sort of impulsive fashion then we could be looking at some sort of major move that takes us below 1000 (940 is the range I like).

So, are there any sellers, or should I say are there any sellers actually left out there. Will this manipulated market yield an inch before the elections? Is there enough complacency now where a turn can happen? We'll know soon enough. In a news driven market without an event then up is still very much a possibility, but the bulls are losing momo here. Opex week will weigh on the markets as well. I still think Thursday is the key day when we finally get back into heavy data.

GL and thanks for the views and support.
Posted by Shanky at 9:24 AM