Well, propping the markets into election season appears to be one theme we'll be getting used to. With Barry having to recruit people these days to come hear him speak, with other candidates running from him like he is some sort of virus and his tracking poll is hitting fresh lows at -24 his speech this morning might be more of a joke than anything. Look for him to use rhetoric to try and drive the wedge further between the haves and have nots. Divided we can not fight them. I best stop there in risk of being called a racist.

What did that have to do with the markets? I think the election has everything to do with the markets. They can not have anything else riling up the public and a further faltering market would simply add fuel to the fire at a time when they can least afford it. Yes, I'm talking about blatant market manipulation. Get used to it till we have the "event" that finally rips it from their control.

With 9/11 tomorrow I would like for you to read this post from Washington's Blog - The Anniversary of 9/11
SPX 60m - The only chart I offer today. I put a hard sell line on it yesterday when it set the divergence. The 30m confirms it. The dailys still have some room to run. This is not a major sell signal, just looking (still) for the 1080 area and then we digest from there. The 3 market possibilities are still 1) a top here and major fall 2) we're in a larger ABC pattern that takes us up to the 17 to 30 area after this pullback or 3) the markets simply remain range bound or consolidate (in the black wedge) into mid October.I prefer the ABC call at this time looking for somewhere near 25 as a possible target after the pullback to 80. 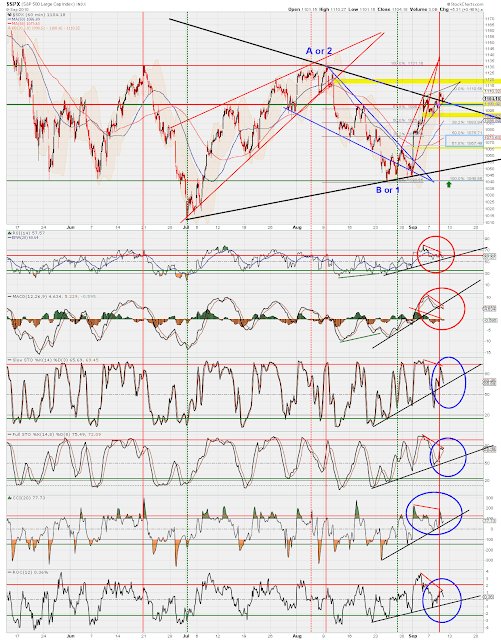 Again, without a catalyst and as long as we have POMO, the bots and zero regulation there is no reason to expect any real downside here. Apparently 450+ job losses is the norm now and that should be celebrated (along with the debt and GDP and your home soon to be worth 50% of what it was in '07). Aren't things just peachy!

GL out there. Please remember those that lost their lives and their families on 9/11. I urge you to read that post from WB above. Thanks for all your support and have a great weekend.
Posted by Shanky at 9:15 AM