It is all falling apart, but you'd never know that listening to CNBS or any other MSM outlet. Global tensions are growing and the U.S. sheeple are waking up (several years late of course). Several PIIGS have extended the dream about as far as it can go. The markets are ramping into the possible QEII Fed announcement tomorrow at 2:15. We all know that POMO operations are ongoing. I still contend that this market is all "they" have left between them and total anarchy and they will do their best to hold it up as long as possible (especially thru the elections). Sadly all the extend and pretend will do is make the pain on the backside that much worse. When the LEH type catalyst happens the destruction will be of historical proportions.

Economic Calendar - Housing starts in the morning and the the Fed at 2:15. Nothing else today other than POMO fund raising.

I still contend nothing happens till tomorrow. The bears look to have an itchy trigger finger this AM. They must show up in mass with reinforcements and with conviction to sell off this overbought range bound mess. Houston, we need and impulse. When you finally see that first huge move, you'll know what to do and the turn will be in.

SPX Daily - Overbought, but as we witnessed in April, it can remain this way for some time. Last Thursday I got the MACD hist decline I had been looking for. Some sort of turn soon should only be a formality now. 1130 resistance has been met. 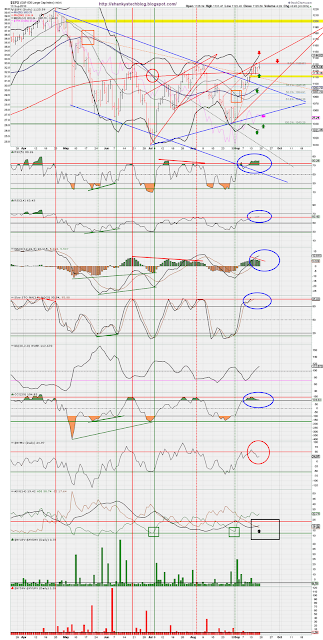 So, here we are again. I'm looking at something similar to the top in August. When it goes, it goes hard. 1116 is the 200ma, then the gap at 1110 and then the 50ma and 38% at 1093 are your major targets. Upside.... I guess I have to consider it .... OK, considered. ABC to the top of 2 or is this the last top? I have been calling for a pullback to to the 93 level and then a final push to the top. I began seriously questioning that call late last week as the possible triangle is in play and we're ending that formation. Again, form, form, form will be the key. The size and speed and length of the first fall should be enough to tell us if this is it or now. If it is, then it will be the beginning of a third wave which are brutal. 940 is my target.

GL out there this week and have you powder dry for tomorrow afternoon.
Posted by Shanky at 9:12 AM