FOMC is over, gold is at all time highs, dollar is falling like a rock and POMO continues. Kinda makes you wonder if anyone in DC has checked the National debt Clock lately? Goldman throws out the possibility of QE Douche being announced in late November just to keep the possibility of that happening out there which keeps the carrot in front of the bull's horse for another couple of months. That is a huge warning sign for the bears since the simple "possibility" of QE Douche ramped the SPX 100 points from the cliff at 1040 to here and might exist as a backstop for investors (those that are carbon based and left in the markets) to ignore lesser than perfect (to be revised) economic data. Gold tells the real story and as it continues its ramp to my 1310 target (yes, I think it will have one last pullback before the mega ramp), the money flowing there continues to tell you that everything else is a farce.

Economic Calendar - Petrol at 10:30. Tomorrow is a big day with jobs, home sales and leading indicators. Throw in Natgas for you UNG fans as well. Friday has durable goods and existing homes.

So are we topping? I'm still in my corrective to ramp camp and looking for some sort of near term top here. Same story as the past two weeks. I had pointed to the FOMC announcement as a key date and I believe a near term top was set yesterday. That is yet to be proven until someone at the BD's remembers to flip the stitch on HAL9000 to "normal" from "buy only". Greed rules and you are witnessing the greatest money grab that will ever occur in the universe. The BD's ball is rolling down hill gathering speed in an unregulated environment. This is something you have to come to grips with. Yes at the bottom of the hill is a large deep cavern that their ball will fall off and it all will end very badly at some point, but till then they are acting like a cornered wild animal fighting for the last scraps of wealth left on the planet. I've been calling for an "external" event of a LEH type magnitude to end it all for well over a year now and that is what it will take to rip control from the unregulated crooks running the system and bring everything crashing down to face reality.

SPX daily - Here is the wedge that the whole planet is pointing to at this point. Same story as the past week everything is in place for a turn except for ADX and the confirming MACD bear cross. I especially like the divergence in the $NYMO. A warning that these indicators mean little in a non-regulated environment with the promise of QE Douche hanging in front of the bulls in a market that sellers have apparently abandoned. 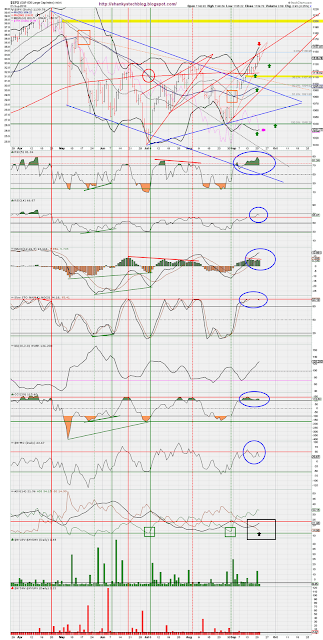 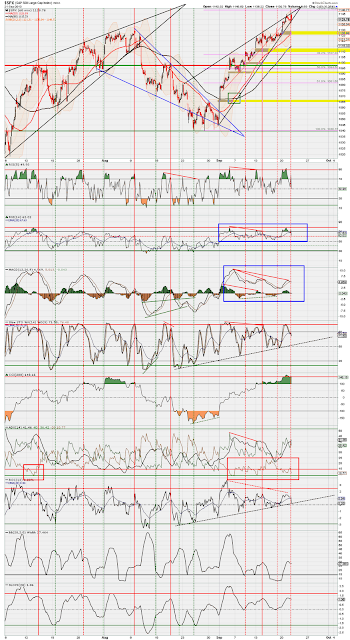 I hate to sound like a broken record, but till the sellers can show up in mass and prove they can make a stand nothing happens. Maybe now that the FOMC meeting is done it is time for a pullback. The weekly upper BB is at 1148.32 (the high yesterday was 48.08) and the January high resistance in in that neighborhood as well. Those should act as some sort of a cap on price I would think. Lots of support has been set (see green arrows on the daily chart above). As for upside continuation lets look at the A=C level near 1170. Today is another POMO day (Friday as well) and as long as they have the bullets they will use them.

Lets start with looking for a pullback to the 200dma at 1116 IF the sellers can gain any traction. The 38% retracement is at 07 and there is a gap at 10. If not, then don't be surprised to see the ramp continue. At this time I have that 70 number as a max.

GL out there and don't forget Shanky's Dark Side where do a lot more TA, and I call the action all thru the day.
Posted by Shanky at 9:18 AM