Will we get another ramp job Monday? With QE II hanging in the wind until after the next Fed meeting on 11/03 and EOQ prints I'd be surprised if the bears can pull it down much this week. May be we just churn as the bulls should have a tough case as well (esp after that ramp Friday). Some data tomorrow and then a big day Thursday with GDP and jobs may have trading subdued as well till those numbers come out. Two POMO days this week.

POMO Schedule - 28 and 30th this week. Must read - POMO And Market Intervention: A Primer

Global tensions are ramping again. The mid and far east seem to be the hotbeds now. While the reasons differ the one constant is that we're always in the middle. As we have been discussing sine the DB announcement to raise more capital, the EU banks are sliding down hill and out banking sector performance is reflecting that. The NAS dos not seem to care, but all indexes will note the underperformance of the financial sector. The hope of QE II, POMO, EOQ, market manipulation (throw in another short squeeze or three) and the elevation of price into the election season are the lifeblood of the indexes now. All that comes to an end sooner than later and then the great fall will begin. Bankrupt nations that steal from their middle class to support a bankrupt and corrupt financial system and continue to grow and fund a seemingly endless welfare state are destined to fail.

Price on SPX is now running into the January highs, that 1150 resistance is the next hurdle. The weekly upper BB is at that level and the daily indicators are continuing to churn into the overbought arena. AUD/JPY is in a big :T wedge that has price consolidating in a narrowing range now. Gold is nearing my 1310 target ending a massive wedge formation. TNX is getting punished. the VIX has a nice divergence to the SPX that usually signals some sort of notable top. All of that means nothing in the face of all the BS stimulus mentioned above.

Blogger is not letting me upload charts now. If you would like to see the charts that accompany Gold, AUD/JPY and the minis please go to my intraday blog Shanky's Dark Side where I posted a few last night.

SPX 60m (now that blogger is cooperating) - the wedge is real. It should lead to some sort of a top. I still can't buy this being "the" top just yet, but you can not rule that out. Form of the fall will define it and tell us what is going on. 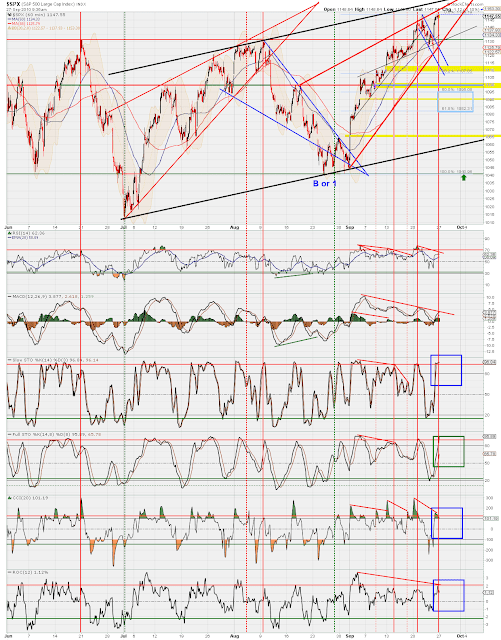 As for today's action, I expect a lot of nothing unless we get some news driven event. The bears may have the upper hand only because of the ramp Friday, generally overbought conditions and resistance as the markets wait on the big news Thursday with GDP and Jobs.As mentioned EOQ and the 11/03 FOMC announcement will keep us in limbo as well. Things in the EU and increasing global tensions will assist in keeping a lid on the markets. Right now I think we stay in a range of 1150 to 1130. Any upside surprise here would be just that and although I am not ruling that out in a POMO/rumor driven market is would be a surprise. I think we're in a basic wait and see mode now.