QE, no QE, currency intervention, monetization, HFT and other lovely market related actions all in an election season that is full of surprises so far. So much crap is going on right now it is hard to sort out the market movers. The FX market may be wagging the tail again for a few days, and then the lack of economic data honeymoon ends next week (actually tomorrow).

Economic Calendar - Empire Mfg disapointed this AM. "The degree of optimism about the six-month outlook continued to deteriorate, with the future general business conditions index hitting its lowest level since early 2009." 9:15 - Industrial Production and Petrol at 10:30. Tomorrow is a big day with PPI, jobs and Phily fed. Friday is big with CPI and Sentiment and Monday we get back into the meat of the data beginning with housing.


SPX 60m - Patience Grasshopper, and apparently patience will pay off as the indicators take cues from the divergences and break their support lines. That RSI 14 is the key IMO. Now, can this move take RSI14 thru 50? 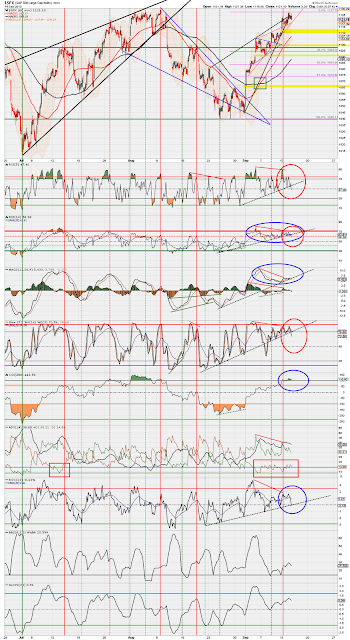 SPX Daily - Once again everything is at least minimally in place but the daily MACD. I want that hist to start falling and then we can finally talk about some sort of meaningful turn. 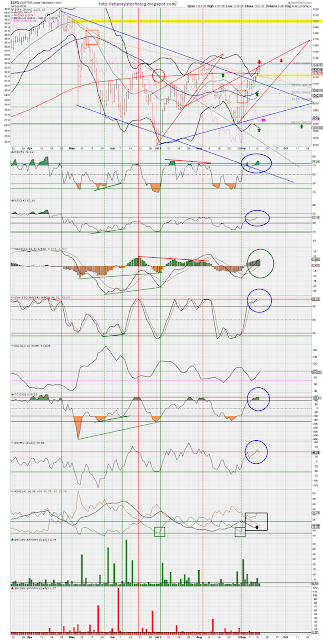 Just so you can see what happened with the Yen futures last night and if you were wondering what pure currency intervention looks like here you go. That is a 3% move which translates to an obscene amount of money and raises a massive red flag about Japans economic and financial future. 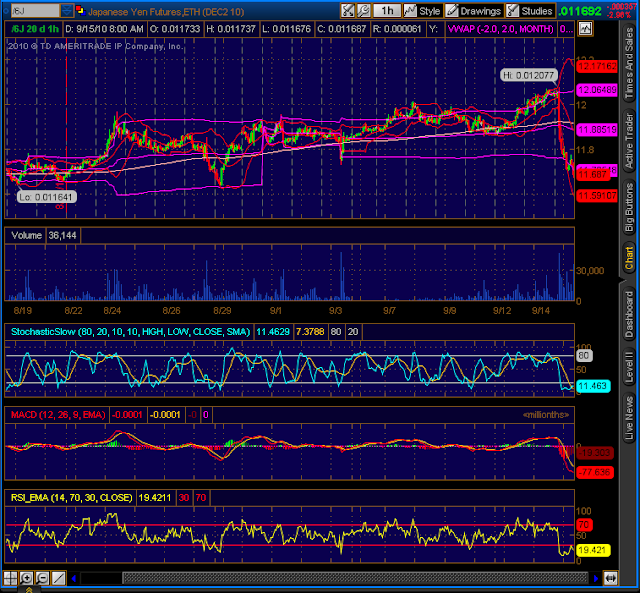 Bears will be happy with the open this AM, mind that gap. Sadly their push for the August highs is apparently going to come up a bit shy but they gave it a damn good run. Now, we have to pay attention to the form of the fall. will this just be a B wave or is this it and that was the last exit for longs for several years (no- not kidding). This month ends the quarter and you should suspect the mutual funds to want one last good statement, so that is something to keep in the back of your mind (and it fits with my possible ABC idea).

So, down we finally go. If it gets impulsive then you can expect the worse. I would expect with the right news or data 1040 gets gapped thru and next stop is the 10 or 00 level with the ultimate target for me being the 940 range. If it is not impulsive, then the bears will continue to be frustrated. For now I like 97, 92 then 80 as the primary targets. The daily 200ma is as 15 and the 50 is at 89. Those will be support as well. Watch the form it will be the key.

A couple of stories that I found interesting yesterday:

"America and Europe face the worst jobs crisis since the 1930s and risk "an explosion of social unrest" unless they tread carefully, the International Monetary Fund has warned. "

and this one pissed me off,

"The National Institute of Mental Health (NIMH), a division of the National Institutes of Health (NIH), spent $823,200 of economic stimulus funds in 2009 on a study by a UCLA research team to teach uncircumcised African men how to wash their genitals after having sex."
Posted by Shanky at 9:22 AM