Welcome to Q4. Not much to say this AM. Just kinda frustrated and agitated at the whole farce. I highly suggest you view Rep. Grayson's video on foreclosure fraud. This may be the catalyst that finally throws open the curtain hiding the man pulling the knobs. For those of you that continue to buy and have faith in the "data" provided from your socialist masters need to see this Charting Statistical Fraud At The BLS: 22 Out Of 23 Consecutive Upward Revisions In Initial Jobless Claims.

Earnings Schedule - It gets ramped up next week.

POMO Schedule - None today - Next are October 5th and 6th. Between now and the next FOMC meeting the biggest announcement will most likely be the release of the Fed's next POMO playbook on 10/13. That will be a key day to watch.


Shanky's Dark Side - Where I call the intraday action

SPX daily - Indicators are overbought and can turn at any moment, but as we all have witnessed in the face of POMO (only two left next week and then the new schedule is released on the 13th) and various other tactics the Fed uses Overbought means nothing. 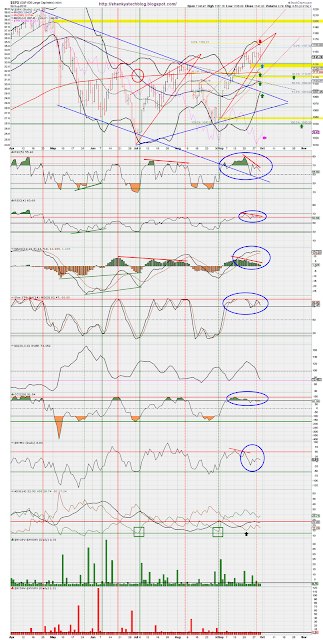 I have not called a top. Yes, we may be topping near term for a corrective or I will miss this one, but I think they extend it somehow despite the wedge and the 58 top. No, I have not partaken in the CNBS kool-aide but I am a firm believer that it will not fall without a catalyst and they will do anything they can to keep it afloat thru the elections.

I have a target box on my weekly chart that basically runs mid-Oct to mid-Dec and has SPX 940 at it's heart. the last time I laid out a target box I did it a week before the April top and basically called a one month 220 point fall and nailed it. Can it happen again? I have not posted that target box here yet, so it remains unofficial. Bottom line is if we get a catalyst it will collapse.

Not speculating on the markets today. No POMO and the bears have been doing fairly well limiting the bulls push. Economic data was fair at best this AM. Jobs and GDP are not getting ignored for the most part. I believe we're in a a wait and see more churn to continue mode in some sort of topping price action. Let's just be patient and let the market show its hand. It will. Yes the wedge may be topping here and the top at 57 may have been set, but I can't call it yet.

GL out there and have a great weekend.
Posted by Shanky at 9:39 AM