As bad as it all appears with Fraudclosuregate, nothing matters but POMO, QEII and good impressions going into the elections and now apparently the Christmas season. The farce continues to run, but its underlying structure gets weaker by the day. Not sure how long they can hold out, but as long as Ben has ink, he'll keep printing do or die. This single factor keeps investors on the edge. Just keep those trailing stops in place. You along with the rest of the world will know when to run for the gates. It should be very obvious when the turn hits I'd think.

Earnings Calendar - AAPL and IBM after the bell and BAC, KO, GS and JNJ before the open.


The dollar will remain a key market driver. It appears to be close to some sort of bottom where the Fed has stretched all it can out of its most recent plunge. Bottom line is dollar down market up. That is good for exports and bad for the consumer. Time for the balancing act to switch back to the consumer just in time for Christmas (who could not see that one coming). I do not prescribe to the "major" bounce most are calling for in the dollar. It will last thru the new year and that will be it, then the devaluation war ensues. What all the dollar bulls are assuming is that it is the strongest currency and that it still appears to be some sort of safe haven. They are wrong. The M2 figures combined with QEII and the fact that the price of gold is where it is all go to prove that the fiat currency will not explode but eventually crumble under the weight of the trillions already and to be printed. So, enjoy the coming pop. this will be it for the dollar (and may be it permanently).


This is the chart I used to call the 74 target low and the 89 target high. Monthly indicators don't lie and they are decidedly headed south. Dollar/SPX comparison chart. The inverse relationship can be busted, but as shown recently it should remain intact. If the dollar does begin to rise, the markets should fall, but will they with the promise of QEII and all the intervention and control they are under?

EUR/USD - Nearing upper resistance, completing 61% retracement off the last high and measuring to a near perfect C=A corrective adds to the dollars case for a pop and a potential market top. 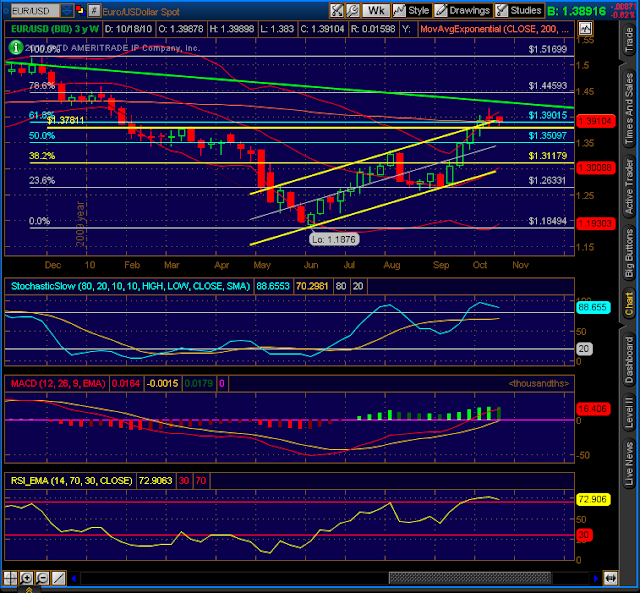 SPX, TNX, USB and VIX Daily - VIX may need to make it to support. TNX says SPX should be sub 800. 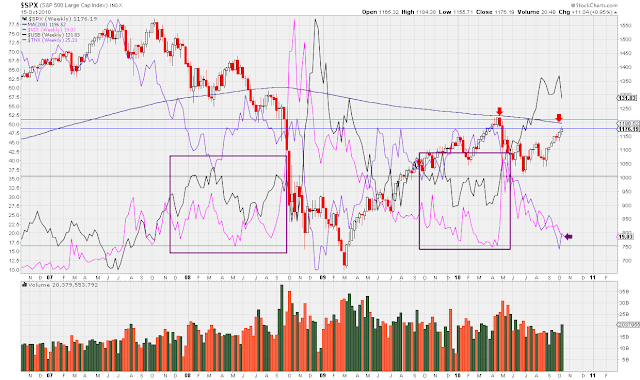 VIX, VXX and VXZ comparison - Pretty simple, near term fears are not that great, but go out and the fear grows.

SPX daily - If the cycle lines chart continues to forecast highs and lows then we're nearing a top here. I still like my descending triangle top call that has the April highs as safe (for now). 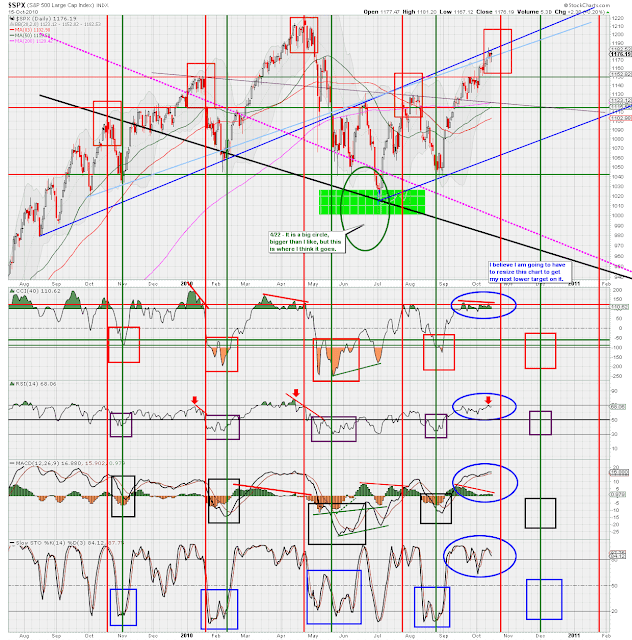 QEII, 3 POMO daays this week, the elections - same old story that I have been reaching since the 1040 lows. Markets don't give a flip about the robosigning scandal (except for the financials (as shown in the weekend post chart below). This will eventually catch up to the markets, but near term they could care less. If the markets gat one important miss in earnings you'll see a dramatic reaction, but if there are none, then the ramp will continue. the relationship to the dollar will be a wild card. If the dollar rises, will the markets fall?


I'm not making any calls till the morning with all AAPL, BAC and GS on deck. Should be an interesting week. I speculated last week, as part of an election play they may let the markets slip before the elections to try and drive voters for more conservative votes. The lack of emotions surrounding these elections demonstrated the complacency of the sheeple and is truly embarrassing. I believe it will be quite different 2 years from now.