Bottom line it there are only 8 days left till the QEII announcement. Screw the 61 days till Christmas, it is all about QEII baby, rampant monetization, proping up a failing fiat currency, propping up markets that are a farce and keeping what's left of RE values in tact. Really not much to discuss as whatever the Fed wants to do to either correlate to or counteract from global and domestic economic stress it will do legal or not.

Earnings Calendar - For my local fans SNV reports after the bell today and AFL tomorrow after the bell.  Earnings info here at MarketWatch Earnings Summary HERE.

POMO Schedule - NO POMO today but we do have one tomorrow and Thursday. There are only 5 POMOs left and the next schedule will be released on the 10th.


/ES - SPX futures 4hr - What else can you say other than rectangle and ramp. The large corrective last week was nice, but proves to have been another head fake in a market that refuses to correct. Running of the fumes of the promise of QEII and the reflation trade despite all the negative factors that exist the markets simply refuse to fall. Well, we all know why they refuse to fall as the POMO trade and SECless (unregulated) markets damn the torpedoes and continue to crate the illusion that all is well.I think there is a very good possibility that we're forming a HEAD right now of a possible HnS pattern that will allow the markets to roll over. The pink diagonal is the neckline. 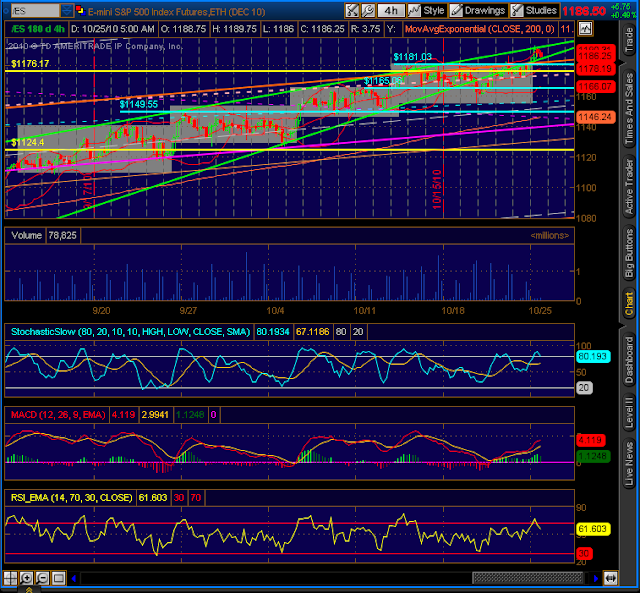 SPX 60m - The wedge and divergences. What it all means in a fully rigged market who knows. What it means from a TA perspective is that the market should be at some sort of NT overbought top that is in dire need of a larger sell off. 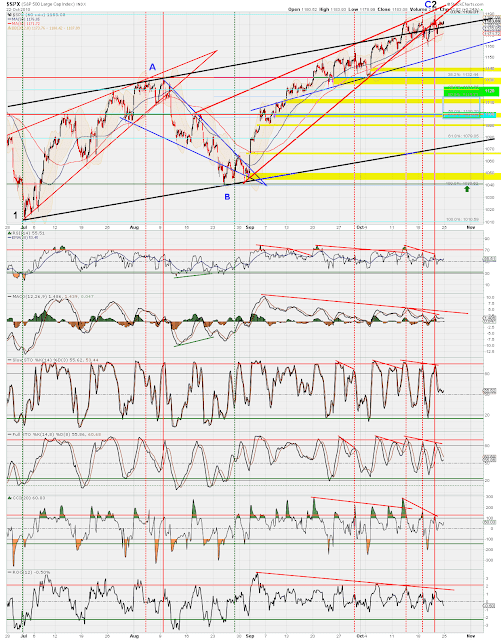 Earnings continue to roll in handily beating either lowered revised estimates, FASB lessened contrived numbers or pathetic comprables that a monkey could beat. POMO continues for 5 more days and the next schedule is released on the 10th. The election and the QEII announcement are less than a week away. The G20 is over and no one understands anything that came out of those meetings. Fraudclosuregate is getting swept under the rug as it is clear that the consumer was fucked by the big banks and no one seems to give a shit.


The big question remains are we in P2 or P3. If P3 scenario then this move is ending C of 2 and the fall from here should be dramatic. If P2 then we're most likely ending a 3rd of the final wave 5 move to the top. Either way the market crashes eventually. The reflation trade can only go on for so long and the third and final bubble will burst. What will the markets do this week? If the ramp and sideways action is to be continued then that is simply it. Rinse/repeat. The wedge has either busted or is resetting it's lower D touch yet again


Given the rampant corruption and riggedness of the markets I don't think they can fall going into the elections. All we can do at this time is wait and see what happens on Tuesday next week. 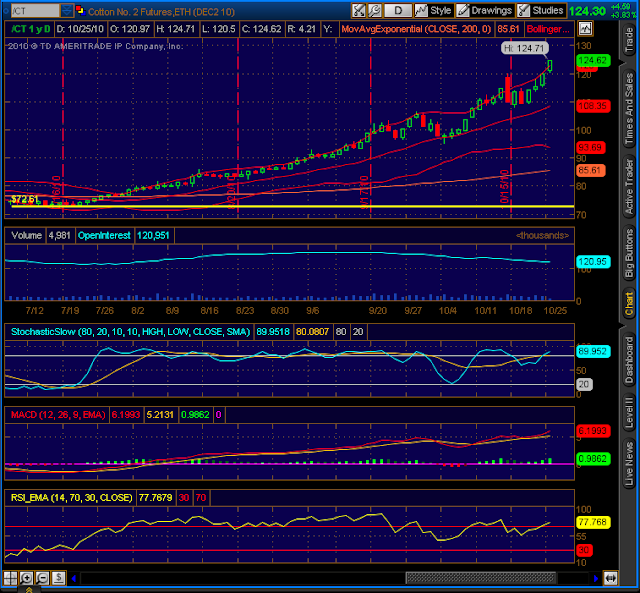 Looking at the dollar - No one seems to want to admit or discuss that mini flash crash to $74.60 late Friday. It appears to be channeling down and has busted the most recent trend down and has a chance of some sort of corrective here. It is struggling to rise as most expected. Currency wars continue and as long as we're printing the fiat currency, then I am not sure how it is supposed to ever rise again. 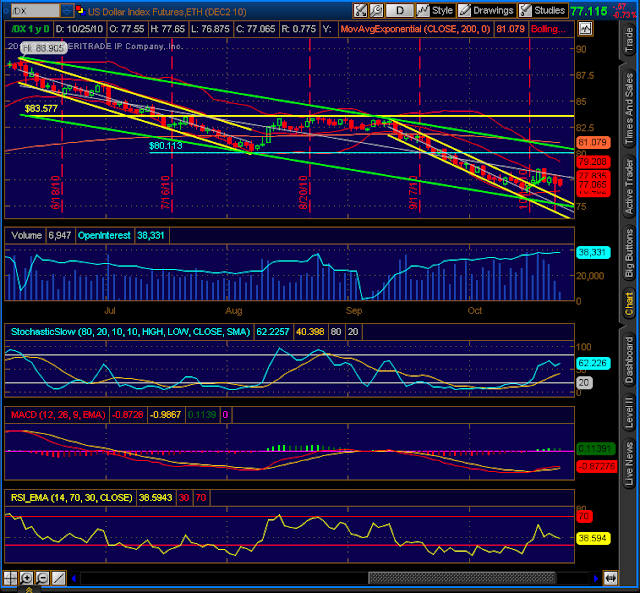 GL out there and have a great week!
Posted by Shanky at 9:15 AM