Top. there- I said it. More on this below.

Yesterday in my closing comment before the bell on Shankys Dark Side I said, "The wedge has been reduced to a mere 15 point sliver. It is clearly consolidating and obeying the parameters. The overthrow this time (if the top is not set now) should be it and will most likely garner a top call of some sort from me in spite of QEII, elections and POMO. Most likely I said, I still got a few hours to think about it. These divergences and that daily MACD may be to much to ignore."

GS has revenues plunge? So what's new? Everyone for umpteen consecutive quarters has missed on revenue and now it is a big deal? AAPL's guidance was not so hot and others continue to beat lowered estimates. I have a question. Where the hell was I (and the media) when all these estimates were lowered or revised? I must have missed all of that somehow. The two must see posts from last night are 1) SPY Flash Crashes: NYSE Cancels $500 Million Worth Of Trades and 2) Visualizing A POMO Market: How The Fed Added 400 Points To The S&P

Earnings Calendar - YHOO after the bell (remember when their numbers meant something?) MS, WFC and BLK (with ABT, MO, BA) before the bell in the morning and NFLX after the close. MarketWatch Earnings Summary HERE.

POMO Schedule - No POMO today, but we do have it Wed and Fri.

SPX 60m - Can't say any more than the wedge is ending and the numerous blown thru divergences scream how overbought this market is. 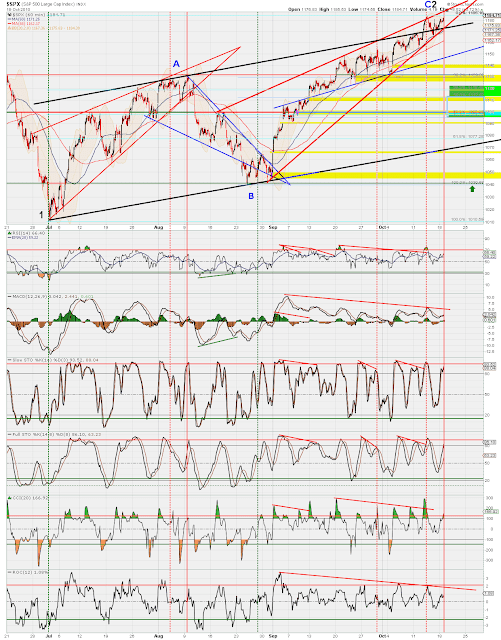 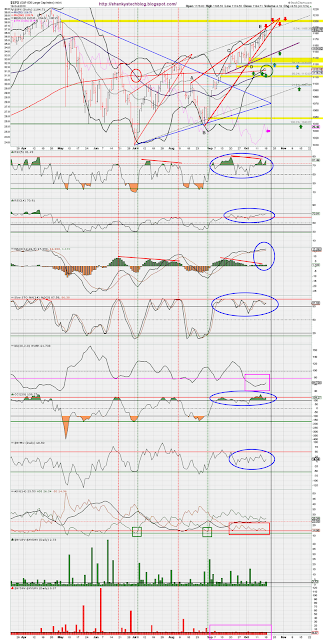 Top? Let's call it at yesterdays highs. Makes for a nice double top with divergences and the wedge ending. I said I'd call it so (partly out of frustration against POMO, QEII and all) I'm trowing in the towel. I waited and waited watching the cumulative effects of the promise of QEII (+POMO) and had to see what happened with AAPL and GS. Could not make the call before those reports and it turned out to be the right call (so far).

NOW, WHICH TOP is the big question. Is this THE top of 2 of 1 of P3 or is this simply the top of a 3rd of C of P2? that is the huge question and one I can not answer. With the rampant manipulation and QEII there may be one last ramp left in the Fed that I am calculating (if it happens) tops in early February.

It will all be about the form of the fall. We'll know if 1) we get big volume down, 2) the retracement levels of the move off 1040 lows and 3) What happens at the point where C=A (similar to where we are now but the inverse) and does it turn into a 3rd or reverses. I speculated the markets would let go before the elections as some sort of ploy to further weaken the administration's effect on the elections (not sure why given the current admin could not screw up any more or look any worse than they do). Then do we get a rally to the EOY after QEII announcement?

I'm running out of time to discuss the rest of this in detail, but the global tensions of the currency crisis are boiling over. FX Wars Escalate: Brazil Cancels Participation In Upcoming G20 Meeting is a good place to start. Reading China Raises Benchmark Rate By 25 bps is another. The dollar and interest rates will become even larger market drivers (like they are not already) than they are now. Keep an eye on UUP and TBT.

GL out there. More on The Dark Side all day long if you are interested.
Posted by Shanky at 9:17 AM