POMO DAY!!! Nuff said right there. Yes, we're in deep shit cause throwing trillions more at the problem and currency manipulation seem to be their last ditch best efforts to solve this crisis. No one has the balls to step up to the plate and take their medicine. I have a feeling their hand will be forced sooner than later.

Economic Calendar - Non mfg ISM at 10. ADP tomorrow is the biggie and then Thursday ( with no POMO) the action begins.

Earnings Calendar - YUM after the bell and MON in the morning. Also PEP and AA are the big names this week as things get kicked off. Let the farce begin!

POMO Schedule - Tuesday and Wednesday end QE Lite. "The next release of the approximate purchase amount and tentative outright Treasury operation schedule will be at 2 p.m. on October 13, 2010. "


Two days of POMO and earnings season is kicking off. Data on Wednesday and Thursday will have potential to move the markets. 10/13 the Fed announces the next POMO schedule, which may be hard to do before the next FOMC meeting on the 1st and 2nd. 11/03 will be a big day as well with the FOMC notes and the election. Currency wars are the in thing now if you are into the financial thing. Sounds geeky (and I personally would never go with it), but it it a terribly powerful thing that desperate nations play when they are facing sure fire insolvency issues and have no plans for their debt crisis other than pulling demand forward. Let me see, what happens when you print trillions upon trillions and eventually become your own largest holder of your own debt? Folks, that is some scary shit right there and what your government has allowed the Fed to do. It would be called End Game where I come from.


SPX Weekly - (best viewed HERE) OK, this sucker is looking ripe especially when you combine it with the daily chart. BUT, but, but POMO and the promise of QE II can be a buzz kill if you are a bear. Is QE II priced in? Is a overhaul in DC priced in? (I encourage you to vote and to vote for all non-incumbents - makes it easy). TARP II? Currency devaluation? Bottom line is this sucker is struggling and that upper BB is proving to be a tough nut to crack. The ramp today is not like it was in April. The bulls have a tougher road to hoe as economic conditions are toughening as more truth about the struggling global economy comes out every day. A month ago when we were battling 1040 I put that pink box on the chart as a potential target. then Shalom spoke and with his breath (and the promise of QE II raised the markets from the dead - and sunk the dollar). I left it there, cause it is still a possibility. That is how quickly this puppy will fall when it goes I believe.

SPX Daily - indicators all red AT THIS TIME. With the futures up 9 at this time and two POMO days and some October earnings witchcraft you never know what they can do to price these days. 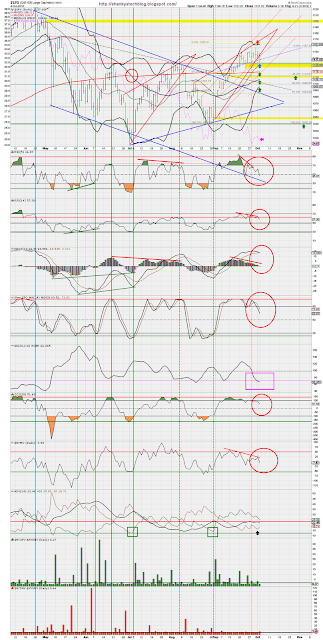 Sorry (again) that I can not commit to one side or the other. The charts look better every day for the bears. I waited patiently on the daily MACD to come home and the indicators are all red on that chart now. In "normal" conditions I'd be balls deep short at this time, but with all the conditions I have been harping on for a month now, you can not commit to either side at this time. The bulls struggled with 1130 and are now with 1150. The bears have finally shown up to stop the run and are fighting back. The range is 58 to 30 at this time. My target up is near 75 and first target below 30 is the 200dma at 18. the only plays I am making now are scalps on the 1 and 5m MACD crosses. POMO ends Wednesday and the data on Thursday could be a big market mover. Let's be patient and see what transpires there.


GL and have a great day!