The bombshell that Foreclosuregate is can not be denied. Zero Hedge has two must read posts in Bill Black On Foreclosuregate: Calls For The Immediate Termination Of Bernanke, Geithner And Holder and SIGTARP Calls Out Tim Geithner On Various Violations Including Data Manipulation, Lack Of Transparency, "Cruel" Cynicism, And Gross Incompetence. Denninger has Bair: Foreclosuregate Is A ****show and many more. Must read stuff that will make your toes curl. My "catalyst" or LEH type incident is here. Now it is only a matter of time before the lit fuse makes it to the powder keg.

POMO Schedule - POMO today! There are only 4 POMOs left and the next schedule will be released on the 10th.

Minis down 4. While some of the earnings news  is good the broader news is horrific. Still waiting on QEII and the elections as POMO and the HFT bots keep the overbought markets afloat. Commodities and currency are playing a huge role in the markets now. Note the ongoing dollar/SPX correlation is on big time. If you are questioning that the dollar bottomed and SPX is still rising, that is a function called bullshit keeping the markets afloat.

The financials are still lagging, yet the markets continue to climb. this is another sign of the bullshit I referenced above.

My favorite chart compares the VIX (busted), TNX, SPX and USB (30yr bond). Note forst the SPX is trading just below the weekly 200ma at 1194.22. This is a huge hurdle. SPX should be trading with TNX and if things correct accordingly we should see SPX trading near 800 before to long. Some are pointing to the SPX and VIX both being in HnS formations. If you visit a site like that. STOP and never go there again. 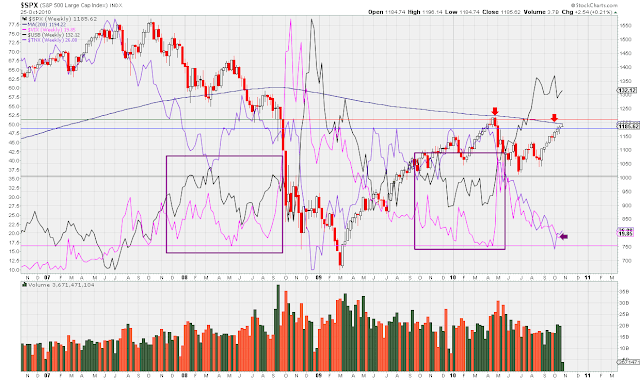 Comparing a few major global indexes here you can see the recent dramatic rise in the Shanghai index and the lagging NIKEI. With the dramatic outflows we have seen for the last 24 consecutive weeks from mutual funds that money has to go somewhere and China is apparently one place the funds have gone (and other emerging markets).

A quick look at oil - range bound really since June of '09 and has been in a relatively narrow channel since then. Historically oil has gone opposite the dollar. In this case it is not rising and that sounds a warning to me that the demand (and thus the economy) is not there. If the blue wedge is right price has consolidated out the end. Place that in conjunction with the indicators and oil might be due for a fall. I'm not betting on this, but more weakness should be expected near term. 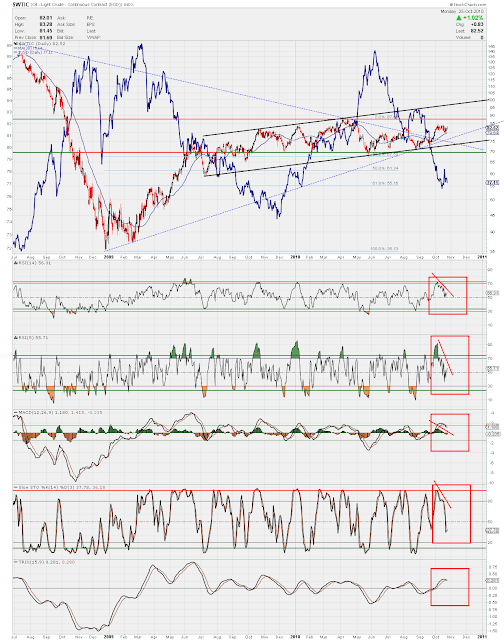 SPX 60m - I am bothered by the fact that 1200 is still in the SPX neighborhood. QEII, POMO and the elections are there as well. Downward pressure is clearly rearing its head in spite of all the "promise" that QEII has to offer. Priced in? You have to ask how much? the wedge scenario now has two lower diagonals. The first one busted and the new lower one is still intact. the divergences are there.The daily MACD bear cross is there. the weekly 200ma is there. I am thinking SPX is forming a head and shoulders here (neckline not shown in this chart - sorry). It is worth about 40 points and may taget the gaggle of daily support near 1130 SPX. 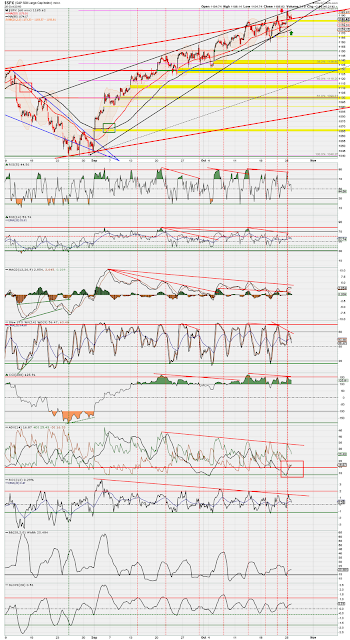 The minis are currently 17 points off their highs yesterday morning The form this time is quite different than in the recent falls. More controlled and not as violent. I don;t think the markets let go before the election or the QEII announcement without some more really bad news. This may be a sell the news set up. the markets are very overbought near term. As for form, the big question remains is this a 3rd and we're still in P2 or are we ending 2 and the crash begins sooner than later. Form of the fall will tell us that. Can the bears bring it to the hoop with power or not? We'll know early next week. Today and Thursday are POMO days so don't get to excited about any downside action.