Everyday we get one step closer to the long deserved implosion. Global and domestic tensions are growing, and I believe the Fed and this administration have lost all control of the situation. Well, control of reality that is, not this fantasy world of fiat that they try and push on us. They have that ship running just fine.

The lies are getting thicker. When the election is over things will change drastically. That may be when some of the thicker problems begin to rear their ugly heads above the mist of distraction the administration has laid to cover their tracks. Fraudclosure crisis, employment, debt and monetization are just a few off the major issues that face the domestic and global financial system. Considering just those four issues is daunting enough. Throw in the myriad of other problems and the mole hill becomes a mountain.

We're in deep trouble and don't believe it when anyone tells you things are getting better. They may be stabilizing only because if they do get any worse off the cliff we go. Odds of running the car off the cliff .....95% I'd say. You only need one fact to grasp the reality of the situation. That single fact is that very soon we'll be the largest holder of our own debt. We're already number two. In other words, we're (the Fed) the only ones that believe we can reinflate the credit bubble and all will be well. This is not reality.

Shanky's fantasy thought of the day - Could there be a chance that Fraudclosuregate will not be that big a deal to the banks. Why do I speculate something that audacious and as criminal an act will be yet another form of robbery by the banks to get swept under the rug? I speculate it will end up in the Supreme Court where the controlled justices will rule in favor of the banks and in the interest of national security. Upon that ruling, all hell breaks loose.


30yr treasury - Possible HnS about to breakdown. Measures nicely to the 61% retracement. 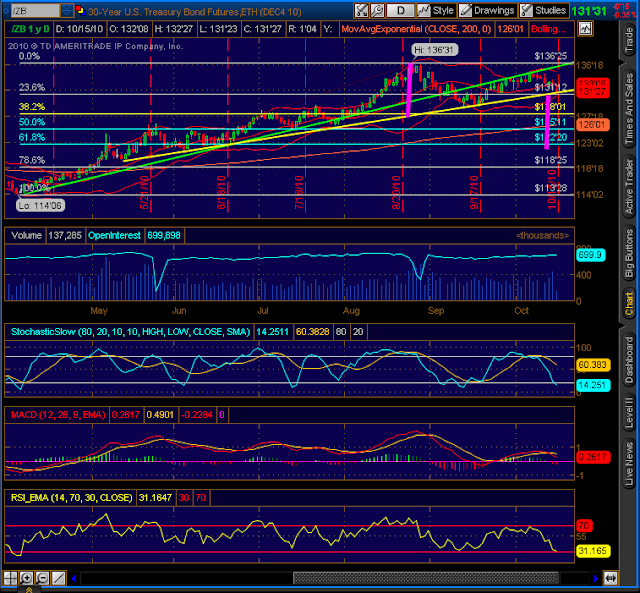 SPX 60m - It does not look like it can go any higher, but with 4 of the next six days being POMO days you never know. 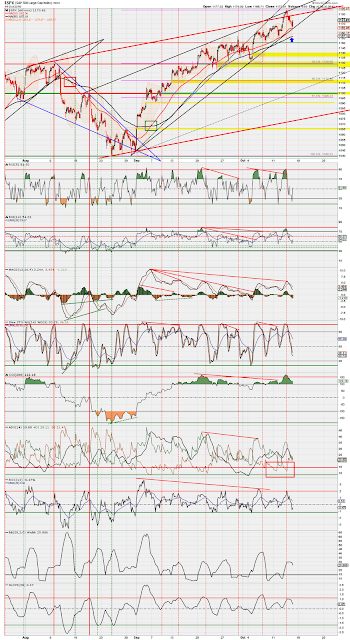 SPX weekly descending triangle theory - I'm still thinking this could be our form. 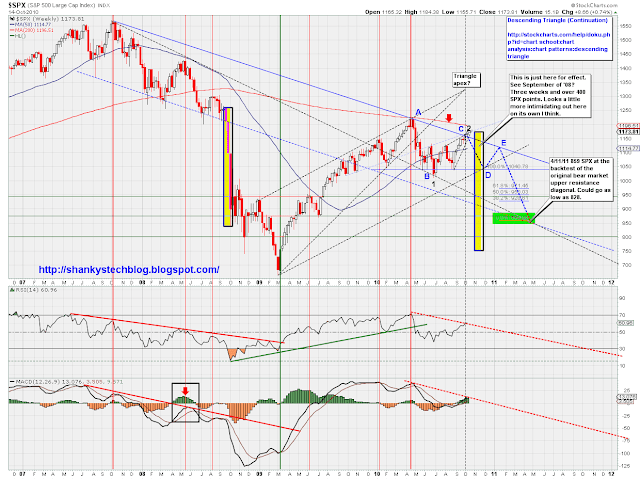 Minis came within a point of their highs. We may possibly be seeing a double top here. I highly doubt that as the bears have to show up in mass and bring 1,000 truckloads of volume with them. 4 of the next 6 trading  days are POMO days. That is scary if you are a bear. Golden cross yesterday vs. the daily MACD overbought and trying to bear cross - that is a conundrum. QEII, POMO and the elections, same thing I have been preaching since the turn at 1040. Sounds nuts, but it has been the precise call. Waiting on THE catalyst to put the final nail in their coffin. Flash crash II is coming (and so will III, IV, V and so on).

GL out there and have a great weekend.
Posted by Shanky at 9:13 AM