Let the games begin as earnings season gets ramped up. INTC should beat revised numbers easily after hours and then JPM with a little help from REPO 105 (and numerous other crutches) should meet or beat in the morning. This is not the time to think the accounting standards are going to change to make things tougher. Hell, we all know the SEC is a worthless pile of dung (unless you are some small time player that has no pull, then you get skewered and roticreized). Regulation? Ha! I laugh at you! This country is in no shape to regulate anything right now. Why the heck do you think the markets are so correlated? The markets will fall sooner than later, and it will not be pretty when they do.

Economic Calendar - Hoenig goes at 11:45 which could be interesting. 2:00 are the FOMC minutes which may release the new POMO schedule.

You have no idea how hard it is for me not to be calling for a turn here technically. Looking at the markets and trying to determine where we are is more challenging than ever. One might ask why because they are rigged and will only go up. How hard is that, right? TA (when operating in a non-rigged environment) has a funny way of working even when you think all hope is lost. A wedge is a wedge and when indicators get overbought and price begins to consolidate, someone is gonna start taking profits sooner than later. The problem with that is the fact that the BD's are simply passing the hot potato and are under mandate not to sell anything and to only bid the markets up. As the markets eagerly await QE  II and more POMO injections the smart money is betting on the team playing with the rigged boot that dispenses an ace every time it needs one.

SPX Daily - All those green arrows are support. The pink arrow is TNX which sits near 1010 SPX. This disconnect should be resolved eventually. Overbought? You tell me. 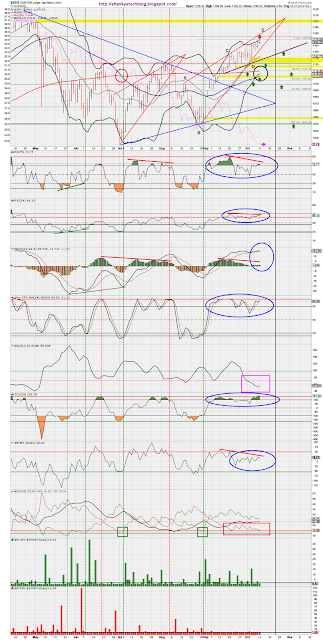 SPX 60m - No words necessary to describe this chart. Targets are the two green boxes. They may not be good ones though, cause after SPX takes out that gap at 25 there is not much to stop it till 1040. 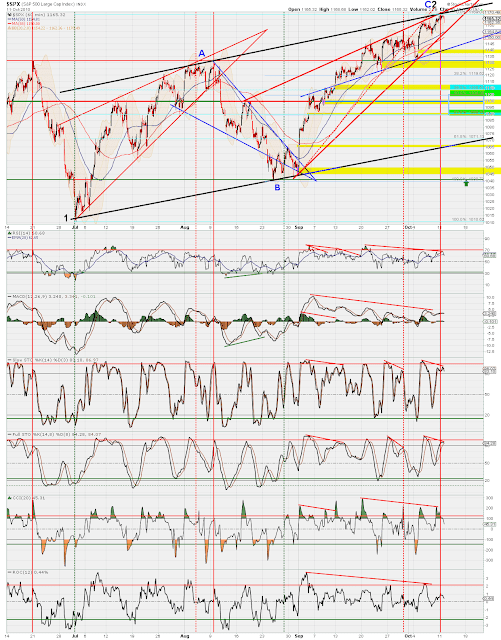 Gold - I suggest you look at THIS chart and THIS chart. The HnS (formed '08 thru early '09) target has been met.

Dollar compared to SPX, Oil, Gold and TNX - Slightly screwed up if you ask me. I think the dollar corrects to the 40ma near 80 and that's it. IMHO anyone that has the dollar finishing a corrective here and think it is about to explode (All the EWT people) are on crack.

Under normal conditions I would say fall. Under normal conditions I would say we're about to crash. I can't go there. If it does and I am wrong, so be it. Just like in April when everyone was calling tops and the EWT counters were dropping like flies, still I'm holding course. Yes, it is going to come down one day. It may even fall faster than gravity allows. Till we get the catalyst and the BD's to start the cannibalization process the markets will remain under the control of the Fed.

Yes, the top may have been set yesterday. Lets see if it can begin a controlled descent here to the 40/45 area to that blue line on the 60m chart and form a HEAD and then put in a RS with a lower high (as a failed backtest of the wedge) and then let go (this would work even better if I could get one last spike to my upper range near 75). I have preached form of the fall as a key and to look for impulsive selling. Be patient and let the trade come to you. There will be plenty of entry points for many years when this all collapses. Pigs get slaughtered.

The POMO schedule is due to be released tomorrow, but it may come today. Look out for that. Should be like pigs lining up at the trough when that is released.