Its really all about QEII or not to QEII. That is the question. That is all that matters. Do we trow trillions more at the problem and go deeper in debt extending and pretending waiting on some magical recovery, or do we simply take our medicine and deflate the credit bubble now? Either way, it busts. The sooner the better. The "economists" did not see the tech or RE or credit bubble. Now when the Fed is about to become the US's largest holder of treasuries, we're about to throw another trillion at the problem, there is a slight jobs issue that the markets seem to ignore like it is no big deal and they can't see this ultimate threat either? And the definition of insanity is?

Economic Calendar - Wholesale trade at 10 and that's it.

POMO Schedule - No Mo POMO That does not mean they are gonna send the PPT packing. "The next release of the approximate purchase amount and tentative outright Treasury operation schedule will be at 2 p.m. on October 13, 2010. "


SPX Daily - This chart should be topping. It should have an undeniable divergence that any normal market would respect. Everything points to a top here (especially without POMO around now). Upside potential? Well I have been looking to the possibility of 1175. The bulls get a mega pop and then markets churn for a week till the next mega pop (usually on bad data which further strengthens the possibility of QE II). The bulls next big hope happens on 10/13 when the next POMO schedule is released. Downside potential? Well that is limitless, but near term 30 and the 200dma are about all we should expect till the election/FOMC QE II announcement on 11/03. 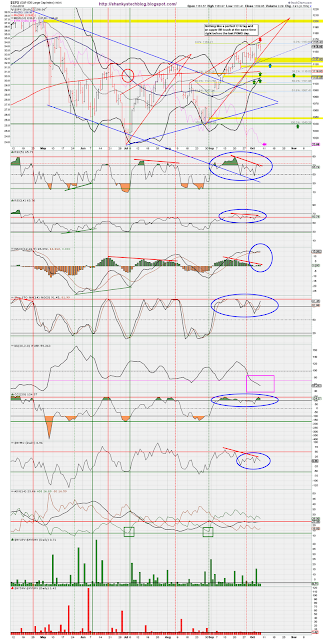 At this point I'm inclined to say the market churns in the 1170 to 1130 range till the QE II announcement. This no longer has anything to to with anything but the QE II announcement. there is no telling what earnings will have in store (the hurdle is still quite low as revisions and lack of respect for lowered revenues is quite amazing). I have been speaking of the promise of QEII since Ben opened his mouth to bring the market off the 1040 lows. Every single penny of appreciation since that point is purely QE II speculation and POMO pump, nothing else.

GL out there and have a great weekend.
Posted by Shanky at 9:06 AM