All is well. The recovery is swimming along nicely. We have our debt under control. The internet is still free. We still have our guns. Who could ask for more heading into the summer fun season. Well, gas prices are still a bit high, but that's no big deal is it?

Three things jumped out at me this morning. First, 27 Huge Red Flags For The U.S. Economy is a good reminder of just how sarcastic I was in my opening paragraph. One of the most concerning of these 27 to me is #6 The labor force participation rate for Americans from the age of 25 to the age of 29 has fallen to an all-time record low. When this fact is combined with the $1.1 trillion student debt non-bubble and the fact that this age group is burdened with carrying the new socialized insurance cost burden, well, that's not good. Oh, and I promise, O-care is not an insurance company bailout (just like it is not a tax, it will cost less, you can keep your doctor and it is all perfectly in the law with nothing unconstitutional or illegal).

I hope we all know that taper-ON was just a lie to further previous lies that furthered previous lies that ..... that the recovery is on track and all their policies and added debt have been the bomb when it came to fixing things. Then came Belgium and their $141 trillion in UST purchases. Never mind this amount nearly mirrored what was tapered, or that there was a mystery buyer through a shady foreign exchange. We all knew that bucket was full and this mystery buyer would have to find another avenue, and they may just have. So, just Who Is The New Secret Buyer Of U.S. Debt? (I really liked the last paragraph of that post).

Furthering the UST and loss of world reserve currency discussion we have As Russia Dumps A Record Amount Of US Treasurys, Here Is What It Is Buying. (hint - it is shiny and hard and came from space) Of course this is on the heals of Russia And China Finally Sign Historic $400 Billion "Holy Grail" Gas Deal which is the real deal. They are not going to kill us or take over our nation with conventional weapons, they are going to destroy our currency and POOF! they win. As I have suggested over the years and maybe someone from Russia has been reading STB - get out of the dollar, get out of their system and into physical - you get safety and you get to take the banksters down at the same time - win, win!

Bottom line is the course we've chosen is now irreversible without serious military intervention. Ha! and I'm not talking about intervention on foreign soil but domestic.  Open your eyes folks. The lies are a mile thick and growing exponentially. We are going to crash horribly. This of course is going to lead to the confiscation of all pension and retirement plans and then mass welfare (well, even more mass than it is now).

Let's do the math again - $18T in debt and $19T in retirement savings (at current market levels). 18 minus 19 = 1 in change. They will need that extra one to pay banksters fees for the deal of course, so it's all about even Steven here I'd say. What, you think they'd do it for free? All that we need now is a real crisis (not that we're not in one - or twenty now), we need a domestic "event" that will galvanize the nation. Think 9/11 but worse. LooooooL - let me translate that, a false flag that will allow them to fleece the savings of millions of Americans under the cover of patriotism so they can cancel all their bad debts and entrench their tyrannical rule.

I've been writing about this stuff for years now and it appears we're finally getting close to the end game. Be ready. It's coming.

Backing it out a bit -

Minis 4hr - Yellow and final (I believe) rising wedge culminating the end of the STB rising red wedge of death. 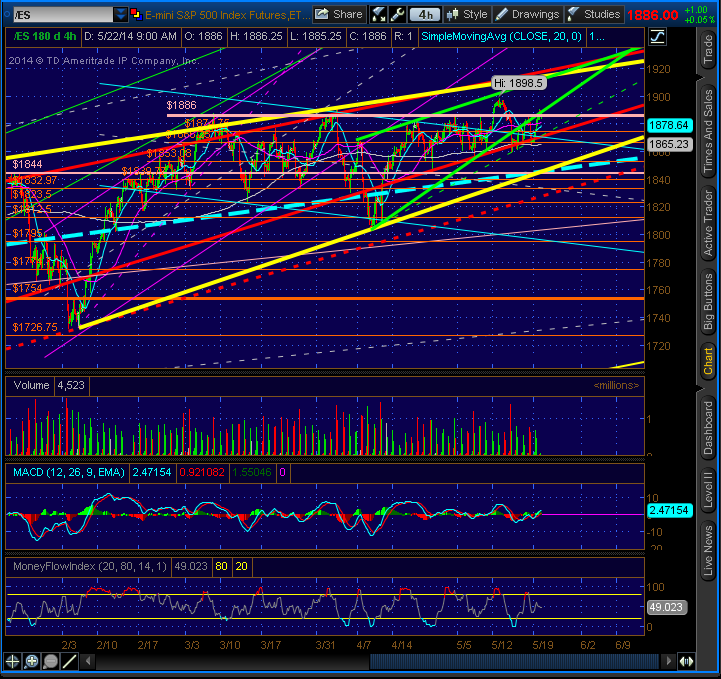 Minis 60m - I added a new (green dashed) lower support to the rising green wedge (third iteration - not uncommon). So, it's either busted and backtesting second iteration support or they have just lowered support and are in a new larger wedge (standard old trick). 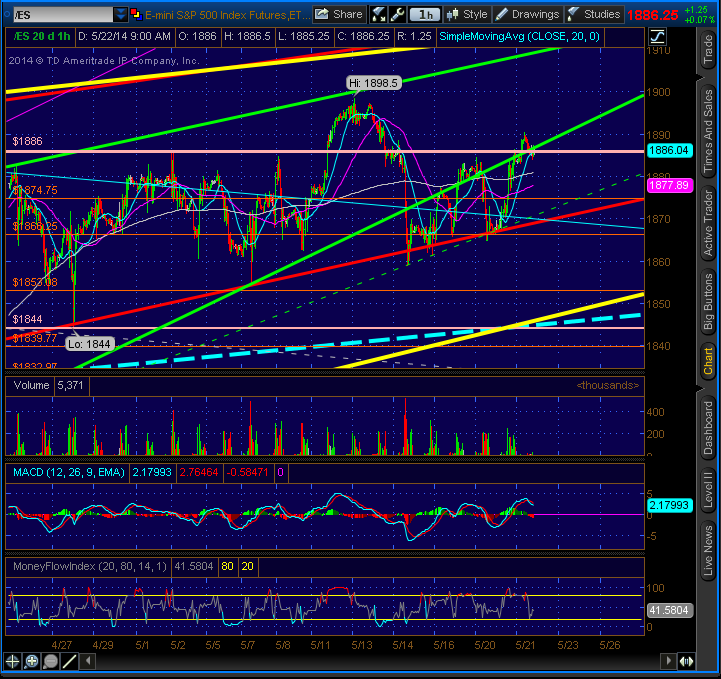 The Head and Shoulders discussion - Yes, both exist and I have pointed this out for a couple of weeks now. Either the 1804 is a IHnS head low or the 1898 is a HnS head top. 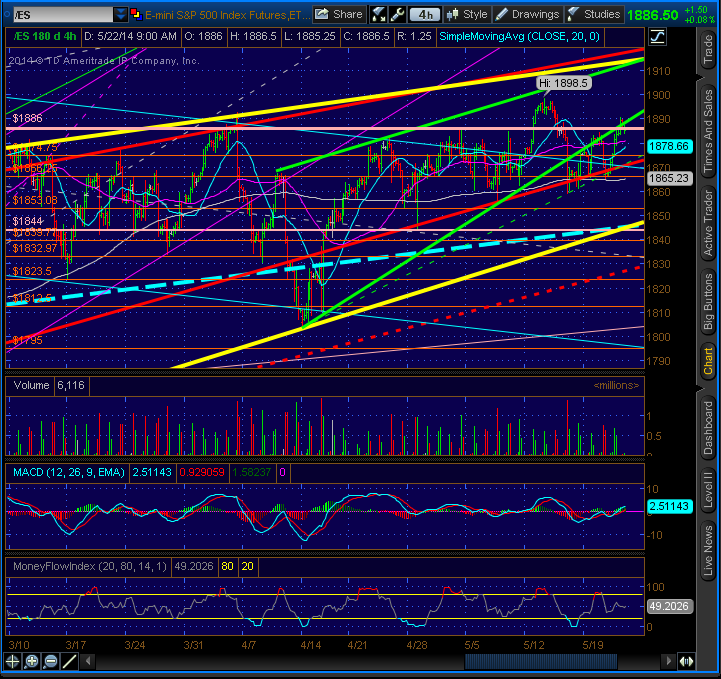 I like down but fear up. They either ramp it to get room above my red diagonal of death or they crash it and go all taper off and QE on. Well, their stealth Belgium QE is not really having much success at lifting these nervous markets now is it? 1886 to 1900 proving to be a tough nut to crack as critical support is literally flying up underneath price. Something is about to break. Sure, they may get another ramp. Who cares if WMT, CAT and a slew of other major market and economic barometers all missed (lowered) earnings estimates for the Nth quarter in a row. All is well. Move along. Risk on. Feed ur greed.


A note from the management: Last day of school! Halleluiah! Let summer begin. Great school year for the Little S's. They killed it and mom and dad are proud. Now, this means that I will be moving into summer mode. That means I will do most post writing at night and some of my content may drift a bit as vacations and late summer nights lead to later morning starts. I'll still be on top of things and here, just that some breaking content that is usually found in the morning post will now be found in the comments section.

Have you shared STB?