Thumbing Thru The News - P3 Anyone?

It has been pretty quiet over the past week or so on the big news front following the Greek Drama's settlement. Is this the eye of the hurricane or just the quiet before the storm?

In a must read post from Zero Hedge -As Budget Deficit Hits Record High, Interest On US Public Debt Hits Record Low - TD notes."How is it possible that unprecedented debt accumulation can result in ever declining interest rates, and Treasury auctions, such as today's 10 Year reopening, in which the Bid To Cover hit an all time high? One answer: The Federal Reserve, which through complete domination of the entire capital market courtesy of ZIRP and QE has now turned market logic upside down by 180 degrees." There are no more rules in this game. The Fed holds all the chips and there is ZERO transparency. Please give this post a read and consider the "simple math" that I keep harping on as to why this whole rescue plan will not work out gets explained in detail.

Denninger really makes the math simple (like 5th grade math) in his post What's Our Credit Limit Again? "Remember - entitlements were half of that $328 billion. So let's see if we can do the math here.Entitlements were about $164 billion last month in spending.  The rest was, of course, the rest.But we only took in $107 billion.So even if we eliminated all entitlement spending we still did not have enough money to cover the rest.Yeah." I keep telling you people that it is gonna be really bad and this is so simple to understand. Maybe it is so drastically bad it just does not register with most. The most deflationary period in the history of the world is coming like a freight train. Everything hs to be readjusted. Be ready."The market and economy are absolutely dependent on the Federal Government continuing to do so.  Should the government not be able (or willing) to continue to do so, S&P 666 or DOW 6,489 will look like a bull market."

naked capitalism knocks the ball out of the park in The Empire Continues to Strike Back: Team Obama Propaganda Campaign Reaches Fever Pitch "This juncture (for Obama to keep his campaign promises and institute reform rather than joining the banksters) was a crucial window of opportunity. The financial services industry had become systematically predatory. Its victims now extended well beyond precarious, clueless, and sometimes undisciplined consumers who took on too much debt via credit cards with gotcha features that successfully enticed into a treadmill of chronic debt, or now infamous subprime and option-ARM mortgages." Please give this post a read. It is a great read.


By the end of this crisis I am prognosticating that 90% of the unions will be run out of existence. Especially if they keep action like this group Moorestown New Jersey Unions Highlight Union Arrogance. I have nothing against unions. I think they are right and good for the people as I hate the greed loving money grubbing corporations that raise productivity and profitability to a point that workers are more treated like slaves than assets. I hate corporate America. I hate it's relationship with Wall St. that drives greed and profitability over worker's rights and well being. Bottom line though is that the unions will have to make massive concessions to survive and they won't. It is not in their DNA. Everything has to deflate massively and the union workers who are some of the best paid and insured will have to concede. They won't.


Last night I touched on the National ID Card being proposed to control "illegal immigration". This is bullshit and you need to know what they are talking about. Please listen to this interview with Ron Paul on the subject. Passage of this is a severe blow to our civil liberties. Do you want the government to monitor EVERYTHING YOU DO? I don't think so. Think about constant government surveillance.

I have to share this again, a one sentence clip from Mish that quotes Pelosi, "We have to pass the health care bill so that you can find out what is in it." Oh my goodness, I guess the concept of blackmail has now spread from the banks to the representatives.

Rasmussen Reports presidential Tracking Poll today - Funny how the Strongly Disapprove line in red really correlates to the SPX chart. I still think it is about 20 points to high.Sadly after the market crashes, I don't think the approval rate will correlate anymore. 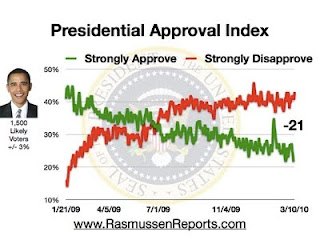 This is post 665 in the old blog, you know what number that makes tomorrow morning's post. LOL, might be interesting. Stay tuned. Sorry about the Morning Protest this am, but I was a little miffed (beyond normal). I should have a rule not to post anything before 8:00, as all communication that happens before my brain catches up with my mouth (fingers in this case) should be banned.

Look for the NCAA Tournament Bracket Challenge coming next week.