Don't believe the retail numbers (or the employment numbers). As I have warned, the people you see on TV are doing their best to pump you full of "it". Remember, they do NOT MAKE MONEY if you are not invested. It is their job to keep you in the market. They do not give a darn about your well being. They only care about their next bigger house in the Hamptons.

Some guy named Bryan on CNBS is a total moron. Right now talking about blow out numbers in retail - I think he and Dennis Kneale must have something going on - this meat head just said "as we see housing coming back" - WRONG!. Read Mish's report here on what should be expected for retail. Now, the comps are to a weak '08 period, the the pump masters (with the BLS), a little accounting chicanery and all the QE liquidity can all still lead this market ever higher, but be reassured it will come crashing down one day in the near future. Total systemic failure is coming. Remember we're coming out of an earnings trough where comps could be beaten by a monkey throwing darts.

SPX daily chart - Topping finally? 60m indicators are toast. 30m are on the road south. The last time we were in this position we got a healthy retreat, but remember the weeklys were in full cooperation. This time the weeklys are headed north hopefully getting ready to set the divergenceMinis are flat coming into the open but it should be noted they were as low as 1114, so they have recovered 6 points since early in the morning.

The double top on the RSI5 screams overbought. The double top in the MACD hist with it declining yesterday screams overbought. S Sto is overbought.ADX is not all that inspired. My two scenarios still stand. This is either a throw over of the triangle and the fall will be to 1044, or this is the ending of the first leg up of the second 5 in the 5.3.5 that I have been speculating about and will be the final run to the final top if it is. I took 1/2 short positions in SDS and FAZ yesterday. It is a wait and see game. Sorry I can not be more definitive in the call, but the manipulators have proven that nothing you see is real or can be counted on anymore. 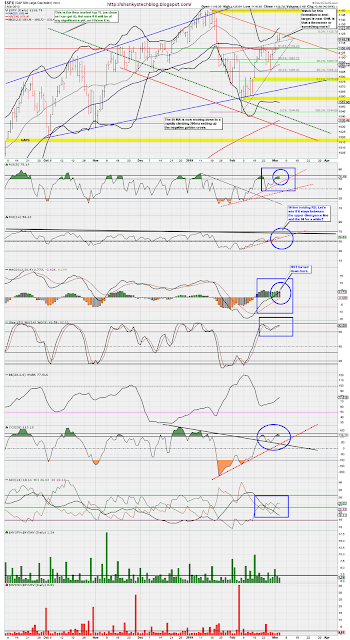 Dollar - Still falling. I think it is toast and the ABC that I called has completed. Here is my UUP chart. If it should continue to run $89 is my upper target.
Oil - Will tensions in the middle east continue to escalate. If they do blow up, we'll find out the hard way that we are to dependent on energy from others in a bad way. Oil is struggling to go higher right now with the dailys topping out.
NG - Near term oversold and I'm looking for a pop here before further weakness. It is sitting on it's 38% retracement right here. 5.21 max pop.
Gold - Climbing in what may be an ABC corrective. Up $100 in a little over a week. 60m headed down and dailys are topping. If the market begins to sell off so will gold I think.
EUR/USD - The pair has hit bottom I think (for now at least). Is it the dollar's turn to get devalued as they systematically work currencies to a point all this debt can be better managed? It has completed a 61.8% retracement of the rise off of the lows in late '08. Looks to me like that was a 3 and now we're gonna get a 4 corrective up. 1.41 would be a good number. HERE is a good EUR/USD vid.

GL! Let's see what the pump machine has in store for us today. The weeklys are not ready to turn just yet, so those all giddy about a turn may have to wait till next week. We'll have to see.
Posted by Shanky at 9:14 AM