Main Entry: lev·i·ta·tion
Pronunciation: \ˌle-və-ˈtā-shən\
Function: noun
Date: 1668
: the act or process of levitating; especially : the rising or lifting of a person or thing by means held to be supernatural.
Nuff said.
Economic Calendar -
Earnings Calendar -
For those of you in total disbelief, don't be. The top was set. Even the weeklys had confirmed what I though was a major turn, but "they" reversed everything mid stream (ahh, the power of liquidity and QE). I had speculated for some time that they were just allowing the shorts to come on board again so they could squeeze some more juice out of them. What is it they say about irrational markets and your solvency? Get used to it if you are not already.
SPX 60m - Same chart as late yesterday's post. The triangles. Are we experiencing a throw over that will last a few days? Is this something more (as I have speculated this would possibly be a 5.3.5)? I'm sticking with throw over of the triangle for now. A crack of 1132 would be pretty strong. 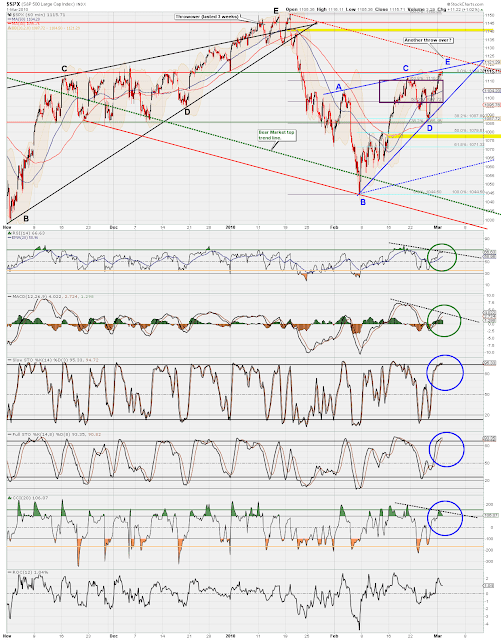 EUR/USD daily - For those of you short, that is a very oversold pair sitting on it's 61.8% retracement of the move off of the March low. The weekly indicators are bottoming as well. If there is any sort of short covering this thing will explode. Now, I think the shorts are right, but they may get punished once or twice in the short term. We all know every country wants to devalue at this point. The question becomes will the rush for the exits be equitable and orderly? 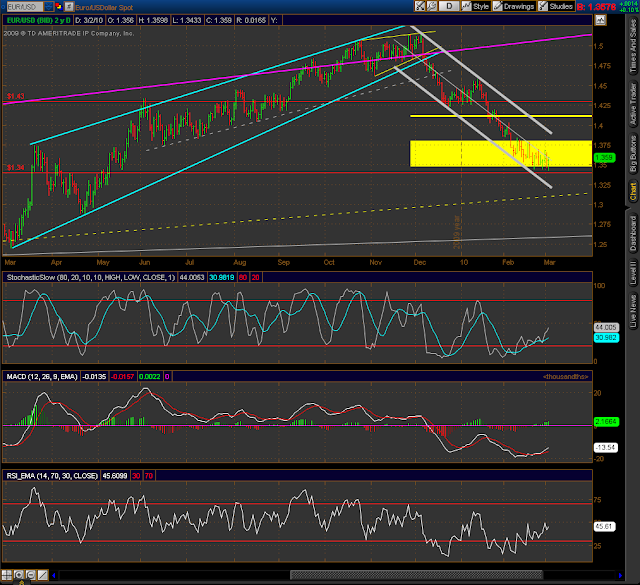 Not sure how positively the markets will react to worse than expected jobs numbers this week. I'm on the sidelines not playing with any of this mess. This being a throw over or ending the first leg of the next 5 up, I'll wait for a better trend. Divergences may get screwed up this am and a break of 1132 may bring more upside than the bears want to see. If my calculations are right (and this is a final 5 up) it measures out to a pretty double top. I'm gonna break out the weekly SPX chart tomorrow and show you where the ultimate divergence marking the top may come. I think it is being set on this move up. This will be the last chance to exit to LT hold positions. Here is a good vid from Marketclub confirming my thoughts.
GL!
Friendly reminder - German ProSieben TV Channel Finds 500 Gram Tungsten Bar At W.C.Heraeus Gold Foundry With Bank Origin - I suggest that you scroll way down in the comments and read about Chinatungsten Online. Not good.
Posted by Shanky at 9:07 AM