Its starting - University of California Campus Erupts In Riots; Student Loan Scam Drives Up Cost Of Education; Expect More Riots - They are coming. I do not watch the MSM anymore, so I do not know if these were covered or not. More on this and other things to come (nothing good of course) in the evening post.

Bent on manipulation should be the overriding theme of this market. If Rosie is right and the SPX is roughly 26% overvalued on a P/E basis, then these unprecedented pops are all that more impressive. The low volume trading is allowing the market makers little resistance to push it where they want it to go. I think, as a trader, you have to keep an open mind and stick with the trend. If you have not learned not to fight the trend by now, please leave the room now and do not return. You do not belong in the trenches trading these markets. The trend will turn. P3 will come. A massive meltdown/slaughter is coming, but it is obviously not here yet, so keep an open mind towards the current trend and NOT on what we all know is eventually coming.

OK, at least one blog I know of has been calling/warning of the possibility of a 5.3.5 move for at least two weeks. Who could that be? Hmmmm? I've been right on most of my calls all the way up leaning with the unexpected upside driven by manipulation and they did not disappoint me again last week. Why do you think I posted the weekly chart last week and asked you to heed its strength? Yes, I took some small short positions on Thursday, but was stopped out at the open on Friday. A turn is coming soon. Wait for it to come to you. I would not trust anything long here. This next move south should be pretty drastic I'm thinking.

SPX 60m -Have we learned out lesson of gauging market moves on the 60m indicators class? They are not reliable (at least not in a way they used to be). I warned you not to trust 'em. Yes, I shorted on what I thought was an overthrow of the triangle. It looked really good. Now if my I'm counting right were clearly in the C leg of an ABC move. I think we're finishing 3, but I can also count a 5 wave completing. The move actually measures best to a double top which will be fun to call. Keep an eye on the weekly indicators. This should be the final move for the bulls. Yes, those divergences are real and should put some pressure on the market (you'd think). 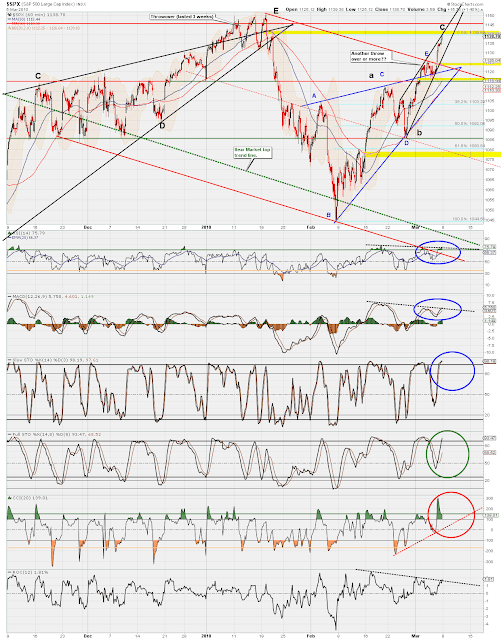 SPX Daily - Overbought and at the upper BB.
SPX Weekly - Still climbing. MACD hist has not gone positive. Bears may have to wait for a green candle there. RSI5 is just under it's divergence line. Let's see if that holds. S and F Sto are still in bull mode.

I'm expecting a correction soon, but I'm gonna look for a turn in the Weeklys to confirm any serious downside action. We've all seen the 30 and 60m cycle all around while the markets have continued to rise. We have also see the dailys remain embedded for what seemed to be improbable time frames. I'm back to watching the weeklys. Be patient. The turn will come.

Dollar - I believe I was one of the only ones calling for the ABC corrective (with my alt scenario as a run to 89). I think the corrective has run it's course and a throw over of a wedge has occurred. If I am wrong it does a 30% retracement from the top here and then look for a C=A run to 89. The weeklys are topped and the dailys still have plenty of room to fall. I'm favoring more downside for some time.

Oil - Who the hell knows in the most manipulated market of them all? I think it is going to near $90 and I may be able to put a gate on the top if the trends continues. Look for a backtest of the initial channel off of the lows.

Natgas - It has gotten to weak to fast IMO. It is blowing out the bottom of it's down channel. The dailys are embedded oversold. Again I'll refer to the weekly indicators that say no big move up is coming. It may get a pop here soon, but don't expect much.

Gold - Dailys are toppy but the weeklys have some room to run. I'll speculate on a double top as it should have continued strength. Now, how it reacts to a market turn will be interesting. I'm not sure if it will inversely correlate with the expected weakness in the dollar, but the setup looks to be calling for that.

EUR/USD - The EUR is gonna get pounded eventually, but what isn't? The race for devaluation is in full force, but the EUR may have to pull into the pits for some fresh tires as it has completed a 61.8% retracement and seems to have found support. Might be time to the dollar to play catch up.
Posted by Shanky at 9:12 AM