I took nothing away from the populist cheer leading effort last night. Nothing new or surprising. More stuff today on the earnings calendar. Jobless report was another stunner IMO. While we are not losing jobs at an increasing rate anymore, we're still dumping over 400k per reporting period. Think about that number for a minute. Remember the first time the number climbed above 300k? That was bad, now 400k+ is just ho hum. Don't worry, the market will accept this as good news most likely. 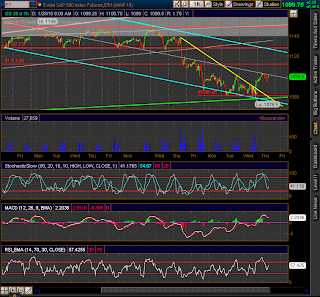 E-mini 60m - It is either a channel or an unformed wedge. Looks to me like the minis have broken a downtrend after tagging supports at 1081 and meeting the lower market support line (green). The question is whether this is an ABC corrective or something larger. Form and the indicators will tell us that, so be patient while the market climbs here. 1111 and 1127 are the two resistance levels I see on the minis. Watch that possible upper channel line. 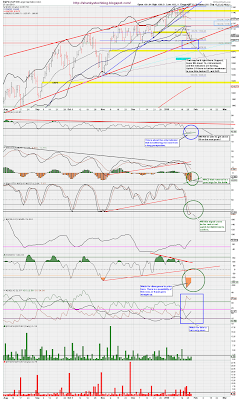 SPX Daily - Back inside the lower BB after tagging the red support line and making a nice retracement of the move off of 1028. 1114 is the 50ma, support and the 50% retracement sit near there as well. If we have completed a 5 and this is a corrective that would be a likely area for top. 1131 is another good spot that may be attainable. With the bull cross on S Sto, MACD hist reversing, CCI divergence and RSI possibly getting in the game there is a chance for stronger upside from these oversold levels. The 60m chart had some nice divergences coming into yesterday. I will note that ADX is not participating yet. 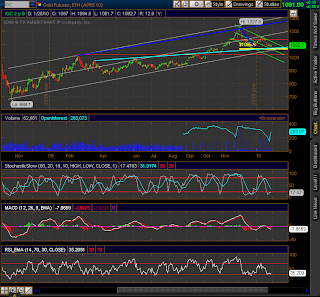 Gold Daily - This chart goes back to the '08 low of 688. IMO that is a nice channel up (gray). the green channel is diving into the lower gray support line, the 38% retracement (yellow line) and the sky blue resistance/support line. This is massive support IMO coming soon. If that cracks it is all over but the crying. If it holds the possibility of a pop back to 1227 is pretty good. Daily indicators say oversold and support will hold. Weekly indicators say more pain to come. 1082 is pretty good support here. 1066 to 1068 should be it near term.

Dollar - Movin on up. Weekly chart says it can run some more, but it is getting NT toppy. My target remains 89 to complete what I think is an ABC corrective before much further weakness. The EWT people see a super strong 5 wave move here. It is possible if there is a flight to safety (LOL). I say currency devaluation is the only game in town. While I have speculated the dollar with a 4 handle I think $68 is looking better. No, I'm not kidding.Now, that may be a few years off tough. We'll have to see. 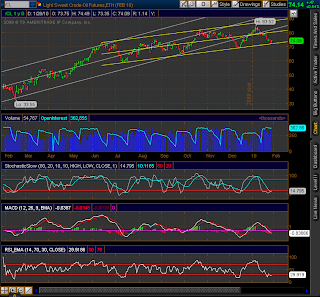 Oil - Continues to roll over from overbought conditions. After nearly three weeks of falling is it time to stop? I think so. Take a look at this daily chart. Support at the lower yellow channel TL and the indicators looking to turn. S Sto bull cross. MACD hist turning up and RSI with a small divergence. If this lower channel line should crack, the 38% retracement lies at 65, so that would be the max NT.

Natgas - Cracked the support line I have been speaking of for a few weeks and took out a support level as well. 38% retracement is $4.67. The 50% support at 4.24 looks the best right now as there is a support level and gap there as well. EIA NATGAS report at 10:30 today.

Enough for now. GL out there. I'm log SSO and looking to add some QID and TNA at appropriate spots.
Posted by Shanky at 9:13 AM