The cheerleaders are out in force. Face it, we lost 80k+ jobs and the government has done NOTHING to solve the jobs problem. They HAVE saved the markets and the banksters FOR NOW and that is it.


The minis took the jobs news fairly well and only tanked about 6 points initially, then a slight corrective and then the continuation. Is this the beginning of the larger correction I have been looking for? 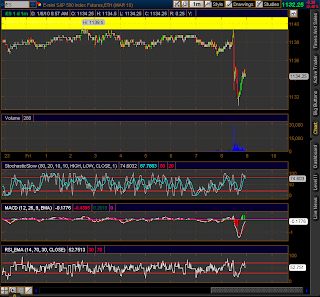 Whats going on inside the minis? Why are all of the calls for tops going on? Here is one good example of many that are all converging right now. The P2 wedge (blue) is running into the 50 to 62% retracement area (yellow rectangle). Price is chasing up the lower P2 bull market TL and is now hitting resistance at the 50% retracement. 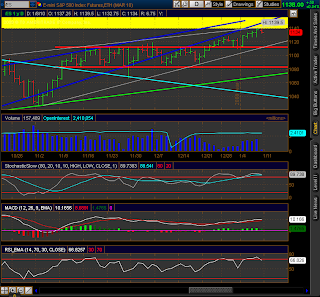 Index Comparison Chart daily - Is the TRAN the new market leader? First to top here and now leading down with NDX and COMPQ beginning to follow. 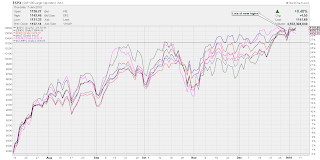 SPX Daily - Face it, every time the SPXA50 crosses 400 a NT top is guaranteed according to this chart. Basec on all the divergences, it is almost time to pop this bubble. I can see why everyone is getting toppy and I agree wholeheartedly, but I have faith in Timmay, Ben and the administration to keep the hot air in the markets at this time. the China rates news yesterday was a big factor. I had speculated they would be first to act on the inflationary front (maybe cause their citizens actually pose some sort of a threat to their government unlike we do). Based on the recent buying volume, although weak, the corresponding candles say the bulls are toast for now. We're close, but not there yet.

GL and have a great weekend.
Posted by Shanky at 9:08 AM