Brown is in, let the games begin. In a historic vote, I do believe this will be CHANGE you can believe in. It is time for CHANGE the people are saying and hopefully this resonates thru the country during the next election. We need all those entrenched assholes out of Washington, starting with Pelosi and Frank.

Why does WB have to be on CNBS during one of the most important earnings mornings of the season? Do I need to hear about Kraft for 15 minutes? NOPE, tape it and put him on Youtube.

Well, guess what? SPX set a higher high yesterday. Whaddaya know? Another round of top callers fall by the wayside. Wait till just before interest rates start to climb. The free money tree will quit bearing fruit and so will the market. take the fertilizer away and it all dies from lack of nourishment. They will not be able to hold off till the consumer recovers. They can't afford it. This will be ugly.

SPX daily - Well, they whipsawed the hell out of that one. The key, which way does daily RSI go. Can it take out the top divergence line. I just do not think it will be able to. On the other hand the dashed purple support line that kicked it back up yesterday and the 50 line and the lower red support line are all in play as support. So do we remain choppy and trending up under the divergence? Do we move sideways between the TLs on RSI? Watch for a clear break. As a bear it bothers me that they are creating some room for a sizeable move up if that upper TL is taken out.

As for the price action. Toppy is all I can say. A large wedge with a wedge for a E touch throwover is a bear's dream (unless the PPT is involved and earnings are coming out that have been rigged for companies (esp financials that are insolvent) to beat handily courtesy of QE, accounting irregularities/changes, 0% interest rates and favorable legislation. A narrow channel up may have formed.

I still have to call for a pullback. I am getting more antsy about calling THE top. Everyone you let go by the wayside as a technician adds a little more caution to the next call. This one was the most tempting yet as the near perfect double top really makes me want to bite. BAC is out of the way and that one hurt the bulls. Now let's get by GS, GOOG and AAPL among others. 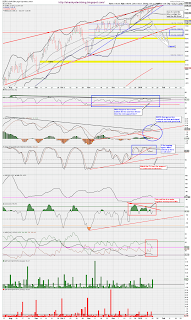 SPX 60m - Blue channel? Black TL? 1031 support. What stops it? Futures appear to be getting some momo. I have some dashed TL's at 1125 and 1115 for your enjoyment as well on some hypothetical TL's that may come into play. 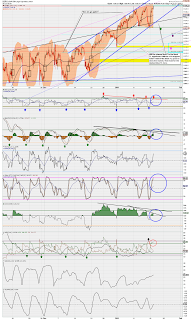