If this sucker is gonna go up we've got to figure out where it is going, if it is going and how high. First let me state that I know (and hope you do to) that this market and the global financial system will collapse one day this year IMO. I'll not rehash all the reasons now cause I believe most of you know why. What we have to do is keep our eye on the ball and not let our overriding assumptions cloud the current market forecast. You do not want to be a bear sitting there with your thumb up an inappropriate place

I'm sticking with my recent posts that there is a triangle finishing here and we're going to have a correction, but will there be an overthrow of the triangle? I am nervous that even though the charts say overbought and unrealistic, there could be a mini-rally of some sort if the employment numbers come in better than expected. Look, they are manufacturing this rally. That is the only thing being manufactured in the states right now. It is our number one component of the whole economy (well besides monetization). They manufacture everything and tell you the truth about nothing.

CNBS did a wonderful job of pumping the "bright"side of the numbers being only slightly worse and yet you would have thought they were a dramatic improvement. LIEsman took the easy way out and was almost apologetic (probably cause he knows he'll get grilled on ZH) in the fact that he could not immediately break down the numbers and tell you the truth behind them. Maybe Comcast is on it's way to needing some TARP funds as well and is keeping the mantra of government/recovery cheerleader alive and well. 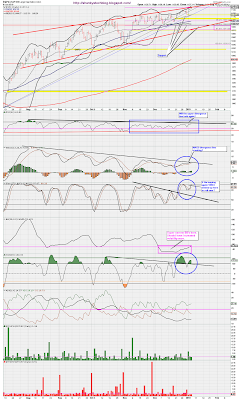 SPX daily -Upper BB and resistance inside almost all the indicators make this probable pop even more unrealistic. Remember, this is not any normal market. It is controlled and thus will do whatever they want it to. Do they let it breathe a little? The charts say it is time for a turn if not over due. MACD cracking the divergence line. RSI at divergence. S Sto embedding and topping again. CCI has set a pretty short divergence. Everything points down here, but for some reason my gut does not like it. The muted reaction to the jobs numbers this am helps along with the overbought conditions and resistance. Maybe it will do what it is supposed to, but my gut is telling me to be careful here.


Folks, don't listen to the BS being spewed on the MSM by the talking heads. Things are dire and NOT going to get better. The problems we are all facing are enormous. Remember that the market is corrupt and that there is no more randomness about the random walk theory. That said, you have to be willing to be open minded to the moves either way and not so entrenched in one belief or another. I personally think earnings season will possibly be good for the market. Bears be patient. Your time will come, but till then be open minded.

I'll be back later with more detailed looks into Gold, Natgas, oil and a few other things.