For your consumption a view from the lofty heights of the IBM tower. The tech giant is playing in the tops of the trees at all time highs. Go figure. IBM analyst estimates from Yahoo are here.

IBM Daily- It is only a matter of time. The daily, weekly and monthly are all overbought. This is just nasty. I have drawn the wedge as busted, but there are a couple of options that could extend it a little farther (not much though). Divergences are there. It won't be long till some sort of strong corrective. 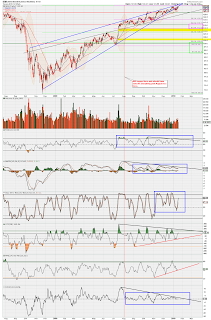 IBM Weekly - Overbought? The RSI TL is just about to crack. See the fibs for targets. The diagonal gray TL is something I like to find. That should be a good support point. For you LT holders. If that cracks again. I'd punt. 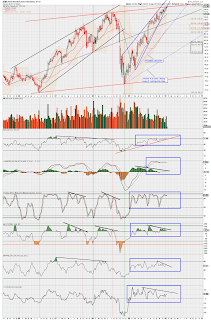 IBM Monthly - You gonna tell me in this economy that IBM deserves to be at an ALL TIME HIGH and is about to bust out that upper resistance line? I don't think so. Even those monthly indicators are overbought. If you don;t have a trailing stop, you should reconsider that. The lower TL will be hit again. One day in the distant future that wedge pattern will bust as well. I promise. The best bull scenario is that upper TL changes from a wedge to a channel. 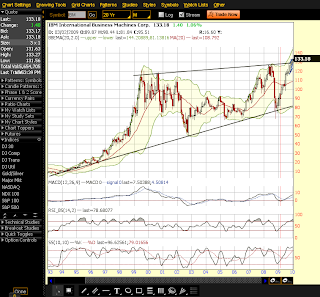