Boy CNBS is just awful this am. Nothing Comcastic about it at all today. A few charts for your viewing pleasure. 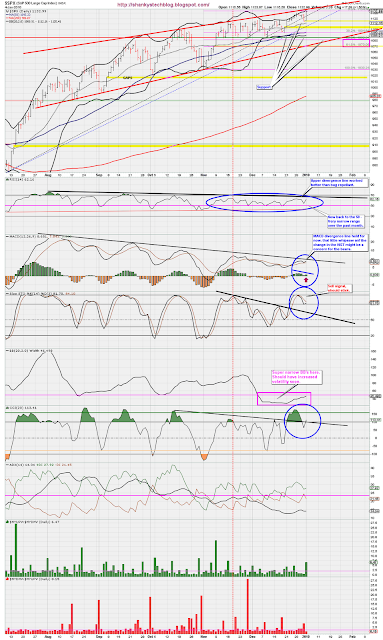 SPX Daily - Trading at the upper BB and at the upper TL. For it to make any significant move up from here would be insane (but what moves up are not insane these days?). The whipsaw up in the indicators yesterday was quite a surprise. they have me worried as a bear somewhat. If they can follow thru and take out the divergence lines the bears will bleed. If not and they hold, as I am anticipating, a descent correction should be in order. One big enough to take out that lower TL and get some buzz going about a 1 down. That would be a tall task though as the support below price has many different points. So the resistance above and support below - sounds like more range bound trading in a narrow band as it creeps up. the 30m looks bad and the 60m has a little room to run. 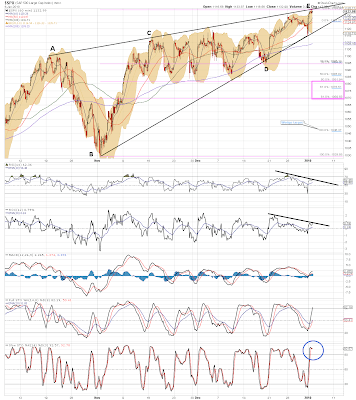 So why am I anticipating a descent correction? The SPX 60m chart has a possible completed triangle. Target 1046. this would be a strong move south and would take out all the support in the chart above. A retrace to the 1080 range would be more realistic, but if the triangle is right, that target should be sound. those divergences in RSI and the topped S Sto look good for a pullback.


The dollar is down a smidge and trading at it's lower support.
Gold is struggling to get any higher in the futures after a strong move over the past few days.
Crude is struggling as well right now to move higher.
NAT GAS is range bound right now and has been for a week.

Still updating and playing catch up.

GL out there. Be careful today either way. the whipsaw to the upper resistance on the indicators is a little suspicious, but I'm leaning it wont hold.
Posted by Shanky at 9:07 AM