Two schools of thought 1) we wake up Monday and it has tanked or 2) the bears have some more pain to endure. There are two possible HnS patterns that back up both cases. This 30m chart (I was about 30m early posting it today on the Dark Side) set some nice divergences that should not be ignored. The sellers could not push price thru 65 support. Almost every time that sellers have lost momo and price had had a chance to consolidate the bulls PPT has been able to come in and push price back up.

So - The blue HnS below has a possible RS forming from this point and the black HnS is completed (same head as the blue one) and is at the neckline. Either way it does not look good. I'm inclined to favor the blue scenario given the position of the oversold markets. That black wedge has completed an A-E formation and may be the catalyst for the right shoulder. Price may stay in the black wedge or breakout to near the target close to the 61% retracement. Either way we have two scenarios that both lead down in a big way.

UPDATE: Either way, the drawn out or immediate, they boht work just fine with the Second Hindenburg Omen Confirmation In As Many Days, Third H.O. Event In One Week and actually telegraph the HO quite well.I believe a trigger is necessary and what is a little freaky about TA is that it at times appears to have a predictive ability. Don't be surprised to see a break of the neckline occur on the same day as the possible catalyst.A rather feisty Denninger covers the HO in this post Oh The Huge Manatee! (Hindenburg Omen) This quote gives an accurate description of what is expected from the HO, "However, the probability of a greater than 5% move to the downside (from the date of the confirmation) exceeds 70% within the next 120 days (four months); the odds of a panic selloff (defined as a rapid 10% or greater decline) is about 40%, and the odds of a crash (defined as a 20% or greater rapid decline) is approximately 20%." 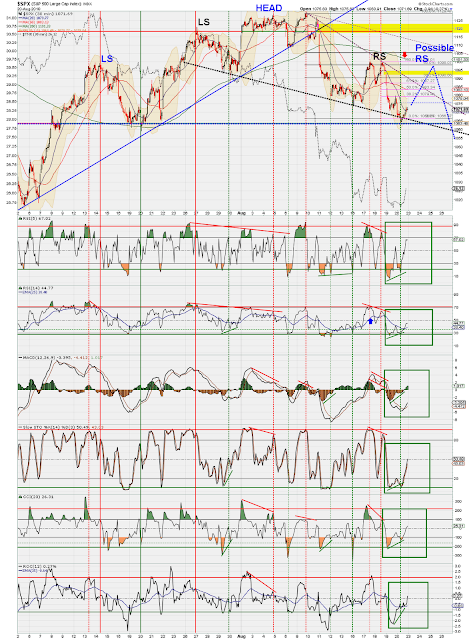 RUT on the cliff? Long Term RUT chart showing it's HnS sitting on a LT S/R line. This one is truly on a cliff. If the green line goes, so does the RUT (after a backtest of course). I think that black 200ma should remain as resistance, but that is not a promise. 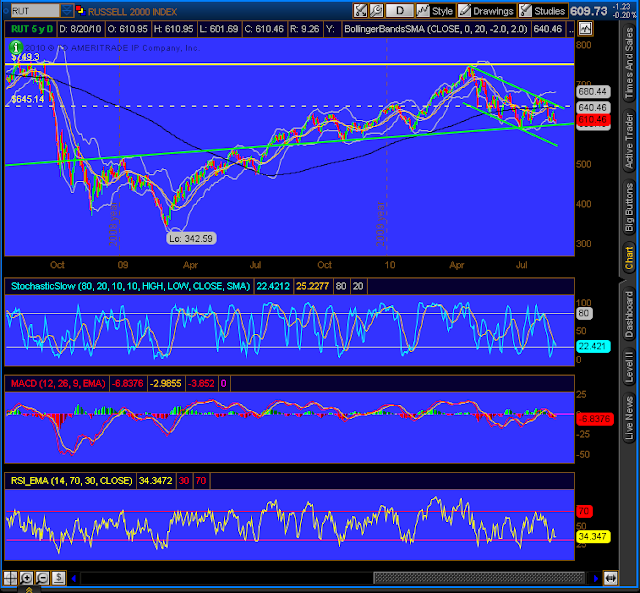 The minis - Poor little range bound creatures. What a tease when they could not crack 61 this morning. Oversold with divergences. Can they push it back up to that 97 level one more time? This morning I gave the scenario of them falling to test that blue diagonal at 55. Still is a possibility, but more doubtful now. That TL will come into play eventually. 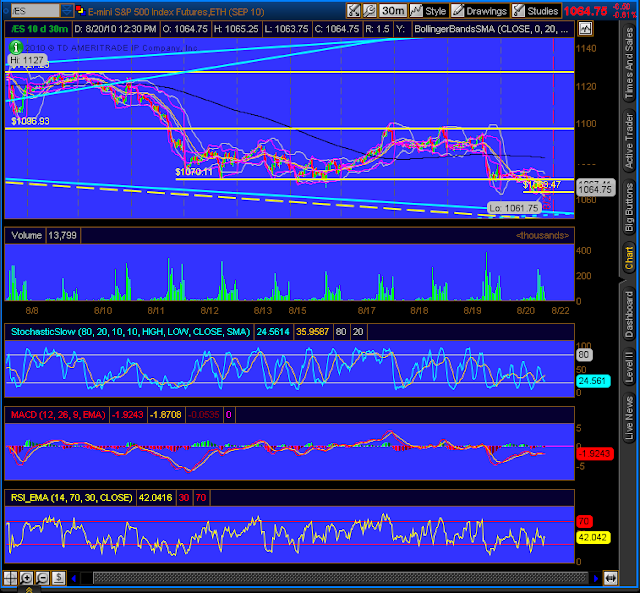 Upside scenario? Well, if it can crack the 97/1100 area with authority, then the 1117 Island Gap is all I'm willing to give it at this time (being very generous to even consider it I think.)

So, some food for thought over the weekend. The charts appear to be confirming the impending doom. Patience will be required to get the trades right. With the two scenarios it can apparently crash at any moment. I personally believe we need another LEH type catalyst. The manipulators are fighting hard and will not quit. We need for them to start turning on each other.

One more thing to get your heart pumping - Flash Crash Squawk call. This is like listening to your favoite college football anouncer replay old great calls before the big game to get you fired up! Enjoy!

This is the typical daily stock market scenario - Bull gets loose and starts rushing everything and the the PPT (people in this case) subdue it and all is well again. Feel free to insert your own scenario. Enjoy.

Have a great weekend. Thanks to all for the views, donations and support. Don't forget The Dark Side where I put it all on the line.
Posted by Shanky at 4:38 PM