Not good. Not much for me to say or speculate on other than how bad is the fall gonna be. The probability of a flash crash this week is enormous. The probability of any sort of noteworthy upside surprise is remote at best (unless they really massage those employment or GDP numbers). We're going down and fast and where she stops nobody knows. SPX near 1040 and DOW near 10040 means they will not approach the round levels at the same time.NASDAQ is at 2123, so it's round level is in reach. RUT, the leader, took out and backtested 600 yesterday.

Minis set lower lows but holding support at the 43 level and riding the neckline of the HnS right now. When this level goes I see nothing to stop it before 1000. I like the 990 level as the stopping point for this first leg down. The big deal today will be who comes in to support the market will the PPT, how strong and at what levels? Where do they bring out the big gins for the latest stick save you know is coming?

Economic Calendar - New Home Sales at 10 and Petrol at 10:30. tomorrow and Friday are really big days. I expect some severe blatant lies form the data manipulators on either the jobs number, GDP or both.

SPX Daily -The MACD is the tell. RSI14 lower low and not setting a divergences is not good either. Price will open out of the lower BB which has the chance to temper the sell off (Last three times a move below the lower BB has generated a correction), but I am not so sure it will this time. Price is also (if that wedge is right) possibly underthrowing that blue wedge. The lack of volume yesterday was quite amusing. I learned on Monday when I thought the market would recover and correct somewhat just how strong the bears are now (or that simply there are no greater fools left to buy the markets). getting a grip on the reality of everything we've been discussing for over a year staring you in the face is a bit overwhelming. Being right and having proven all the government's lies and fraudulent actions true makes it even worse. Honestly, it is a bit scary. 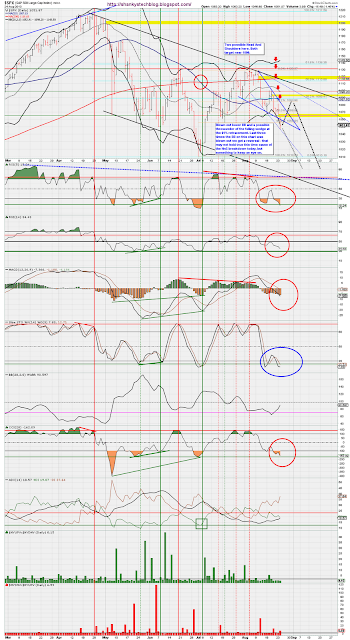 Not gonna chart you to death this morning cause it normally would be as simple as a battle near all those round levels I mentioned earlier, but I don't think the bulls have a chance. They are out of ammo. They have noting left other than pure manipulation of the markets. Merrill bought it all at the the bottom yesterday to support the market, got it to turn and then sold it all at the close. No one wants to be left holding the bag on this one.

When the DOW crosses 10,000 there may be some severe psychological damage that carries thru to the jobs number tomorrow and then GDP in Friday. I like the 975 SPX level for the lows of this fall. The global shock wave should be pretty severe. Tune in to Shanky's Dark Side where I post intraday charts and try to call all the twists and turns.

Thanks for the views and support.
Posted by Shanky at 9:09 AM