Minis flat really since the close yesterday. The main news this morning is covered in Consumption And Spending Both Miss Estimates As Double Dip Fears Push Savings Rate To Highest Since June 2009 along with some upside and downside earnings reports from some majors. The news (outside of earnings fantasy) continues to be weak and point towards an even weaker 3rd and 4th quarter. The stimulus game may be coming to an end (I expect some sort of QEII rhetoric to build as the market takes it's next plunge)

The dollar continues to get pummeled and appears to be reaching a point of saturation. The inverse correlation of the dollar and the markets has been an off and on affair (like many that we know of). 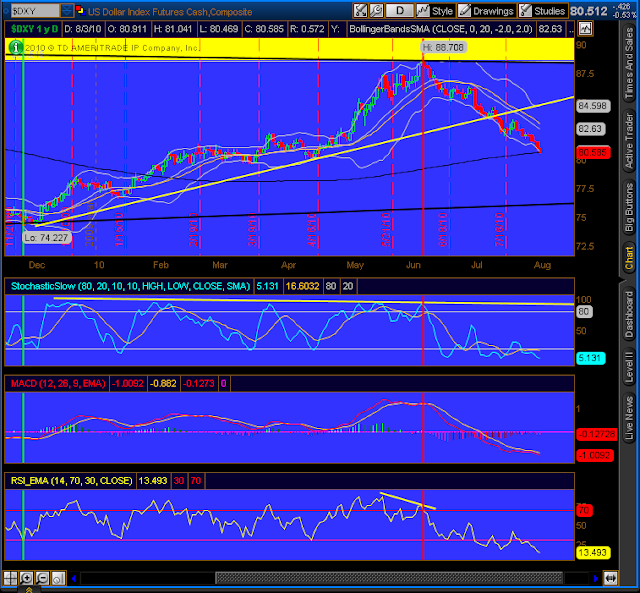 Comparing the dollar to the TNX you get a near mirror image except the TNX is setting divergences maybe noting that rates have dipped a bit to low to fast. Deservedly so, but I'm not sure what could spike them in this environment. Adding the correlation between the TNX and the markets (and throwing in the dollar above) you gotta think that something's got to give here sooner than later based on technicals. 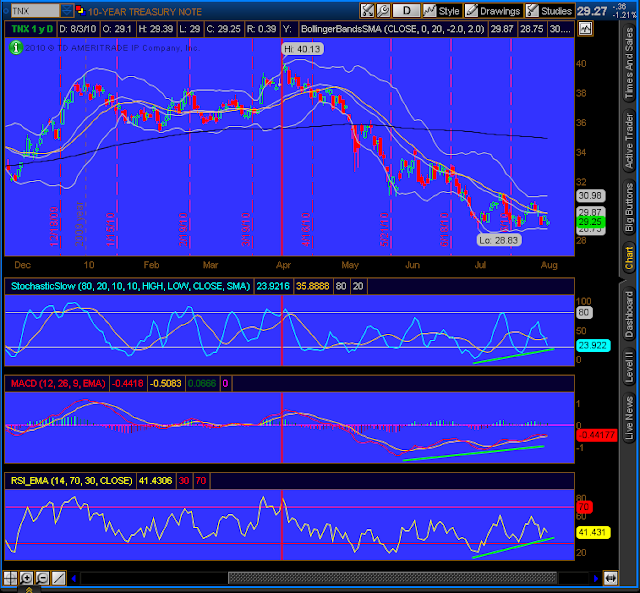 SPX 60m - Still a bit of room to climb (then it can embed and really piss everyone off!), but some pretty convincing divergences if you ask me. Overbought? For sure it is, but can it be turned in the face of the HFT bots and the PPT is the question? 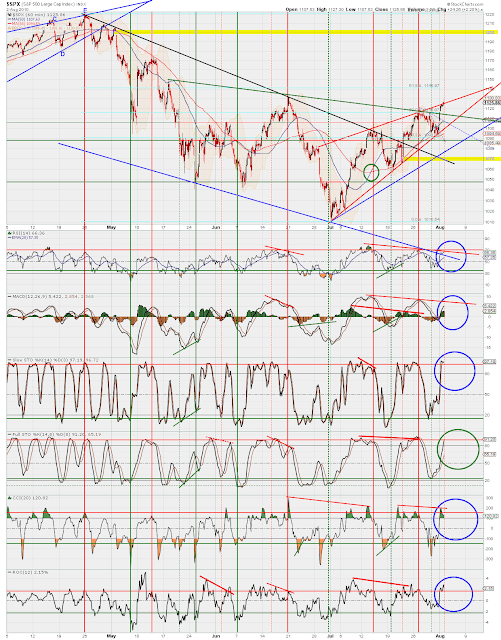 On a side note I cane up with an inverse HnS on the market lkast night that I think no one wants to point to. It would measure just shy of the highs in April. I'll point that out in the future if it is necessary. the weekly charts are climbing stronger now and look a lot more convincing that this run still has some meat on the bones. I'll look for the tell tale signals of the turn as it nears. On the other hand the dailys are embedding as RSI14 continues to climb. So we go the 30, 60 and daily charts ready to turn with the weeklys climbing in the background (just like the top in April, just not quite as extreme).

So, based on the 30m charts and what I perceived as a local effort to keep the market inflated yesterday (according to the squawk I heard all day) it wants to fall. When it falls it falls in chunks I believe. Have your powder dry, be ready to pounce and keep the stops tight. When ( not if) it does turn it should be a fun ride.