Minis have moved from a low of 85 to as high as 92 and now sit just above 90. Minis broke out if the range that held price for most of this week and are now sitting on the top support of that range. After climbing to just under 1100 the fall late yesterday could not sustain any momo. Trying to digest this move is now getting difficult.

Earnings Calendar - Heavy into retail now. No giants left this week that should really shake the markets.

Economic Calendar - Petrol at 10:30, this will be an interesting number and the move in oil and oil stocks should be watched closely with the Iran tensions.

SPX 30m - This chart looks pretty bearish ST. The sell signal was not all that strong, but it did signal and the indicators are still headed south. The 30m VIX looks bullish and has an Island Gap near 25 it needs to take care of. 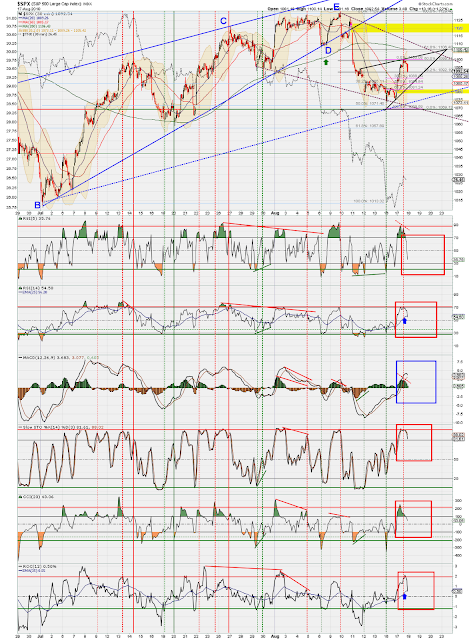 SPX 60m - This chart is just now getting toppy for this corrective bounce, but it is not ready to turn quite yet. 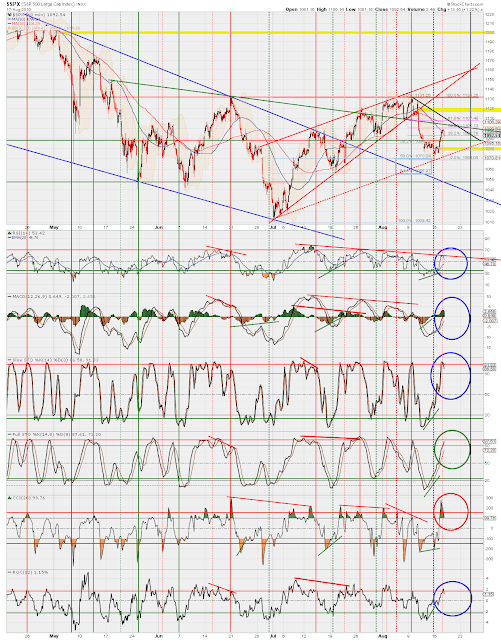 The POT pop yesterday was finally retraced for the most part. What is there to excite the markets today? What "rumors" will we have to motivate the markets higher? 30m minis look lightly bullish here but should be getting toppy. AUD/JPY is consolidating ending what looks to be a corrective before further weakness. EUR/USD has met a support diagonal at a 38% retracement and is climbing up steadily. Gold should be topping out near here backtesting a year long wedge breakdown (If Iran goes nuts gold/oil will as well keep an eye on that this week). Oil is consolidating.

What the hell. Almost everything is consolidating here and I think the market is as well. Care to explain to me why the markets should be rising other than co-located servers? I implore you to keep an eye on the Iran issue this week. Israel could drop a bomb on that reactor at any moment. Markets will react violently. Short equities and long gold and oil would be the ST play.

The market tagged the 1097 level I have been calling for some time, drifted up to the 1100 round number and then failed. with the daily 50ma at 1088 and the 200 at 1116 that may form the next range for consolidation. If the markets do somehow manage to drift higher I'm now adding 1117 Island top gap fill as a possible target. Tomorrows jobs numbers might move it somewhat and they should disappoint one would think. At this time I'm thinking consolidation as Iran weighs heavy on the markets.My bias is that the last top at 1130 will not be taken out and that more significant downside action is to come sooner than later. Till then she muddles around pissing off traders.

We called a great game yesterday over at Shanky's Dark Side. You should give it a visit if you want to see me call markets intraday.
Posted by Shanky at 9:13 AM