Divide and conquer is what I say. I think the game is over for the Fed and the TBTF's. This blow to GS is only the beginning and hopefully the rolling snowball from hell comes sweeping thru Wall St. and collapses every house of cards that is there. I hope this financial reform bill actually has some meat to it and will protect consumers/taxpayers like you and me from any further damage all while taking down the TBTF's and landing the lot in jail where they deserve to be.

Earnings Calendar - Getting into the energy group

GS and Greece dominate the headlines. I think it all depends on how the GS sponsored idiots that run the show in Washington bring it in the meetings today. Will they prove to be the spineless paid off bastards that we all know they are or will (only since it is an election year) someone with a solid brass pair stand up and let 'em have it. If someone should prove to be worthy, expect it to be one not on the reelection hot seat or without a strong desire or career path to work at Government Sachs.

Greece and the German elections are key as well. How I did not make the easy call months ago that Greece issues would not be resolved till after the German elections is beyond me. Sorry I missed that one. Merkle ain't about to write a check to bail out the bankrupt Greece. Who are we kidding. These morons running the nation states are dumb, but when they see real trouble like Greece has, even they know that it is a hopeless cause. Expect more and increasing protests as the candy is taken away from the Greek populace and they discover they will have to work for a living.

Minis this am are down 5.25 sitting on the intersection of the March support line, the February support line and the bull corrective's top resistance line. With the 30 and 60m oversold, I would not expect straight down after the open. I would watch RSI as it approaches 50 on the daily chart. Volume is heavy for pre market action. If they crack I really think she falls to the 1125 area. As I have been saying, the markets are at a place they either take off and shoot to the moon, or they give up and correct. Given the lack of confirmation of the initial break of the upper resistance line and the inability for any continuation, the overbought diverging indicators and the excessive bullishness of everyone I can only call for a correction here that has some bite.

SPX Daily -Hard to ignore the divergences on this chart. Can RSI get thru 50 line? If not more slightly upside should be expected. If so, I think we crank it down to the 1152 range. 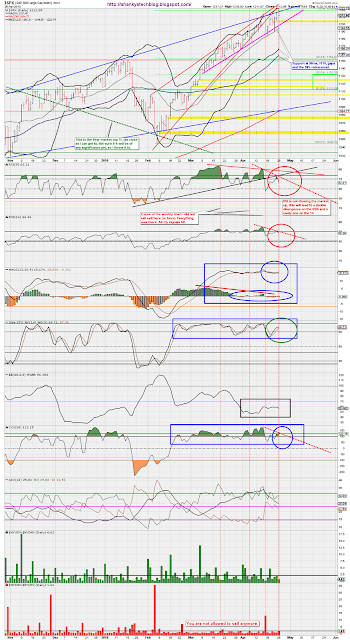 SPX 60m - Decisively toppish, BUT those TLs under the indicators could signal a turn and one more pop. I don;t think so, but they are worth watching. 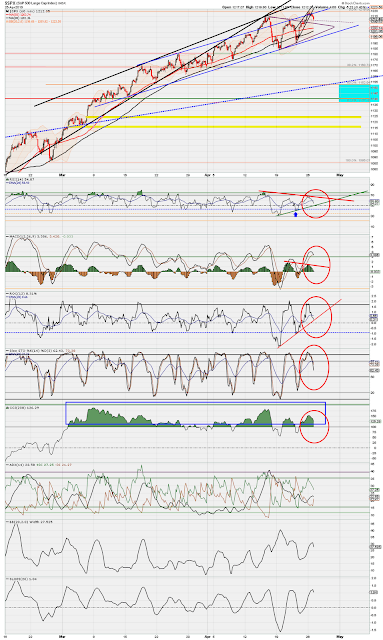 We need to be patient and let this bad boy unfold. Don't get all giddy and super short. Yes, it looks ugly as hell and the news is horrible, but the game is still rigged. Stay nimble and let it play out. I hope this is it. I wanted to call a top yesterday, but for some reason held off. Probably cause they control it and the PPT will support it. I'll give blow by blow here if something good happens. GL!
Posted by Shanky at 9:09 AM