Sorry that I keep bringing you these same charts, but I have to say that I think they really point to a top or some sort of correction (meaningful or not).

Daily the whole run - You clearly see the wedge I have been calling in yellow. The two correctives in sky blue and the final thrust from February in the green wedge overthrowing the bull correction's top TL right now. 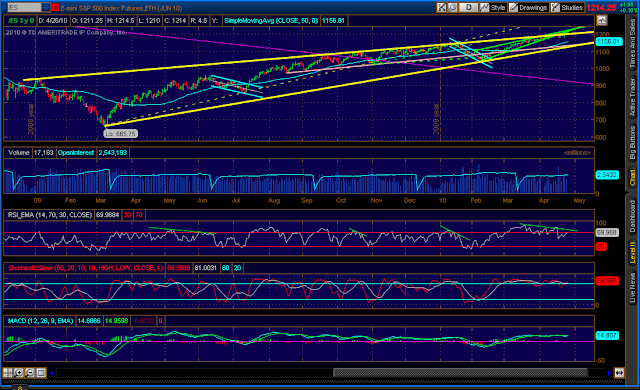 Same daily chart that is drilled down to catch just this year- The extended overbought indicators tell a story, but I think the severe divergence in the RSI tells of some sort of turn coming. The overthrow of the yellow top resistance line and the extreme move from February lows needs some sort of breather/profit taking. IMO this is the suckers rally blow off top. 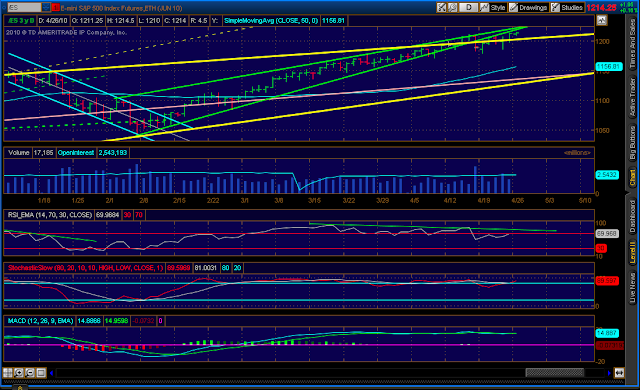 E-mini 60m chart drilled down - here you can see the interaction with the trendlines. The market (at least at this time) is struggling to stay above the yellow bull run upper resistance line. The backtest of the green wedge last Wednesday and the apparent one to come in the morning combined with the larger swings might mean the action is telling us something is brewing. The danger to the bears is that resistance becomes support. The danger to the bulls is the severe over bought conditions on the daily and weekly charts. 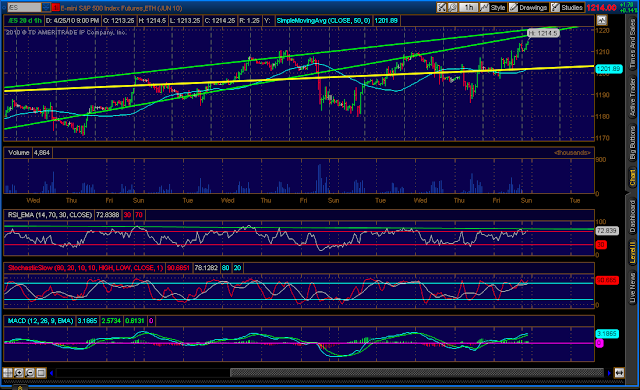 I'm not calling top or saying top, I'm saying potential worthwhile correction that could be the top though. First it has to be proven that the market can be turned to some degree. Then it has to be proven that sellers actually still exist. Then it has to be proven the bots and front runners that are supplied by and endless flow of cash from the fed can somehow be overwhelmed by the revolutionaries that want to sell. One thing is for sure, when the selling starts and with the fresh memories of the last fall, not many will want to hang around for the carnage again. Can they keep the market afloat till the election? Will one faction want the market to collapse so the other will lose power? How the story will play out no one knows, but I promise you this, when it ends it will not be pretty.