I highly suggest that you read Sentiment is "Off The Charts" Bullish on Zero Hedge. Of the 11 horrific charts in the post, this one impressed me the most. It is Margin Debt as a Percent of the Economy. Nothing good happens up here - no matter who is in control. Risk off? Really? More like, "event" when? 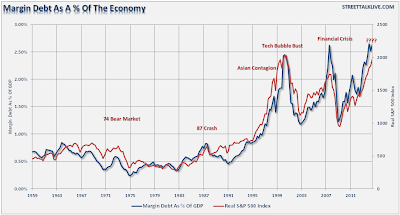 The STB Bullish Percent chart could be in that post as well. BP to SPX is even worse now than it was in July when I was freaking out then. Negative divergences on this chart tend to not bode well for Mr. Market. 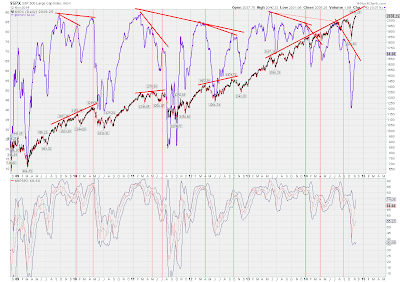 I'm sure you don't need a review of the scenario we're in right now, but a glance at this chart should make you question things just a bit (especially after reading the ZH post above). Overthrowing multi-year resistance with all those monthly negative divergences is not a good scenario. ZH also has a post 392 Weeks that mirrors this chart. 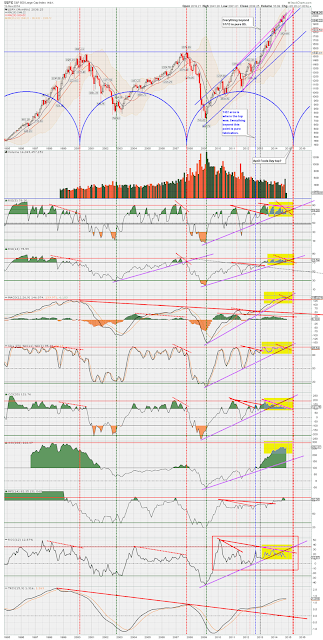 "Unfortunately, since most individuals only consider the "bull case," as it creates confirmation bias for their "greed" emotion, they never see the "train a'comin."

Hopefully, these charts will give you some food for thought. With everybody so bullish, what could possibly go wrong?"


It took me a while to figure out the Fed's game. First it took some time but this new QE things finally caught on. Liquidity was the fuel. Liquidity was everything. Then later reality kicked in, conspiracy theory became fact (again). The markets were rigged and "Follow the Fed" became the STB daily mantra.

Unfortunately, the Fed sees all these charts and others (bond markets, overseas markets, pm's) as well. They know the rubber band has stretched to the max, any more pressure and it will snap.

Yesterday I covered QE and the myth that the taper was real. Their backs are to the wall now, and they are on their last clip of ammo. This time they did "end" QE, nominally. Now the banks are pumping in all that free cash they accumulated over the past few years. This IMO is not an accident but a known/planned action. They knew the day would come they'd have to stop QE, but the liquidity train must keep running - or else.

So, even though we see all the charts, the extreme levels of insanity, greed and control must persist, for if they don't, then everything, every policy, every dollar printed, every lie about reform, everything collapses. This moment will come, and what we become of after this event is anyone's guess. One thing is for sure real pain will be inescapable by all.

All I can do is try and warn you of the potential of this event happening. Remember the gates are closed, cause when the event happens and everyone runs for the exit at the same time they will find the doors closed. Capital controls will kick in and your hard earned money will become theirs.

SPX 30m - Still, my best guess is a retracement to possibly the 1980 area to set the lower red rising wedge support and then one final ramp to shut it all down. 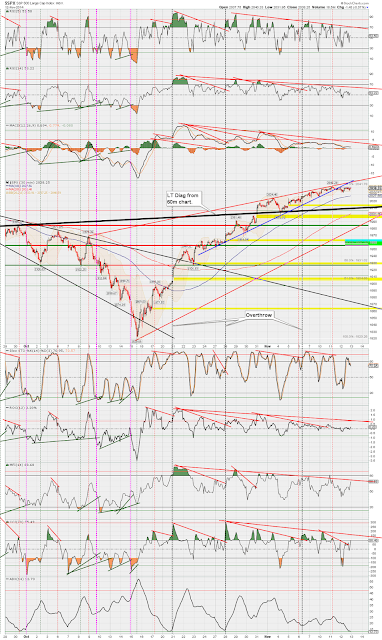