Well, it's Friday. Today has the potential to really be a dull one with FC and holiday distractions. On the other hand there may be some real drama in store after QE4 was pissed all over by Mr. Market. Me thinks the winds of change are beginning to blow and the Fed's levitating magic may be finally running out of power. Like the Winter Warlock, Their evil powers will not last forever. Now let's just hope the Burgermeisters all die off sooner than later so we can get back to being free.

I think war watch needs to be lifted to an elevated status. I used to get so pumped with every advance on Israel, but I have learned that all in its own time. They will get their MENA destabilization and it will only occur when they are ready or need a distraction. I still contend the war is one of their last resorts and will only come after or during a market crash. the war will first serve as a distraction and second will be used to impose martial law over the continental USSA.

This will be when they pull the plug on the internet (nice knowing all of you, thanks for coming, make sure you get all your belongings before you leave) and on your financial assets as well. I'd say after the first of the year if you are not prepared for total state control of everything then you are going to be really screwed. Remember they control the power and water. STB's time table for total social unrest ..... two to three years is my best guess. Could be sooner.

Soon after this the "card" or "chip" will come which we all must have to commute commerce. Yes, STB is finally crossing the bridge to end of days type shit. I only follow the signs and try and let you know what's coming. Over the past four years I'd say my track record has been pretty good, so I would not start discounting some of the stuff to come on the blog. Heck, if you can't see it coming you really need a bitch slap to wake your ass up.

I suggest you listen carefully to this and research REX84 Government Continuance Strategies if you doubt any of the above.

And at times I wonder why I can't get into the Christmas spirit this year? Like, DUH!

SPX Daily - I've been talking about the backtest of the blue wedge (the final formation of the multi-year farce controlled by the Fed)for a few weeks now. Under normal conditions this would be the ultimate area to exit longs and finally get short for the long haul. Of course I said "normal" conditions. Nothing is normal about this rigged POS market, but maybe with the rejection of QE4 and the coming FC issues combined with global unrest normalcy may be returning and reality may just bite the elite crony capitalists in the ass. My 1432 level and backtest has held thus far. Readers know this was as high as I was willing to give the backtest. Now for the scary part - where do we go from here? As I said above, if you are not prepared entering next year, you should be. 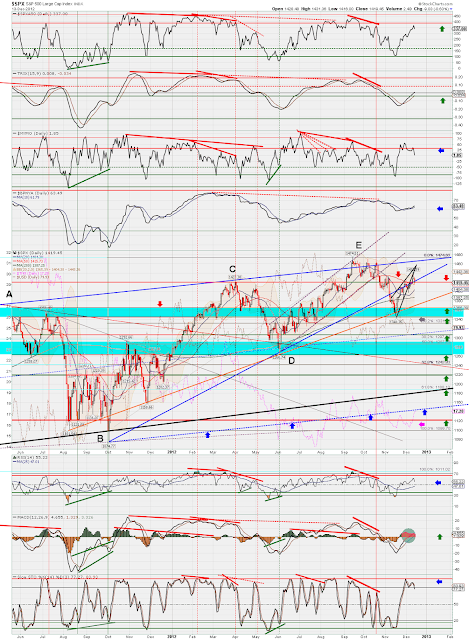 Minis Daily - not the prettiest set up for a reversal in the indicators, but the charts and price action look pretty good. Falling channel to the first retracement wedge which is breaking down now. That white rising diagonal is Oct '11 support. It is a major point in their game. Below this Big Blue, 1374 and 1341 are the three major points you need to know about. Below them there is not much left. The next leg down will be the wake up call and it will not be pretty. I believe the backtest of the rising wedge at the LT green HnS support diagonal (1438) might have been the last long exit point for possibly decades if not forever. 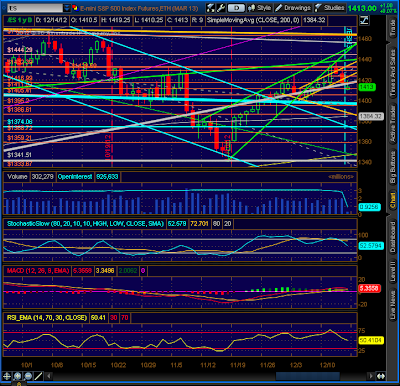 Minis 60m - Possible HnS developing. If they can pull it back to 1400 to complete the head and then rally thru the end of the year to 1420 area that would set up a small but notable HnS that would backtest white major support and be the tru last exit point. So, I'm looking to 1400 at this time. It could get worse, but the news flow should stop some of the slide at least till Christmas I would suspect. 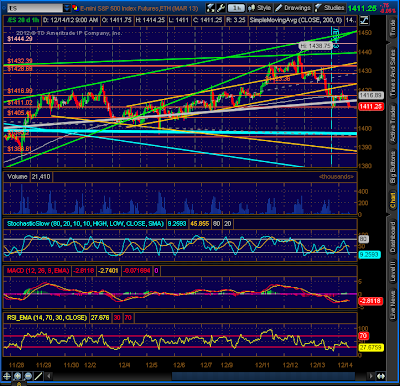 If you can't tell, I'm finally ready to cross that line. I think the proverbial (and seasonally speaking) Goose is cooked, and their game is finally coming to an end. Please listen to that video link carefully above. I also ask that you research the District of Columbia Act of 1871. There you will find out who is really in  control. Time to food and ammo up folks if you are not there already.