Frustrating isn't it to be a realist grounded in fact and not being able to laud the markets prowess due to the Fed's eternal backstop? So here we sit with the so called fiscal cliff upon us, the Fed soaking up over 90% of new treasury issuance and the SPX is back over 1400. All is well folks. Buy, buy, buy! Go spend till that CC you have is maxed out and we'll send you another.

As for the fiscal cliff, just like the last three instances were called on this blog, an 11th hour solution is the only way anything happens in DC. They will BS and bicker posturing like peacocks all the while getting absolutely nowhere in the worlds greatest pissing match, until they have to. All investors can do is sit and wait.

What a sad scenario, to have the nation held hostage to a bunch of self serving special interest driven stooges. If you think they are fighting for you think again. They are playing the game waiting on the Fed to write the next big check nothing more. The saddest part of the whole scenario is our representatives are bleeding the country dry, basically committing assisted suicide, and they all believe they are doing a great job. Nothing happens, absolutely nothing till the 11th hour. And if you ran your business that way? Shuh right, you would be in the same boat as the government.

The problems are not just localized as you may know. Greece is about to default on some of its debt. Don't let the term "write off" or "write down" confuse you, they are defaulting, and it is about darn time. More to come. Remember years ago I  thought that this problem would only begin with massive default. The wave nay be about to start.

Negative interest rates? They have been seen here and have now shown up in the financial mecca. Swiss Capital Controls Escalate As Credit Suisse Sets Negative CHF Deposit Rates. I guess the elites rape has become a full blown circle jerk as now the tables are turning on even their own investments. The ESM downgrade was another signal that the farce is coming to an end.

What is amazing is investors don't get what's at stake. Under Czar O, we could all wake up on January 01 to a whole new world financially. The risk has never been greater. Some get it and have repositioned portfolios accordingly (cash in mattress and gold in safe) at least to some degree. Others just roll along oblivious to the potential ramifications of a government 'fail'.

Either way fail or resolution, the problems will persist and only worsen as they continue to pile on the debt. The clock is ticking folks. They may be able to reset the timer on the financial nuclear disaster one more time, I suspect they will. They may have defeated the first "Odd Job" in the vault of Fort Knox, but the next round more villains will come and the battle will soon be a foregone conclusion.

SPX Daily - By now you should be dealing with the improbable market ramps like a veteran. I'm sticking with my 1432 max for now. Dealing with the 50dma and the 1422 backtest right now is a bit of a chore for the bulltards when combined with the FC issues. 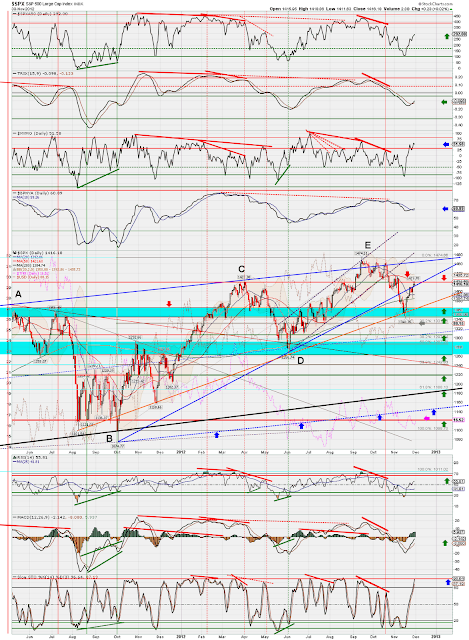 Minis daily - Rising green wedge into the double HnS (March '11 and September '12 - green) neckline backtest. All sorts of technical battles are being waged here. I'm not sure if any of them will matter (or be obeyed as they should be for sound markets functionality principles), the Fed will drive the risk on fiasco to the breaking point eventually  Just make sure you are not long when the carnage starts. Normally I will not tolerate a move above the 61% retracement as a bear. In this case I'm willing to go to 1432 resistance, but that's is. Anything above that and there is no telling where they will take this thing. 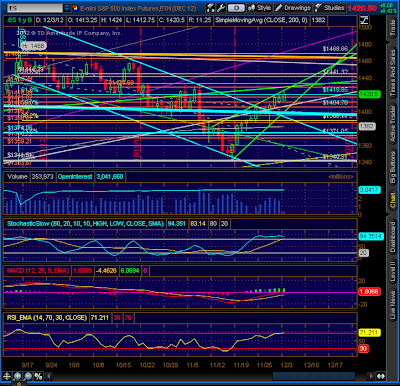 More calls and details below as usual.