I read this and said to myself, there is no need to write anything else. If you are tired of my broken record posts, sorry. That's life. This is the new normal. Just so you know I am not the only one preaching this mantra, read this -

"Bad news is once again good news. Asia sells off on Monday's weaker profit news; the Bank of Spain says that the Spanish economy is expected to see a negative print in Q1 which if confirmed will ensure a fresh recession while the budget statistics released by the Spanish government yesterday showed further deterioration in its fiscal situation, per DB. The deficit for the first two months of the year was €20.7bn and this does not include state and  regional governments’ budgets; lastly American housing slump accelerates as MBA mortgage applications drop for the 7th consecutive week with applications down 2.7%, on the back of a 4.6% decline in refi applications, the lowest since December 7. And futures are...green. Which is to be expected, since good news is good news, and bad news is, thanks to the Fed, and in this case uber-dove Rosengren, who said more stimulus is on the table, better news. It is now obvious that the Fed will not rest until the market is at fresh all time distorted, manipulated, nominal highs." Overnight Sentiment: Teflon Centrally-Planned Markets Send Futures Green | ZeroHedge

What else can you say? I apologize, but that is all there is to it. The QE carrot, CTRL+P, kicking the can, eternal easing; call it what you may but this is reality in this centrally planned market. Of course a sane few know what's real and what is not. Those same few know how badly this experiment will end. Sadly the sheeple have no clue of the the great fleecing that is to come when the banks take everything.

The "recovery" is bullshit. Everything you read or hear from your (or any) government is bullshit. they are lying thru their teeth to keep the story alive that all is well. How about this bit of cheery data just released on durable goods this morning, "This was also at the highest level since the series was first published on a NAICS basis." That's right - inventories just hit an all time high having increased 26 months in a row. And now you know where US economic "growth" has been hidden all these years. Durable Goods Miss, Inventory Stockpiles Soar To New All Time High | ZeroHedge. That's right they may be making it but no one is buying it (which is the polar opposite of they are saying it "recovery" and everyone is buying it). The great consumer (that would be you and me) is dead.

The global Ponzi can not run without its consumption aspect (that would be you and me). Our job is to consume. The rest of the world's job is to buy our bonds to support that consumption. In sheeple terms - they give us money to buy their shit. When they stop giving us money (buying treasuries) or become net sellers of treasuries, everything breaks. So what does the incompetent POS Fed do in that case? They start to print (CTRL+P) to make up for the loss of funding. Then what to the banks do? They hoard the cash not allowing it to reach the public (don't lend). Then that leads to a massive hoard of cash that will one day hit the streets and cause some serious inflation. Can you say Argentina or Zimbabwe?

My hands are tied as a forecaster. I believe TA will get the trade right. You have to remember as a trader that nothing is real anymore. You can not trade using your brain. That is an immediate FAIL for now. The Fed, the treasury and the central banks control every tick. I can not cover the thousands of issues the globe is facing now. The one that does matter is that there is no economic recovery. We never left the recession. Government spending and Fed printing are the only things keeping the doors open right now. They can not print and spend forever.

So, STB recommends patience, form and follow the Fed everyday. I believe I am one of the few remaining that has not called a top yet. STB is staying the course for now. I do believe we'll have one more sizeable correction soon and then the markets will recover via the glory of QE3 into the election. That has been the party line here at STB. The only other option is the markets do not correct and the promise of easing keeps the liquidity infused, centrally planned markets afloat. This can not last forever. The other STB party line is after the election all bets are off.

Gangsta style trading bitchez! Hit and run, scalp, do not swing for any extended periods of time, always have a plan and always use stops that is the only way to play these days. Let the turn come to you. You can not make the market do anything no matter what is right or wrong in the world.

Minis 60m - The purple resistance diagonal held again yesterday. Price wedged into it and failed. Now the 38% retracement of the move from 1380 to 1419 is supporting price here. Next is a major support area between 1400 to 1393. that has to go before we can think of looking any further south. All the charts look nasty. the market is ready to go, but as I repeat over and over a catalyst is needed to generate real fear. Fear that is greater than the benefits of eternal QE to get this market headed south. I'm afraid we may need my "event" to get this market to turn from here. 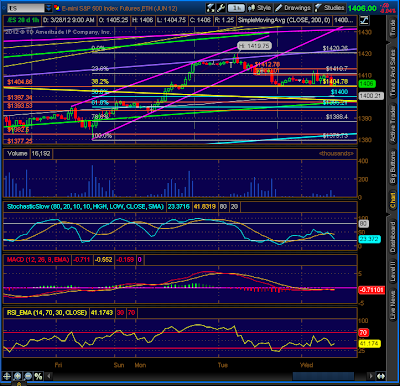 I'm going to actually update the chartbook today to see if there is anything worth looking at. I have promised a chartapalooza, and you will get one soon. Bottom line is with the Fed openly talking more easing all you can do it sit and watch the sickening rise in the markets that will only end in total destruction of everything via your government and the Fed.