The Greeks PSI deal is done for now. The ramifications are still to be felt, but everyone is breathing easier at least for the moment. Now we begin the Post Stimulus Insanity period? "This deal may have sown the seeds of a major political and economic crisis at the heart of Europe, which in the medium and long term further threatens the stability of the eurozone." OpenEurope Verdict On Greek PSI - Pyrrhic Victory Sowing Seeds Of A Political And Economic Crisis In Europe | ZeroHedge.

How could a country the size of Massachusetts with over $200 billion in debt be an issue? (/sarc) This thing went off without a hitch. Easy as pie. Bondholders came to the table ready ad willing to step up to the plate, take their haircuts and do what was right for the good of the globe. Or did they? "Yes indeed, the deal was so difficult that the Greek parliament chose to enforce it on holdouts by gunpoint, more specifically retroactive collective action clauses (CACs)". Mish's Global Economic Trend Analysis: "Success" at Gunpoint. Nothing like a little influence to get a deal done.

Of course things are just fine. If they were not countries would begin to do things like Venezuela has already done and start taking their gold from the vaults at the Fed and keep it in a place they know to be truly safe in their own country. Switzerland Wants Its Gold Back From The New York Fed | ZeroHedge

In the meantime at home things are just rosy. Well, that is as long as the government keeps the printing presses in overdrive. We learned about the farce in consumer credit this week where the student loan bubble continues to expand. Did you know that, "The federal government recorded its worst monthly deficit in history in February, according to a preliminary report Wednesday from the Congressional Budget Office that said the deficit in fiscal year 2012 is already more than half a trillion dollars." Govt. sets record deficit in February - Washington Times. That's comforting to know isn't it.

The other MASSIVE issue that you MUST be very concerned about is who controls our military and does congress or the constitution represent anything anymore with regards to the military. Your president is WAY OUT OF CONTROL. Please read the following -

Pentagon Launches Desperate Damage Control Over Shocking Panetta Testimony Alex Jones' Infowars  "Panetta’s testimony that the US looks to obtain “international permission” before it acts, allied with Obama citing the UN as the supreme authority while trashing the power of Congress, prove that the United States has ceded control over its own affairs to unelected international bureaucrats, just as the countries of the European Union have done likewise."

So Obummer can't get reelected? His war chest says he'll win by a landslide. Obummer has a 140m to 60m advantage over Mitt. funny thing - Santorum still does not have as much as Bachman or Cain. Banking on Becoming President | OpenSecrets  2012 Presidential Candidate Fundraising Summary. Corporate cronyism folks that is all it is anymore.

As for the markets, Patience and form. The bears gave it their best shot, then they saved Greece, tossed out a few QE rumors, had a couple of well timed economic data releases (all according to plan) and yet another crisis has been averted. Thank goodness, I feel better now! Now we have the FOMC meeting next week and the Greek D- Day on the 20th. Looks like the holding pattern is still on and the planes will have to continue to circle the airport.

Minis 60m - This morning I flipped from the channel to an expanding wedge. I've been discussing backtests all week. Green support is now complete as well as the blue support. Please note the severe lack of volume yesterday. 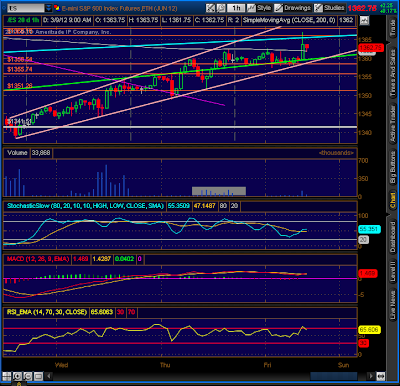 Minis 4hr - Note the double resistance and the pullback this morning off the spike. this may turn out to be a major turning point as a sell the news event could occur. Don't get your hopes up though cause the FOMC meeting is next Tuesday the 13th. Barring some major disaster, I don't expect anything to happen between now and then. Bears need to now that massive hole under purple support from 1372 to 1383. Not much to stop it there if it enters that zone other than the 1377 top. 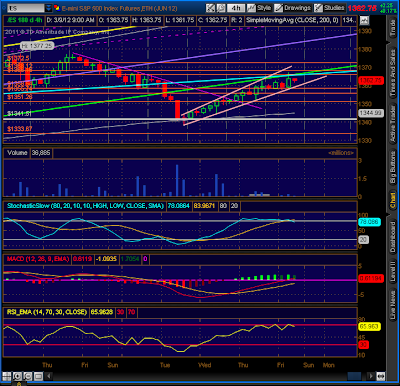 Remain patient. I still contend that something big happens this month to the downside. I hope some of you shorties heeded my warnings at 1341 and has a plan and stops in place. If not, it is not to late to install a plan just in case they continue the improbable ramp to infinity. I like the potential of downside action. I like it a lot, but you have to remain prudent and maintain protection at all times.