All signs are pointing to a manufactured move south to allow for an easier and unchallenged "must have" QE3. This has been a theme of STB since last summer. I was foolish enough to think in August that the "super congress" would actually try and achieve something rather than simply becoming a noisy lame duck. I thought the crash then would be deep enough to trigger QE. Well it did trigger Twist (QE by another name) and allowed the nominal QE3 to remain in the picture as a symbol or promise that more market levitating easing would come one day.
Bottom line is a manufactured move south is coming soon.

The chart in this post inspired mine below. "Reiterating our recent theme, in order to avoid the end of Operation Twist, the Fed's economic outlook would need to deteriorate - which itself is a scenario likely to result in falling stock prices and just as the cause of a 'crash' in PCE towards the end of QE1 and QE2 was a function of higher inflation, we have the current spike in energy prices to ensure this time is no different." Operation Twist Is Coming To An End: A Preview Of The Market Response | ZeroHedge

"Gold will have a “sharp” rally as the U.S. boosts monetary stimulus because of a faltering economy in the coming months, Societe Generale said in a report that was picked up by Bloomberg. Data on U.S. gross domestic product in the first and second quarters will “surprise dramatically to the downside,” the bank said today in a report." SocGen: “Sharp” Gold Rally As US GDP Surprises “Dramatically” to Downside | ZeroHedge http://bit.ly/GCskPV

"The end of the inventory cycle, the pulling forward of demand thanks to the warm weather aberration, and the already clear impact on consumption from higher gasoline prices will likely shift from an overstated economic trajectory to more muddle-through or worse for Q2 onwards." Hatzius On The Three Reasons The Recovery Is Overstated | ZeroHedge

I drew up a new chart yesterday - SPX the effect of QE - At this time it looks like the third 38% retrace and the second test of the 200dma is in the cards near 1125. That is below blue diagonal support, but it seems like the most likely spot for a 20% drop, enough fear to be raised and where they can launch QE3 generating a large enough short squeeze to get price back up to lofty levels by the election. 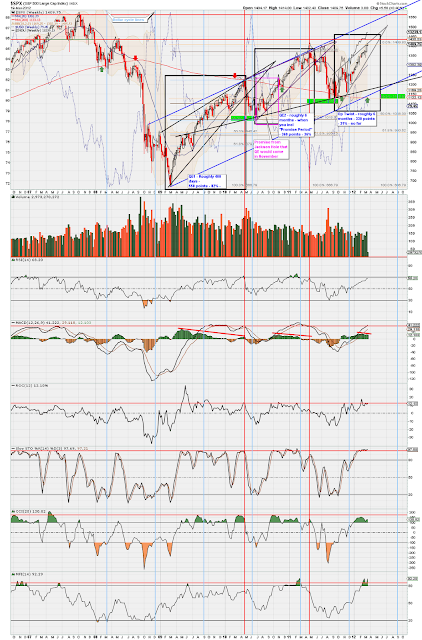 CPC - At levels where market reversal should be in place. 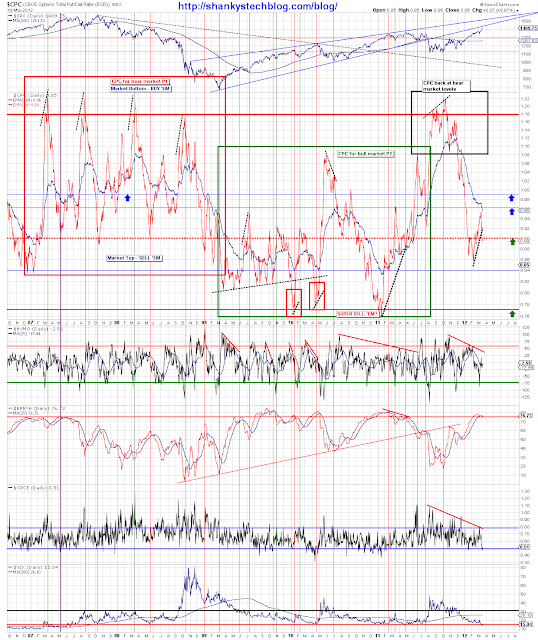 Bullish Percent - At high levels that have generated reversals in  the past and a divergence to price. 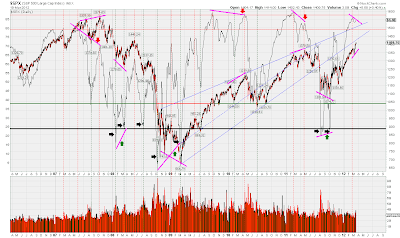 Minis 60m - Purple resistance/backtest has held. Yellow is gone and 1393 is holding. Possible 15 point HnS needs a right shoulder but sets up nicely for a move to green support at 1382. 30m minis are sitting on their 200ma here. If the 1396 level goes, things may just get interesting. As for upside - Pink diagonal near 1422 is it. I got nothing above that. that would be the E touch of the large A-E formation off the October lows. 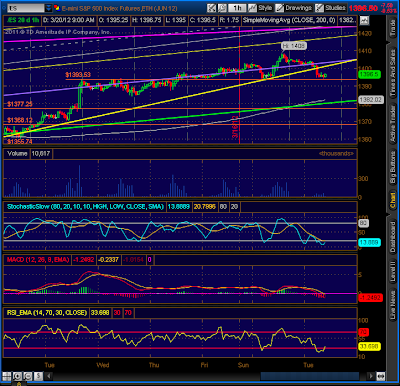 Patience and form. I almost pulled the trigger on calling a top this morning. My internal discussions (mental masturbation) have been priceless. Sorry they are not for public distribution. Following the Fed still rules, and I will have to wait a bit longer. Remember it is more important to get the trade right and not be a perfectionist or a master at maximizing everything. I have said that it is fine to start taking shots up here as long as you have a plan and stops in place. This is not the place to go large. Small trades, test the waters and haul ass if you are not right.  We'll all be able to clearly see when the top is set. I am afraid it will take a catalyst to really get the ball rolling downhill. What that could be is anyone's guess (as bad news is always greeted with joy these days).