I mentioned this in the comments of the AD last night. The post below is absolutely spot on with STB - the Fed sent the EU off on its own and stopped QE2 in June and the lending overseas thus forcing LTRO2 that way they could focus more here and thus the recent 'non-QE' ramp after reloading diring the Aug/Sep fall.

Now they are ready for a massive infusion of QE3 cause it will have to come. This will either (horrifically) be used up here (hello SPX new highs) or to stop a massive move south and to ramp the markets into the election (with the help of a bunch of shorts lined up for slaughter one last time as they are so accustomed to) as I have been looking for.

"All this goes to show that the Fed never had an alternative to pouring money into the system, and indeed has done so endlessly since late 2008, only taking a break in late 2011 when the baton was passed to every other central bank in the world. Now their time is over, and the baton will have to be handed back to the Fed.

Because when it comes to secular market moves, today's little bout of JPM-related euphoria will be truly transitory if not accompanied by much more printing. After all the chart below is exponential and demands a sacrifice soon: perhaps the PBoC will step in briefly, although unlike the other central banks, China's money tends to stick within its own system. As such a far bigger calf will be required."

Is This The Chart Of A Broken Inflation Transmission Mechanism? | ZeroHedge

This market is not real. Everything you know and have learned over the years can be thrown out the window. The markets are rigged. They have to be to keep the illusion alive that all is well and the financial system is sound and safe. Nothing could be further from the truth. Stress tests? Seriously? The banks are insolvent only appearing to be sound thru infusion of Fed (read against our will and without our knowledge or permission taxpayer) funds and FASB accounting gimmicks.

All I see is this top this and that top that and it did this and that fractals that. Fugheddaboutit! NOTHING ELSE MATTERS BUT LIQUIDITY FROM THE FED! All we can do is follow their lead. The Fed is getting harder to predict.

Rich Cash posted a great link last night that had, "The global liquidity cycle has already rolled over...This is comparable to falls seen in mid-2008 in the months leading up to the Great Recession, and which caught central banks so badly off guard...velocity has plunged, with the M2 gauge dropping below 1.6 last week for the first time since records began in 1959...we can expect global growth to peak in May...Stocks usually turn about two months before the real economy peaks...Dallas Fed chief Richard Fisher dismissed talk of more QE was “wishful thinking“. “It is not our job to prop up Wall Street”...So the Fed is hunkering down even though Mr Bernanke himself warns that the US faces a “massive fiscal cliff” later this year as automatic tax increases come into force."

I replied, "Thanks for sharing and I concur 100%, but there is one problem, those statistics are for 'normal' conditions and not a rigged market. Today's market is like no other I know of in history where fraud and corruption rule the day. This top is nothing like the one in 2007. We both know that.

This means they may be able to sustain valuations in a harsh environment for longer periods of time. Of course it also means that when life fails it will not normally correct to an atmosphere with more oxygen so it can recover, it will just die having expended every ounce of life producing matter in its system.

So, does the fed let the market correct and catch its breath? Can the Fed stop another 20% corrective? Does the Fed just leave their bets on the table and let it ride?

The options and variables are not as simple as they were over the past several years. They are compounding now. What used to be a simple QE ends June 30th and the markets will fall has morphed into stealth QE leading to possible QE3 after LTRO2 with PSI that is not settled while the Greek default is still in the air with Spain and Portugal coming fast with oil above $100 and a rising dollar (not to mention many other factors including corruption).

I could go on but I won't. I'm preaching to the choir. My prognostication job has become increasingly more difficult. My 'event' is coming."

And there you have it.

Minis 4hr - Since the turn at 1377 I began looking for backtests. The purple diagonal is the last one and it has held so far. I am very tempted to call a top here, but with EOM statement prints coming and various other factors I can't jump on that train quite yet. I have to stick with what has gotten us to this point which is follow the Fed, patience and form. The one last option is the pink diagonal resistance that you see running off the top of the chart which sits near 1420. 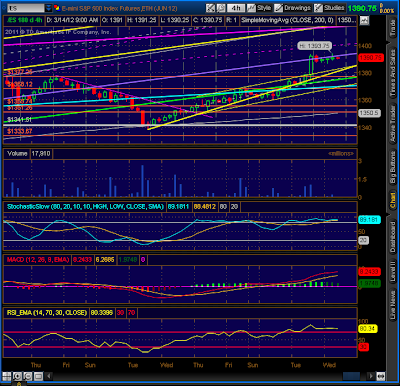 Folks, I am blown away (but really not all that surprised) by this price action. I do believe TA will give us the answer. Numbers never lie. I also believe that an "exogenous event" (as stated here on the blog since 2009) will be what it takes to rip this market from "their" control. That is about the only call I have left from the early days to come home.

Now it becomes a battle of remaining solvent while waiting for the big move south. Keep those stops tight and think scalp. Uz said it yesterday and this is the way I play things these days, think scalp first, place small bets with tight stops and scale in as the tend becomes more clear. If the market moves against you exit and regroup. That is all you can do now. The strategy is not sexy or gonna make you millions, but it will keep you alive and food on the table till the time comes to swing for the home run.

Read the comments for more charts, daily calls and more detailed market analysis and to see what the Core has to say about things.