OK, nut cuttin time. Can they muster something more than a rumor or delay to bring any sort of solution to the crisis? No is my answer. They are out of time and money (well, they will never be out of money, but inflation is gonna kick their ass). The markets love the thought of more liquidity and the rumor mill spewing MSM BS that all will be well and the recovery is steaming along.

Thursday and Friday mark massive moments for Greece and the EU. At this time you must suspect the PSI deal will be delayed, but for how long with March 20th the Due Day for Greece bond payments? Folks this could be it. The 2008 repeat we've all been speculating (with a very high degree of confidence) would return as the politicians and central bankers have done nothing to fix the debt crisis. The Keynesian reflation trade of hyper-repothecation and fractal exuberance has been nothing but a hopium filled game of kick the can. The extend and pretend game is just about over.

So, what rabbit do they pull out of the hat this time. Well the US kicked in their share with ADP and wage increases this morning. That's just great (BS, cough, BS) on this side of the pond. Nice distraction in an election year where oil is over $100, wars about to break out, markets overbought and about to crash and on and on and on. What can the EU pull off to salvage this crisis? Who knows? I honestly do not know what they can do at this point, but they are incredibly resilient (as most are when facing total annihilation).

How bad is it? Read, "In what could prove to be the most critical unintended consequence of the ECB's LTRO program, we note that as of last Friday the ECB has started to make very sizable margin calls on its credit-extensions to counterparties. While the hope was for any and every piece of lowly collateral to be lodged with the ECB in return for freshly printed money to spend on local government debt, perhaps the expectation of a truly virtuous circle of liquidity lifting all boats forever is crashing on the shores of reality." European Banks Now Face Huge Margin Calls As ECB Collateral Crumbles | ZeroHedge

SPX Daily - Other than the lower BB support (which held yesterday) and the 50ma there in nothing to stop price to 1295 other than minor support near 1327 and 1318. 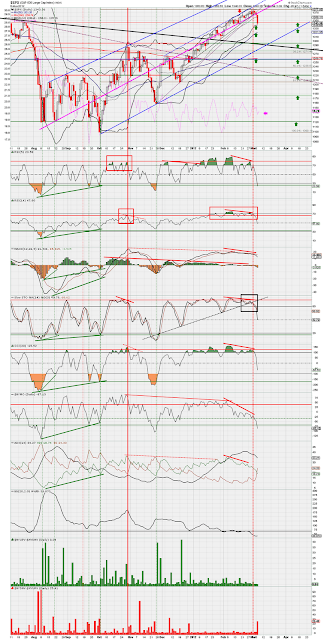 SPX Daily NYMO and ROC - Two of my favorite indicators. NYMO has fallen into the buy zone but ROC is not there indicating this move still has room to run (technically, that has nothing to do with the rumor train that can stop this fall at any moment). NYMO below the green line usually leads to a turn in the near term. 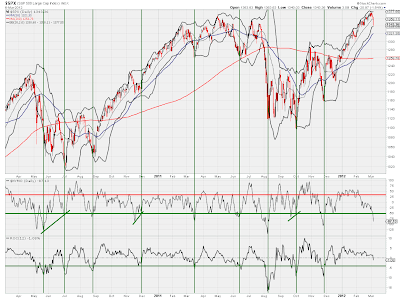 CPC Chart - It is ready and if this is the beginning of a new bear market these are the levels that need to hold. This chart combined with the levels of the VIX is a pretty nasty combo favoring the bears. 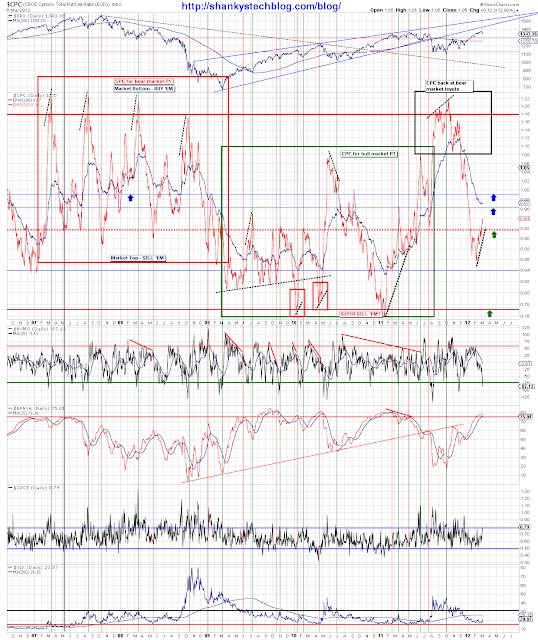 Minis 15m - Yesterday I wanted 1341 and I got it. I then thought a scalp buy at that point would be a good idea and so far that has worked. Yesterday I did a post on SPX Cash Targets you need to see. I will do one today on the SPX Futures. You can refer to these as needed. You know I love the backtest. the only question is where? Will it go for a diagonal (Green, Blue or Purple) or stop at a s/r point like 1351, 55 or 58? Does it want a MA or something? Not sure. Of course looking for a backtest that insinuates I think a top is set. I have not gone there quite yet, but I do think at least an intermediate top is set. More on this in another post. 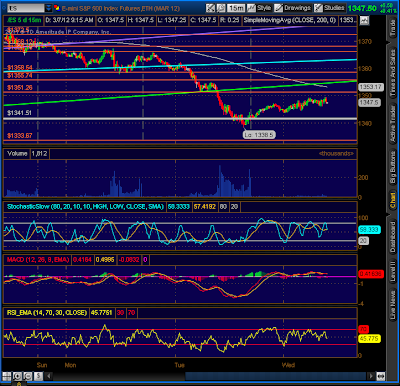 So, look for a backtest and then hold your breath. Rumors, delays, whatever they will do something anything to try and stop this slide legal or not. When this thing turns it is literally going to fall off a cliff. Just in case it does not, have your stops in place and an exit plan. they love to punish the shorts. that is their favorite meal of the day.

As usual, you get all the explicit target and market calls in the commentary.