Since we all know it is all about Greece right now and the key upcoming dates 03/09, 13 and 20), nibble on this, "Greece may fail to garner enough investors to participate in a voluntary writedown of its debt, Der Spiegel magazine reported, citing unnamed officials at the European Central Bank. A second Greek bailout is partly tied to investors’ agreeing to the writedown by a March 8 deadline." Remember that Germany has made it very, very, very explicit that if the PSI fails, the bailout is off... just as they have planned from the get go." Oops: ECB Says Greek PSI Participation May Fall Short, As Troika Expects Third Greek Bailout | ZeroHedge

Not suere how long I have been mentioning these important dates, but "So we have the hard date of March 9 when either the threshold for the exchange is met or not, the imposition of the CAC clause or not, the next “Question” to the ISDA if the CAC is triggered asking if there has been a credit event to trigger the CDS contracts, the possible consequences of a CDS trigger, the decision on the bailout funds by the EU and finally the March 20 hard date when Greece must make its bond payments or default. Guest Post: The Next 15 Days Of Our Lives | ZeroHedge.

Oh and the FOMC meeting on March 13th is a biggie as well. SHTF is about to go down and the markets are ready.

Happy days in the USSR are here again, Purin is baaaaack (well, he never left really). Somehow??? he won the election??? A tearful Vladimir Putin claims victory in Russia's presidential vote; opponents allege fraud - Yahoo! News . Do you think Obummer will shed some tears when he gets reelected? I know I will. Voter fraud here? LOL, that could never happen inn AmeriKa (/sarc).

Breitbart update (for what it's worth, cause you know this is where the coverup really starts) - "The Los Angeles County coroner's office said it is awaiting the results of toxicology tests before releasing an official cause of death for conservative author and activist Andrew Breitbart, who died unexpectedly Thursday at age 43." Andrew Breitbart: Coroner wants to 'cover all the bases' - latimes.com. Cover all the bases, shuh right. More like covering up all the bases.

I updated some charts last night. The monthly is the nastiest of them all. We daily is more than sick. The weekly has finally entered overbought territory but does not have ant divergences yet. Markets are ready, it is just a matter of a missing catalyst or when the Fed is ready to let it correct.

Minis 60m - We had the yellow channel since late December. We then had the blue wedge (now pink dashed. The wedge busted and yellow channel support became resistance 2/15. Also since then the minis have not seen a green MACD hist candle at all. Now we have more recent purple support cracking over the weekend and the development of a new blue support diagonal that held this morning. Near 1351 you can see the next Green support diagonal. Also note that the form of this climb has naturally built in many support areas, but has also left several holes that lack any support at all. Clearly you can see 1358, 55 and 51 support in the chart below. 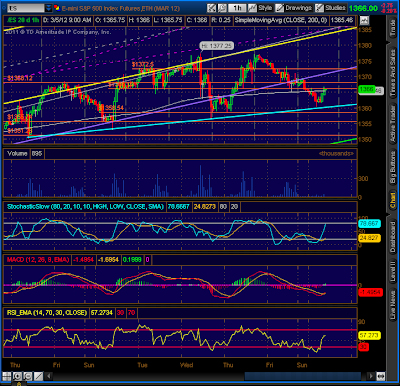 Right now it looks more than likely that a top is set. I have not called it yet, but am more tempted than any other time recently. Why not go out on that limb? The Fed and QE3. I like to thing they are saving QE3 as their last ace in the hole to stop the next crash, but there is the chance (in this election year with oil going nuts) they may pull the trigger up here. We all know they can not let the markets crash, and that any downward momo may be hard to halt.

I'll go deep into the charts tomorrow morning. They are all in the chartbook if you want to see them. We've been ready for a massive correction for at least three weeks now if not longer, and all of us know this fraudulent manipulated POS market does not deserve these valuations. Heck, even some fundamental factors are at levels where the permabulls are starting to question things.

Monthly SPX - Don't look at anything other than the divergences in the indicators. This run is sensationally weak. All those projections (that have been there for well over a year - they are coming. I may update and adjust them a bit for fib measurements and such soon.

As I have said since January, patience and form and follow the Fed. The dates mentioned above can trigger any sort of event, even the big one. Yes, the next LEH 2008 event could literally happen this week. As I have said, I believe we'll all see the turn when it happens this time.